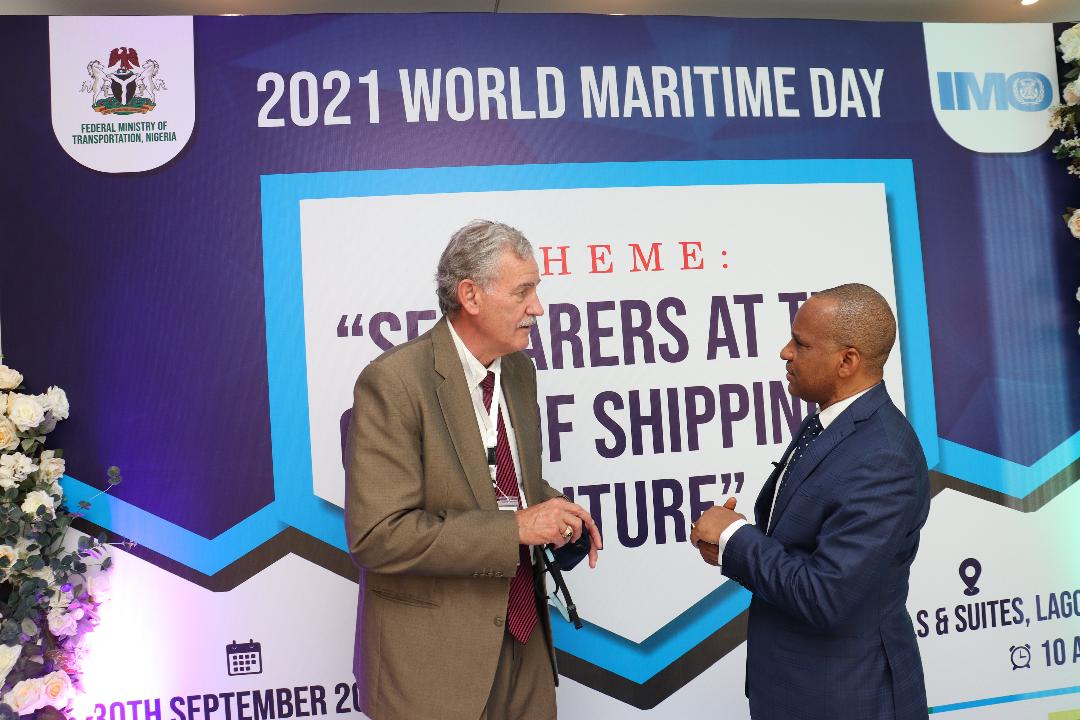 L Babajide Sanwo-Olu, governor of Lagos state has said that Nigeria must take deliberate steps to optimise its rich maritime resources ‘’to consolidate the country’s status as a regional maritime hub’’.

Sanwo-Olu, had stated this on Thursday, September 30, 2021, during the World Maritime Day celebrations, with the theme, “Seafarers: At the Core of Shipping’s Future,” organised by the Nigerian Maritime Administration and Safety Agency, NIMASA, under the close watch of Bashir Jamoh in Lagos, the nation’s Commercial nerve centre, described as ‘‘Centre of Excellence’’.

The Governor who was represented by Damilola Emmanuel, Managing Director, Lagos Waterways Authority, LASWA, noted that “Nigeria needs to consolidate its position as the maritime hub for West and Central Africa sub-regions by fully ‘‘harnessing her maritime resources and ensuring safety and security within our territorial waters and in the Gulf of Guinea.”

The Governor, who could not his feelings had said that, “the maritime industry, the worldover, is a window to economic prosperity and national development’’, stressing that the State has utilised its enormous maritime status ‘‘to foster national unity and cohesion as the Centre of Excellence’’.

Rotimi Chibuike Amaechi, a former governor of Rivers state and minister of Transportation, may have taken advantage of the ‘‘World Maritime Day’’ Celebrations ‘‘to call for more attention to specialised training of seafarers’’, stating that President Muhammadu Buhari, a retired army General, is committed to strengthening the National Seafarers Development Programme, NSDP.

The Minister had said that seafaring had evolved from simple apprenticeship to specialised and rigorous nautical education due to the effects of digitalisation and the emergence of technologically advanced ships.

Hear him: “In view of the emerging realities, more attention should be given to seafarers’ specialised trainings to be capable of performing expert tasks in their various fields of engagement on board vessels.

Jamoh, the NIMASA, Director General,may have gladdened the heart of the Seafarers when he  disclosed that the agency has prioritised their welfare and had continued  to work in close adherence to the standards set by the International Maritime Organisation,IMO, a Maritime agency, of the United Nations, UN, with regard to their ‘‘wellbeing’’.

He had extolled ‘‘the strategic role of seafarers in the global supply chain and commended IMO for focusing on seafarers’ welfare since the outbreak of the COVID-19 pandemic in 2019.

Given an insider information of the efforts being by the agency to improve the welfare of the Seafarers in Nigeria, he stated that they had continued to march in lockstep with the IMO on all matters concerning seafarers since the outbreak of the Asian country of China, emerged coronavirus, popular, COVID-19.

‘‘We were the first to declare Seafarers as Essential Workers on the African continent’’, he had said. He noted that the Maritime Regulatory Agency was encouraged to do so because it recognised that the pandemic had placed extraordinary demands on the seafarers,  during the lockdowns occasioned by the global disease, as the seafarers still remained in service, delivering critical supplies ‘‘to feed and heal a sick and despairing world’’.

The NIMASA, Chief Executive Officer, CEO, who could not hide his feelings , averred that going by the important role played by seafarers in the world Economy, they will, no doubt, continue to remain at the Core of Shipping from past to present to future in line with this year’s theme of World Maritime Day,”.

Adaji, a Rear Admiral, who had represented Awwal Zubairu Gambo, a Vice Admiral and Chief of Naval Staff, CNS, in his goodwill message, had commended the Deep Blue project initiative of the government which is domiciled in NIMASA, assuring of the Navy’s commitment to its successful implementation. Note that the Vice Admiral Gambo led Navy, oversees the operations and maintenance of the 16 armoured vessels for coastal patrol, 17 Interceptor boats and two Special Mission vessels,which is at the core of the project. NAF, under the close watch of Isia Oladayo Amao, an Air Marshall, controls the air wing of the project which oversees the two Special Mission , aircrafts  for Surveillance  of the Nigerian Exclusive Maritime Zone, EEZ, three Special Mission Helicopters, for search and Rescue Operations and four unmanned Aerial vehicles. Indeed, the Naval personnel had been alive to their duties since the deployment of the Special Mission vessels and security assets into Nigerian waters and the Gulf of Guninea, as the Piracy had dropped by about 84%.

Note that the government had made provision for the $195 million that was paid to the Israeli security Company, HLS Systems and Technologies Limited to Supply the maritime security assets to NIMASA.