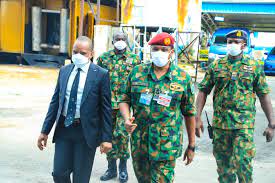 For the past four months, Barshir Jamoh, Director General, Nigerian Maritime Administration and Safety Agency, NIMASA, had embarked  on a sensitisation Campaign that would bring   all the government agencies  that has something to do with water  together to work as a Team in order to deal with the Pirates and other sea Criminals operating in Nigerian waters and the Gulf of Guinea.

In spite of the Wuhan Town , in the  Hebei Province of China emerged Coronavirus, popular, COVID,19, which emerged last March and had a toll on the global economy, leading  to the lockdown of countries and initiation of policy  measures to contain  it, Jamoh, the Director General, Nigerian Maritime Administration and Safety Agency, the NIMASA, may have seen as a source of strength.

Jamoh has had used the opportunity  to reach out to  Chief Executive Officers, CEO, of other government  to drum into their on the need to team up with  the agency  to deal decisively  with the pirates and sea  Criminals operating in Nigeria waters  and which are always attacking ocean going vessels  and kidnap Crew members as many had been rescued through payment of ransomes.

He had started his working visits to the other agencies  CEOs with Ibok Ekwe –Ibas, a Vice Admiral and Chef of Naval Staff. These was quickly followed up with avisit  to Adamu Mohammed, the Inspector General of Office, Hameed Ali, a retired Army General and Comptroller General, Nigerian Customs Service, NCS,Muhammad Babandede,  Comptroller General, Nigerian Immigration Services, NIS and later to Mele Kyari, the Group Managing Director,GMD, of the Nigerian National Petroleum Corporation, NNPC.

Only recently, the NIMASA , Director General took his sensitisation  Campaign to the Air Force in Abuja, the Federal Capital Territory, FCT. The visit was said to have  provided him an opportunity  meet with the Air Force Chiefs and have a one on one discussion with  Abubakar Sadique, an Air Marshall, and Chief of Air Staff .

The NIMASA, Director General, message   to the CEOs of the agencies that had were said o have been visited are the same: the need for Collaboration between the agencies and NIMASA to rid the Nigerian waters and the Gulf of Guinea of the pirates and make it safe for ocean going vessels.

He may have gladdened the heart of Sadique, the Air Force Chief, when he stressed about the importance of   Air Assets to  Deep  Blue Project or   Integrated   National Security and Waterways  Protection Infrastructure domiciled in the agency.

Maritime watchers believe  that  Jamoh , the NIMASA , boss may  have considered the visit to the Air Force  Chief  very important   because of plans to   deploy its  Air Assets in its maritime security efforts, which could only be managed and operated  by the Air Force personnel. The Air Assets and other  security equipment  are being  supplied   by HLSI Security System and Technologies, an Isreali firm, which won the $195 million  security Contract  also includes the  training Nigerian personnel  tackle  Crime along  the nation’s water ways.

An elated Jamoh, had requested  from Air Marshall Sadique, the Air Force   support   for  adequate arrangement of  the two  Special  mission  aircraft that are  expected  in the country from the Isreali security firm  in the next few months which would be delopyed for operations.

Recall the the the  Isreali security firm  had already delivered   17 fast interceptor  boats and 15 Armoured vehicles and two Special mission vessels  and other marine Assets to the agency based on the terms of Contract with the Federal government.

The Air Force  Chief may have drawn the attention of Jamoh, the NIMASA, helmsman, to the Memorandum of Understanding, MoU, that was said to have been  signed between the between the AirForce and the Agency in 2013 under the close watch of Patrick Apobokolomi, the then Director General. The MoU,, the Air Force Chief said was on  ‘’marime Air Surveillance and Intelligence. The MoU, according to Sadique, the Air Force Chief, had  Elapsed,but that had not stopped the Air Force from supporting the nation’s maritime security efforts  by working closely with the agency and the Navy.

He was  said to have told the visisting NIMASA Director General    that the Air Force  under his Command had established a Combat  Reconnnaissance Group, CRG, 203, in Gombe state, north east Nigeria and other parts of the north. The Air Force Chief, disclosed that  the drones that would be  deployed with the CRG 203, could be  moved to any part of the country including the Coastal locations, at short notice.  He noted that the Air Force , had to  support the nation’s maritime environment  because of the crucial place of the maritime sector  to the survival of the country.

He was said to have also told the NIMASA, Director General  of the Air Force Authority  plans  to establish  UAV wings in Lagos,   the nation’s Commercial hub center, Calabar and Port Harcourt , Capital of Oil rich   Rivers state to further  support other government agencies’’ to maintain the  security of the nation’s maritime sector’’.

Given the appeal by the NIMASA boss, to the Air Force Chief to partner  with the agency, Philip Kyanet, a Deputy Director and Head of the agency Corporate Communications said Air Marshall Sadique has  agreed to do everything  within his powers to partner with NIMASA, in order to rid  Nigeria water ways of Piracy and other sea Criminal activities.