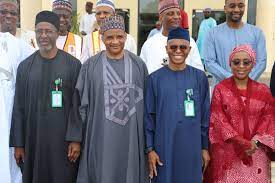 Barely one month after the Nigerian Maritime Administaration and Safety Agency, NIMASA, under the close watch of Barshir Jamoh, sent significant relief materials, to the south west state of Ondo, as part of its Corporate Social Responsibility, CSR, and continuous effort to cushion the adverse effects of natural and ma-made tragedies on the people, the agency on Thursday, September 16, 2021, extended a similar, gesture to Kaduna state.

It was like a home coming, as Jamoh, the NIMASA, Director General, had led the Team that went to the Bandits besieged state to deliver the relief materials, to Nasir E-Rufai, a former minister of the Federal Capital Territory, FCT, during Olusegun Obasanjo Presidency and now governor of the state for distribution to the disaster victims.

An eyewitness account told The Value that El-Rufai, the Kaduna state, governor, could hide his feelings when he saw the NIMASA, Chief Executive Officer, CEO, who has made a name for himself, by reducing to about 80pecent, Piracy in Nigerian maritime domain and the Gulf of Guinea, GoG, and his entourage at the Government House. He was said to have personally come out with other top government functionaries in the state including Balarabe Abbas, Secretary to the state government. Many had described the governor’s reception of the NIMASA Team, as very heroic.

While receiving the Jamoh led NIMASA Team at the Kaduna state Government House, to take delivery  of the relief  and empowerment materials, comprising of tricycles, sewing machines,  grinding machines, sugar cane extractors,  vulcanizing and wielding machines, , amongst others, which is  meant to assist internally  Displaced Persons, IDPs, in the state to ease  their resettlement process in the society, he  alluded to the fact that the agency  ‘’investment   the state educational sector  is an investment for the future’’.

An Appreciative El-Rufai, may have gladdened the heart of Jamoh, the NIMASA boss, when he said the people of the stat are very happy for the agency intervention to help the needy in the state, particular, the educationar, the  Educational sector. He noted that Jamoh has shown ‘’real commitment to the growth of Kaduna state and the country in general. ‘’ He is an asset to the nation’’, the governor had said.

In apparent response to the governor’s remark, the NIMASA, boss gave kudos, to governor El –Rufai, for delivering quality governance to state.  He averred that the quest ‘’to support the efforts of the Kaduna state government in integrating the IDPs into the society was the driving force behind the agency’s intervention.

He opined that they have decided to heed the call for call to state government to integrate IDPs, into the society. According to him, 2 states, so far, have been attended to including Kaduna, being the 27th.  ‘’Our aim is to ensure  that displaced persons, across the country regain a normal life and attain self- reliance without being a burden to the government.’’.

Given an insider information of the presentation of the relief and empowerment materials to the states, he disclosed that the agency intervention is in three categories, income-generating Palliatives to facilitate means of livelihood,for direct and indirect self-employment,  food items and educational materials. ‘’We acknowledge the fact   that education is the key to capacity development and nation building’’, he had said.

The NIMASA , officials may have also taken advantage of being Kaduna state, to extend the same relief and empowerment materials to Gombe. The agency officials were said to have also gone to  Zamfara, describe  as home of the Bandits, which Ibrahim Dosara, the state Commissioner of Information  has 100 Camps , scaterred all over the state and 32,000 followers , who carry regular attacks on Communities , schools and kidnap of students and other highly place individuas in the state for ransom.The  recent attack  and kidnap of  Hassan Attahiru, the Emir of Bagudu, Emirate Council in the state, speaks volume.

Danjuma Goje, a former governor of Gombe sate and now , a Senator  of Federal Republic of Nigeria,  and the hallowed Chamber  Marine Transport Committee Chairman,  had commended  the NIMASA ,Management  for the timeless intervention  in the states to support the IDPs, of natural and man-made disasters.