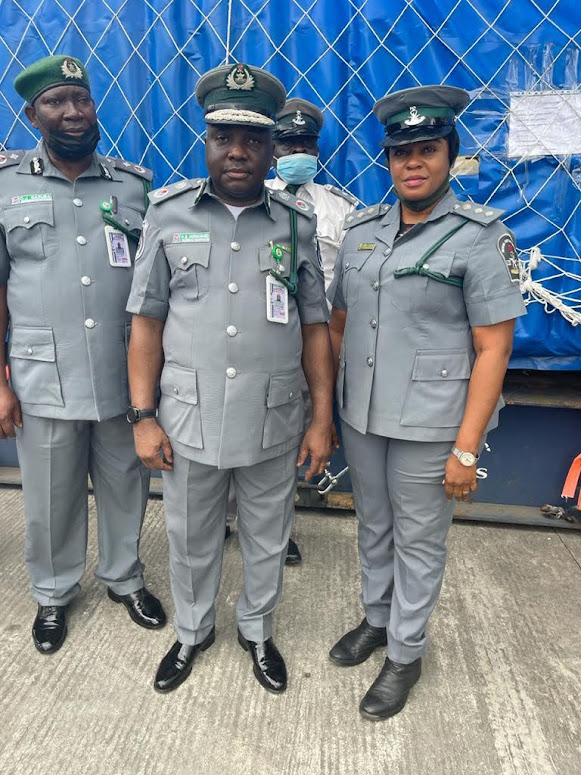 When Hajia Zainab Ahmed, minister of Finance Budget and National Planning, disclosed last May that the Federal government have concluded arrangement to purchase new scanner machines for the Nigerian Customs Service, NCS, to be used as a’’ stop-gap measure’’ in its operations, from the Asian country of China, the House Committee on Customs had opposed it. They have their reason.

They had argued that there was no point  to purchase  such new scanner machines for the Hameed Ali, a retired army Colonel led , NCS,  while the 22 old  ones that was  procured  at the cost of $20 billion  during Olusegun Obsanjo Presidency are still  wasting  at the Lagos ports of Apapa, Tin-can , Port Multi-services Terminal Limited, PTML, and Rivers port including the Onne port.

The House Committee  had made their feelings known  at a public hearing on the ‘’Lack  transparency  on the transfer of the  technical know-how  from cotecna Destination Inspection Limited, Societe Generale De Surveillance and Global Scan Systems to Customs in2013,  but that was how far  they could go.

In 2018, Kemi Adeosun, the then minister of Finance, Budget and National Planning, had said that the government had approved $8.47billion for the purchase of three units of Rapid Mobile Scanners to be deployed for Customs operations at the seaports after four years of failed attempts.

Hajia Ahmed, his susccessor, may have shed more light on the planned purchase of the new scanners, when she averred that it would be purchased by Central Bank of Nigeria, CBN, under the close watch of Godwin Emefiele’’ to boost trade facilitation’’.

Despite the strong opposition that was said to have been mounted by the House Committee on Customs against   the acquisition of new units of scanners by the government, the service at long last have received the scanners from the oversea Manufacturers which were said to have been distributed to the seaports to further enhance the officers and the exigencies examination of Containers and improve the Commands revenue generation.

Only recently, Auwal Mohammed, Comptroller, PortHarcourt Area II, Command, took delivery of one of the newly purchased cargo scanner Machines at the port. The scanner, which is a product of Nutech, was said to have been brought into the south east port by Maersk Karun vessel from Shanghai, a city in the Asian country of China, with model number MT1213DE.

An elated Compt. Auwal, who could not hide his feelings had described the arrival  of the scanner  as a ‘’positive milestone  in the service efforts to modernise  its operations, achieve ease of doing business, facilitate trade and enhance  security  with easier detection of prohibited imports’’.

Recall that since 2013, the Customs officers and other security agencies personnel at the seaports, Murtala Mohammed International Airport, MMIA, Ikeja, Lagos, Aminu Kano International Airport, Kano, have been involved in the physical examination of cargoes and pellets respectively had done it manually. This is the scanner machines , handed over to the NCS, by the service providers had broken down and could not be be fixed by the Customs Authorities.

The Onne Customs Command, Ara Comptroller, had said that ‘’the  tortuous processes involved in the physical examination of Containers is not  only time consuming  but not as perfect as when the Container is examined with the scanner’’ . He is right.

Some of the re-examined Containers were said to have been found with offensive cargoes that had contravened the government Fiscal Policy and subsequently transferred to the Government Warehouse either for outright seizure, depending on the gravity of the offence or the importer, slammed with a Demand Notice, DN, running into millions of naira and penalty fee, which the individual or Company must pay before taking delivery of the Consignment. The Command was said to have recovered billions of naira, for the government, at the exit gate alone. This is lost revenue that could have entered into private Accounts.

Giving an inside information of the performance of the Examination officers prior to the arrival of the scanner machine to the port,  the Customs Comptroller had said that the  examination officers and the exigencies  could only handle  about a hundred Containers daily because of the cumbersome processes of discharging  the goods in the Container positioned for examination  by West African Container Terminal , WACT, the terminal operator , which had   engaged the Labourers  to do so .

The essence of bringing out the goods  from  the Container by the WACT, the terminal operator,engaged Labourers, under close monitoring, according to the PortHarcourt Area II, Comptroller, is to ensure that is found in the Container tallies with the declaration of the importer in the  bill of laden for proper examination. The conclusion of the exercise would facilitate the return of the goods into the Container and another Seal placed on it.

The Onne Customs boss, who could not hide his feelings had said that with the acquisition of the new scanne, the Customs examination officers and other exigencies, will be able ‘’to carry out examination on two hundred  Containers on a daily basis’’ with the use  of the scanner x-ray’’.

Perhaps , to avoid a repeat of what happened when cotecna and the two other service providers handed over the responsibility of operating the  22  old scanners used at the seaports, International airports and Lad borders , across the country,  to Customs as the facilities broke down with ease due to poor management, Comptroller Mohammed , may have spoken the mind of the Customs Comptroller General, when he said  the examination officers would undergo  training in operating the scanners.Already at the Onne port,  the Customs officers on scanning operation  are currently undergoing  refresher training  to update them  on the latest technology’’.

According to Ifeoma Onuigbo Ojekwu, a Deputy Superintendent of Customs and the Command spokesperson,’’ any Consignment found during the image analysis of the contents of the Container to be carrying  suspected  prohibited item or involved in Concealment  would be subjected to physical examination’’, meaning that the importers problems are not yet over.

Informed sources told the value News that officers at the Command exit gate have gone back to the drawing board to restrategise on how to deal with the importers whose Containers have gone through the scanning process without the government losing any revenue.

Many believe that even without the deployment of scanner machines to examine Containers at the Onne port, the Command, trough physical examination of cargoes, which is very limited, could generate, N5 billion, in a month, it means, that that the monthly revenue of the Command monthl revenue generation would double over the anticipated increase in the number of Containers that would be examined daily, from the  current 100 Containers to 200 Containers per day.  Compt.  Mohammed may have prepared for the challenges by blocking all the areas of revenue leakage with the use of scanners to examine Containers, warning the officers ‘’to avoid Compromise and ensure that the right thing is done’’.