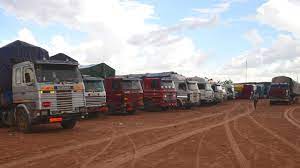 Between  August, 2019 and December, 2020,  Patrice Talon, President of Republic of Benn ,, whose country economic survival  depends on duty collected from transit goods,  had suffered major economic losses. The situation was so bad in the neighbouring West African country that the Beninois President was  forced  to engage the services of  Nana Kuffo-Addo, the Ghanaian President to plead with Muhammadu Buhari, a retired  Army Genera to reverse the decision.

Prior to the involvement of the Ghanaian President in order to facilitate the reopening of the closed Nigerian Borders with the neighbouring countries comprising of Benin, Niger and the Central African country of Cameroon,  on Talon was said to have made  several efforts to talk to the the Katsina state born Nigerian President  to reverse the decision  which had somewhat distabilised the country’s economy.  On Thursday, January 9, 2021, the duo met behind closed doors at Abuja, the Federal Capital Territory, FCT, to rub minds on how to handle the issue to avoid a repeat in the future. Because of the activities of  Smugglers operating between the two countries.

Aware that most of its Nigerian Transit cargo importer Customers have abandoned the Autonomous port  of Cotonou  and Bollore port, the toe  two seaports  in the country traditionally used and relocated,  to Ghana, Coted’Ivooire and Togo, all member countries of the Economic Community of West FRICAN States, ECOWAS,  seaports, to take delivery of their imports meant for the Nigerian market may have  forced the Benin  government officials to go back to the drawing board to decide  on how to collect duties from the Nigerian bound Truck laden cargoes.

Note, that the Nigerian Manufacturers, also export their ECOWAS, Trade Liberalisation Scheme, TLS, goods, manufactured goods t through the Seme and Ilakoji border from Nigerian to other West African countries by road,  and which must pass through Seme and Ilakoji, a border Community between Benin and Togo.

The fallout, according to an informed source  was the decision by the Beninois government to impose a new import duty  of CFA 9million, equivalent of N6.5million on each transiting truck, whether from the  country’s seaports or Ghana, Cot d’Ivoire or Togo passing through the country or cleared from the country port or manufactured from the local  Industries.

Talon may have  sent a message to Buhari, with  the outrageous duty imposed on  each  transiting Truck laden with goods through the country borders to prove to  the Nigerian President that  that Benin may Small but it can bite.  He was said to have  told  those that cares to listen that the country  generated more revenue during the border closure than now that it has been thrown open

The country officials  had claimed that the  transit cargo  importers who had relocated  to these other West African countries  to take delivery of their cargoes  are not doing the right thing  as they  import foreign goods , claiming t that they were ETLS goods. The implication of the accusation of the Beninois Government officials was a clear indications that this was what the Transit cargo importers were.  doing in their country but were covered by the Customs Authorities.

This  is because of the revenue accruing to the country from the deal to the disadvantage of the Nigerian government..  Many believe that the Beninos  government  gave room to the Nigerian Transit cargo importers to relocate  in large number to these other ports in the West African  sub-region with the new  imposed Tariff on  each transiting truck laden with cargo passing through the country.

A top official of the ECOWAS, Secretariat, at the Seme/Krake , joint BoRder ,  between Nigeria and Benin Republic,  who is worried about the action of the Beniinois Authorities  to make things difficult for Nigerian Transit cargo owners disclosed  that  that what Talon and his Customs Authority personnel is bad. The official noted that there was  no basis for the Beninois government  to have imposed such outrageous  duties  on each truck laden cargo  passing through the country into the Nigeria side of the border  for proper documentation  because the goods  are exempted  from all  forms of  duty  under the ECOWAS, which is an economic bloc,  protocols on Transit goods.

The situation is so bad that the Leadership of the Association of the Nigerian Licensed Customs Agents, ANLCA, had taken up the matter with Yusuf Tkur Buratai, a  Lt. General , rtd, and a former Chief of Army Staff and now, Nigerian Ambassador to Benin ,  about the plight of the  Imports and exporters, who are mostly , Nigerian , Manufacturers in the hands of the Beninois Authorities who are desperate to collect duties on their transit Trucks laden with goods both within and outside their country. The ANLCA, officials were said to have also met with the Beninoois Customs officials at the ECOWAS Secretariat to discuss the issue but were told that it could be resolved at a government to government level. Many see it  as President Talon , partial closure of the border with Nigeria  as economic and social activities have been grounded to a halt at the land border. ‘’There is no activity going on at the border Community ‘’, an officer remarked.

The refusal of the Nigerian Transit cargoes  importers  and exporters to pay the outrageous duty imposed  on each of their trucks laden  cargoes may have forced them to abandon over 3,7000  Nigerian bound  Trucks, which they claimed were loaded with   ETLS  goods at Ilakoji, a border Community between Benin and Togo  but the Beninois government would not agree.  ‘’The goods were not produced in West Africa’’, Beninois Customs Authorities insist.

An agent who spoke to The Value News disclosed that if its possible for Aliko Dangote, President Dangote Industries to find alternative route of delivery the Company Cement to its Togo, Niger, Ghana and other West African countries, without his Trucks passing through Ilakoji border to  be harassed by Beninois Customs personnel  for payment of the CFA 9 million, on each of his Company export cement Trucks

Until  the Benininois Authorities  came  up  with the outrageous  Transit cargo import and export duties, Dangot Industries, alone  had  dominated the xport market in the West African  subregion. Virtually every week, scores of Dangote Trucks laden with cement line up the Badagry –Seme route  heading to Ilakoji Border enroute to Togo, Ghana and Cote d’Ivoire  while some of the  Tucks ended up at Benin.

Take for instance , btween January and March alone, Mohamed Jibo, Comptroller, Seme Command, overseeing what ought to be African busiest border had revealed   that the Command  recorded a  Trade volume  of 348,827,775 metric tons  exported goods with a Free On Board, FOB, value of about N4.3 billion.  The  country  export volume was said to have grown in the second quarter of  2021, but forced to drop  with the Beninois government  imposed CFA9 million on each transiting Truck laden with cargoes passing through  Ilakoji border  enroute to Togo, Ghana and Coted’Ivore.  There have been mixed reaction over the Beninois government action.

Kayode Farinto, National Vice President, ANLCA, who has been in the News in the recent  times,  had appealed to Nigerians criticizing the Talong government  action  to do a rethink.

He believes that   the Law of reciprocity, meaning that whatever you give, you get in return from your neighbor may have forced the country to impose the bill on the Nigerian Transit cargo importers and exporters. He noted that that when the Nigerian government implemented the border closure policy in 2019, it did not take into consideration   that it was a signatatory  to the ECOWAS  Protocol and Convention. Nigerians had shouted that it should not exceed   one month but it lasted over a year, forcing the People of Benin, Niger and Cameroon, to cry out.

Farinto, who could not hide his feelings had said  that  if the Beninois Customs personnel at the instance of Talon,  are now stopping  Nigerian bound Trucks laden cargoes from passing through ILakoji, a  border Community with Togo, enroute to Nigeria,  ‘’we should not Complain’’.

Maritime analysts believe  that the subtle war that had been  declared on Nigerian by Talon has opened people’s eye to the rot  that had been going on at the Seme border over the years with the active connivance of the Beninois and Nigerian Customs personnel.

This may have informed why Hameed Ali ,a retired Army Colonel  and Comptroller General, Nigerian Customs Service, NCS,  has promised to investigate the allegations of the Beninois Customs Authorities that what the Nigerian Transit  importers  claimed were goods manufactured within the West African  sub region were actually Foreign goods, mostly manufactured from the Asian country of Nigeria but repackaged in these countries. For the Nigerian market.

Lucky Amiwero, President , National Council of Managing Director of Licensed Customs Agents , NCMDLCA, may have differed with Farinto, the ANLCA, Vice President.   He had said that  the Beninois government decision ‘’ to block Nigerian bound laden Trucks with cargoes  from transiting through Ilakoji, border with Togo, violates   all ECOWAS Protocol  on free trade, particular, on  the ETLS ,goods.

He haad alluded to the fact that the Nigerian Leader may have  initiated the war when   it closed the border with the neighbouring countries of Benin, Niger and Cameroon for over one and half year, describing it as’’ a big mistake’’. According to him, Benin Republic’’ rely on Nigeria to survive’’ insisting that ‘’there is something that may have forced  Talon, the Beninois President to approve the CFA9 million or N6.5 million  Transit import and export duties on each Transiting  Truck through the country.

Muda Ysuf, a former Director General, Lagos Chamber of Commerce and Industry, LCCI, on his part, described the stoppage of the over 3,700 Nigerian bound Transit cargoes from Ghana, Cote d’Ivoire and Togo,  at Ilakoji border, enroute to Nigeria, as  a ‘’threat  to economic integration in Africa’’.