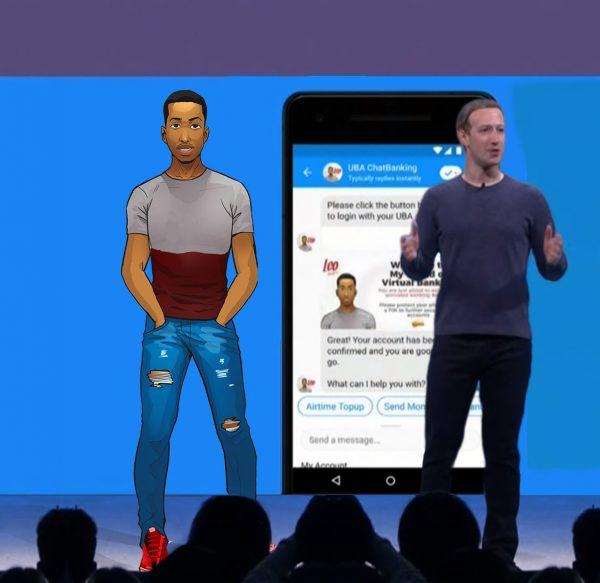 Between January 1,2018 and now, United Bank For Africa, UBA plc, popular, Pan African Bank, has  won the hearts of its customers with its artificial intelligence chat bot, LEO. The Chatbot, according to informed source has proven ‘‘to be the most formidable artificial intelligence chatbot date, serving an ever-increasing clientele who now have less transaction hassles to worry about’’.

Note that Leo, which is an AI chatbot for banking services is currently available on Face-book Messenger, WhatsApp, Apple Device and is set to launch soon on other social media platforms, The Value News was reliably informed.

An insider informed The Magazine that LEO was developed with a firm resolve ‘‘to prioritise its customers as well as put the bank at the heart of disruptive technologies that will transform the experience of its one million users that had hooked to it in less than three months of its inception.

Given an insider information, a top official of the Bank  who spoke to The Magazine disclosed that in Three years  of its operation, over 3 million customers had hooked to it and the number is still increasing on a daily basis, an indication that UBA’s LEO, has without doubt, remained ‘‘the smartest Banking Chatbot in Nigeria because of its speed and quick learning intelligence’’ and has continued ‘‘to evolve with plenty to offer its teeming customers.This may have put other financial institutions in a very difficult situation  as they struggle to develop a similar product that will compete with the AI, UBA’s LEO, which has become a ‘‘massive success’’. There is no gain saying the fact that as the AI LEO continues to consolidate on its successes and accolades winning several awards overtime, it has become the envy of other Banks.

Given the massive success achieved by the UBA, AI LEO product, it was said to have continued’ ‘to enjoy periodic and systematic upgrade’’ with special emphasis on enhanced advancements and specialised unique features which have clearly earned the chatbot over 3 million Users

Kennedy Uzoka, the Group Managing Director/Chief Executive Officer, CEO, of the Money deposit Bank, MDB, has affirmed that UBA customers,indeed had agreed that LEO is one of the bank’s biggest investments in cutting-edge technology and has been steadily changing the face of  banking in the African continent.

Uzoka, who could not hide his feelings had said that “UBA’s vision has always been and will remain a dominating force in Africa’s digital banking space’’, noting that ‘’its resolve is to provide unparalleled experience across all channels’’.

Hear  him: We are a technology-driven institution with vast knowledge in the business that we do and LEO, being a tested, dependable and intelligent personality, replicated on WhatsApp the success it had recorded on the Facebook Messenger platform where it started its journey and later on the IOS, iPhone Operating System, platform.

He opined that ‘‘It is a solution that is from the customer’s standpoint, easy to use by anyone regardless of demography, always ready and waiting to help with any form of banking service,”, he had said.

“As an app that has been in existence for over nine years, reaching more than 1.5 billion people in over 180 countries, WhatsApp has become very essential in lifestyle and that is why UBA saw the need to include LEO’s services in that very important app and the premium private chat platform has assured that there will be no spam messages, as the development is to enable businesses serve their customers with useful information,” the UBA GMD, further stated,

He explained that LEO is already present in over 20 African countries and in three languages and has a number of rich and robust features bound ‘‘to mesmerise existing and potential customers with services that are extremely fast and secure as all transactions and enquiries are encrypted, end-to-end’’.

An elated UBA plc, GMD pointed out that, customers who have engaged with LEO are more than delighted about their experience and credit it for automatically extracting account details without hassles, adding that “Testimonies abound about how it is generally easier to use LEO compared to its counterparts. For example, LEO automatically detects account numbers via a customer’s WhatsApp mobile number and goes ahead to seamlessly help customers check their account balance as well as top-up airtime”.

Reviews from customers note that LEO is more personable, more humane, and it feels like talking to an experienced customer service/Fulfilment representative. The Bot also allows customers to easily lodge and process complaints with adequate and timely feedback.

Notwithstanding the Bank presence in 20 African countries, offering specialized Banking services to Customers, it has established presence in the  North American country of the United States, US, the United Kingdom, UK, and France and working its way to enter into the Asian country of China market, where Nigerian importers source most of their goods that lands at the Lagos ports of Apapa, Tin-can island, Port Multi-services Terminal Limited, PTML and the south east ports of Onnne and Rivers port, PortHarcourt including Delta port Warri and Calabar port, Cross river state.