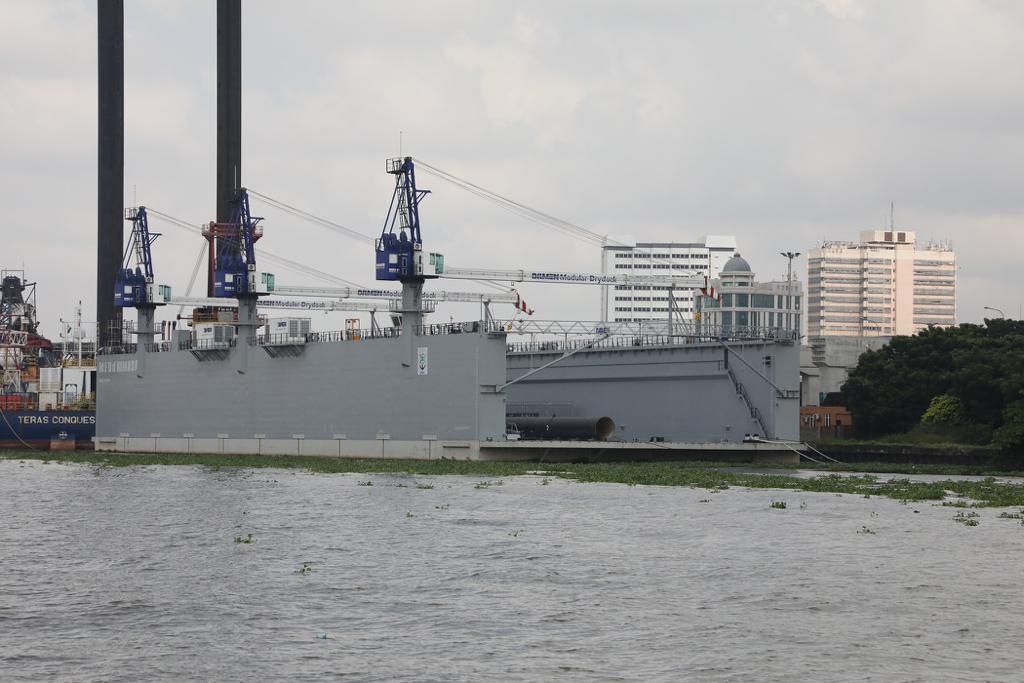 Hopes brightens for the deployment of the N50 billion modular floating dockyard which was delivered by the Nigerian Maritime and Safety Agency NIMASA, by the European country of Holland, Shipyard in June 111, 2018, for dry docking of vessels. The modular dry dockyard has been idle since it was delivered to the Maritime Regulatory agency by the European shipyard, Manufacturers between June 11, 2018 and now forcing the shipping Companies, to dry dock their ships outside the country.

The determination of the Bashir led NIMASA, to deploy the Floating  dock in order to statrt generating revenue , may have informed why it had presented the outline Business CASE, OBC, to the Infrastructure Concession and Regulatory Commission, ICRC, with the support of Rotimi Amaechi, a former governor of Rivers state and now minister  of Transportatin for  approval.

The ICRC, has been in charge of the mode of operations of the floating dock, ever since the agency made its intention known to deploy the Floating dock into operation.  The Commission had been whether the operation of the NIMASA owned dry dockyard would be based  on Public, Private  paternership PPP, arrangement or not. The Commission may have taken a closer look at the modular floating Dock Yard based on the OBC, present to it by the Maritime Regulatory agency which was very convincing.

The ,ICRC  officials  , OBC, assessment of the NIMASA Floating  Dockyard, OBC, may have informed why  the Commission has found it necessary to issue  a Certificate of Compliance to the agency, as a prelude for the deployment of the dry docking facility for operations.

Michael Ohiani, the Commission,acting Director General, who was said to have led a  team of the ICRC officials to the NIMASA headquarters in Lagos to present the OBC certificate of the modular Floating dock to Bashir Jamoh , the Director General of NIMASA, was said to have given kudos to him and his Management Team, for keeping the Floating in good working Condition despite not being  put use  since the agency took delivery of it from the Manufacturers in 2018.

Ohiani had said that ‘’the agency’s OBC, for the Modular Floating Dockyard’s management contract to be operated,  maintained, and transferred under Public Private Partnership, PPP, arrangement was in compliance with the ICRC Act 2005 and the National Policy on Public Private Partnership’’. This may have given the NIMASA, Director General,to go ahead with the plans to deploy the Floating dock into operations without further delay.

Jamoh, the NIMASA, Chief Executive Officer, CEO, who, who could not hide his feelings while receiving the Certificate of Compliance for the Modular Floating Dockyard from the ICRC, acting Director General,has described as ‘’a national asset’’.

He was said to have assured the ICRC,boss, that ‘’the Agency was committed to the careful deployment of the dry dock in line with relevant regulatory instruments to ensure wealth creation, job creation, and revenue generation for the Federal Government’’.

Given an insider information on the OBC, which was presented to the ICRC for approval, he noted that ‘’issues, such as ‘’security, accessibility, and existing complimentary infrastructure on ground, were considered in the development of the OBC, for the dockyard, which will be managed on a PPP basis with NIMASA and the Nigerian Ports Authority,NPA, on the one hand, and a management company, on the other  hand .

I The CRC Leadership, had said that ‘’the Commission would closely monitor the entire implementation process to ensure equity, fairness, and profitability for the Federal Government’’.

‘’An elated Jamoh, had said that “It is one thing to have the Modular Dockyard, and another thing to enjoy patronage that would be a profitable venture for government’’.  He alluded to the fact that much funds have been invested in the project and it cannot serve just as a workshop for an institution of learning, as being inferred in some quarters.

He is right. Until his removal as the Director General of NIMASA, in March 10, 2020, Dakuku Peterside, had said that the idle NA50 billion, dockyard, which ought to be a money spinner for the country was gulping close to $30,000 per day for maintenance, which translates to about $10, 400 million yearly in demurrage charges based on the prevailing exahnge of N97 .00 to the North American country of the United States, US, then.

It was estimated that the Floating dockyard, if put into proper use would save the country $100 million annually from the dry docking of vessels operating in Nigeria, but which was currently done outside the country.

“Detailed investigation has confirmed that the dockyard cannot berth at Nigerian Maritime University, at Okekerenkoko, Gbaramatu, in the south-south state of Delta, as earlier proposed for it by Peterside, the ex-while, Director General of NIMASA, who took delivery of the Floating dockyeard from the Manufacturers in 2018.

.’’ We got approval from our supervising ministry to deploy the asset on a PPP basis and we are working in conjunction with the Nigerian Ports Authority’’, the NIMASA, CEO, had said. He further stated that the agency arrangement to utilize the NPA, facilities at the Continental Shipyard in Apapa is still very much on course.”

The NIMASA, boss, had told the those that cares to listen that ‘’the seeming delay in the deployment of the Floating Dockyard for operations, between, June 11, 2018 and now was basically due to the fact that ‘’attention was only being paid to other details to ensure duediligence, compliance with due process and the eventual durability of the project when it becomes operational’’.Giventhe ICRC experts, study of the OBC, presented to the Commission by NIMASA may have, may convinced oHIANI, the ICRC boss, that the Floating Dockyard is a ‘’profitable investment by government’.

Jamoh, the NIMASA, boss, has known that the modular Floating dock was a worthy investment for the nation that he had said that the high profile equipment would generate N1 billion monthly by the time it starts operations. This would translates to about N12 billion in a year, which is very encouraging.

Indeed, the agency may have come out to boldly tell the industry stake holders that it is now ready to deploy the Floating dock into operations because of the close working relationship with   NPA, which have the expertise on dry docking of vessels.

+. He may have shocked industry stakeholders when he stated that the deployment of the Floating dock for business would be based on ‘’due diligence and effective implementation with NPA, in line with the approved ICRC, OBC, to ensure the durability of the project.

He may have gladdened the heart of Nigerians, when m he disclosed that ‘’the project is bankable and sustainable’’, insisting that the Nigerian government will get the value for money invested on the project.

Many believe that the government would get value for the project if the ICRC, could get   the best concessioner to provide the services out of the tens of companies  to take over the Management of the Floating dock  on a PPP, arrangement.

Informed sources told The Value News that the successful Concessioner, that would take over control and Management of the Floating dock, would run as Profitable business venture.  This is because the NIMASA, Management Team, has concluded plans to prepare   a full business case which will be taken to the Federal Executive Council, (FEC, for approval to be handed over to the Concessioner to implement. ‘’it is a deal’’ an insider said.

There are indications that the“ICRC would still manage the process of the Floating dockyard, which Osagie Edward,  an Assistant Director, in the agency Public Relations Department would be concluded before the end of the year.

Jamoh, the NIMASA helmsman,,has assured ship owners, that the agency would do everything within its powers to ensure that ‘’the  concessioner does not charge arbitrary fees when the Floating dock becomes operational. ‘’It is a total package we are delivering to Nigerians and we seek their understanding and patience, he had said.