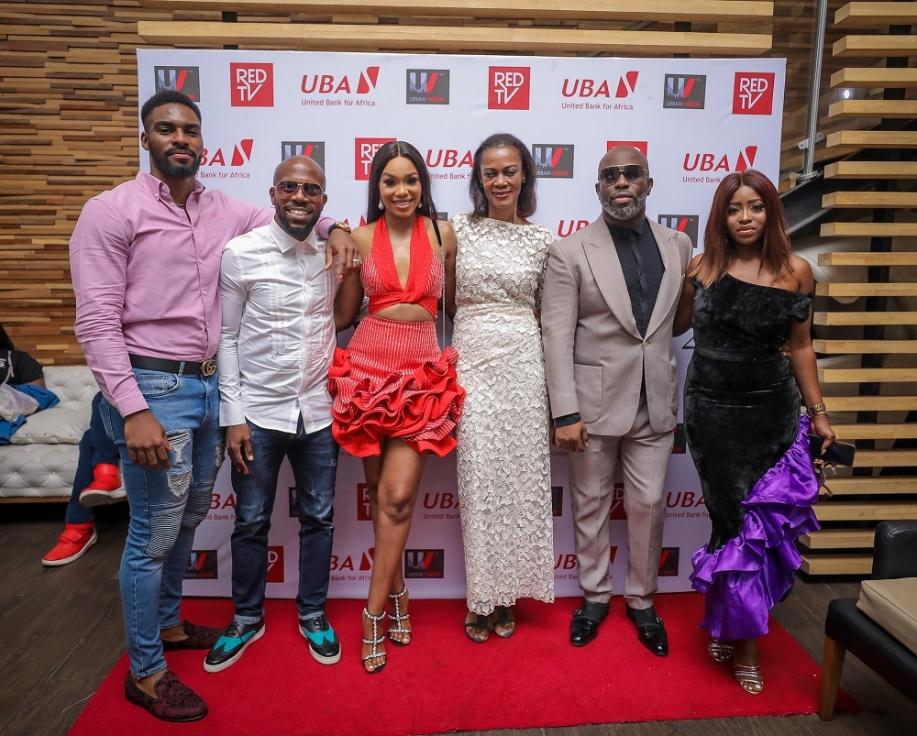 Last Saturday,  the Bank, gave meaning to the in a very ur event in Lagos. Eyewitness account the set up of the stage, the the event’s hall was the euphoria of excitement. Note that was finally over for the first season was said to have taken place months ago.

As a prelude for the sponsorship of the season  two thriller also in Lagos, the nation’s commercial  centre,  a private screening was said to have been held  at the IMAX  Filmhouse  Cinema, Lekki.  A Statement by the Bank  confirmed that  in attendance at the screening exercise were the ”cast , crew and Industry supporters”.

Given a further insight into the screening, the Bank   disclosed  that  a little  waiting room held a re-enacted set   from the show’s  opening  montage,  signature cocktails , mock tails and delicious canapes were served .

It was is who in the nation’s entertainment  Industry, particular Lagos, were at the event.  They were  Kemi Adetiba, Igwe, Eku Edewor, Ashioonye Racca, Bola Atta . The guests were said to have favorites season pictures and interviews.

Obinna Okerekeocha, Creative Director, REDTV,  according to the Bank sources, was said to have ushered invited guests   into  the screening Hall , intimating them  and Fans  about the new season  which is expected to bring new dimensions into the Industry amidst cheers.

Many believe that REDTV,  has taken drama to another level  in the country ”and still not scared   to push the boundaries further. ” at REDTV, ,  is to ”  The Men’s Club is real, stressing that  ”it is” inspirational and relatable’.

He noted that the  country’s  cinematography  and scores  of films are top class  and its wonderful to see  how  the lead actors  have grown.  He averred that the season two thriller    is going to be a ”bigger hit  than season one ”. Appealing to guests and Fans to spread the message,  he urged them, to ”invite  friends  to subscribe  on the REDTV”.

It is not surprising REDTV Executive the TV a ” had put  the with the support of the African leading Commercial Bank, UBA.  This in addition to the most  talented , creative minds a new putting that .

Insiders disclosed that as ”end on the screen, the Hall was applause.  Bola Atta,  one of the notable Executive Producers who gave the closing her utmost the” UBA sponsored  Men’s Club show Entertainment had gone beyond expectations”. She gave Kudos to the Bank for their endless support to

The events was said to have come to a close  with the final address   from Odunsi and Akins  , popular AK Akinkungbe , returning immense gratutude  to the each of the actors involved in the Men’s Club  and the Crew behind  the scene, thus reminding   the guests  that it is easy  to see the finished  show  but every person who had contributed to the success of the show desreve commendation.

indications that the Men’s season drop on ”, today,(Thursday), May 23, 2019, on the REDTV Channel.  Those who had subscribed to the  TV the UBA sponsored network   can entertain and very rich the African Entertainment, fashion, News, Music,  Movies and much more.