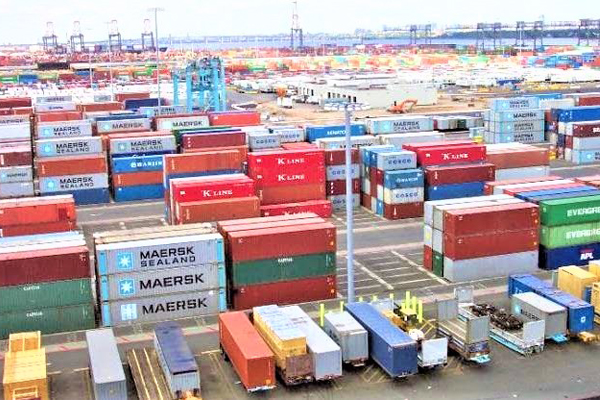 Prince Segun Oduntan, Chairman , Association of Nigerian Licensed Customs Agents is not  a happy man. Oduntan source of unhappiness was the return of Wharf rats  who had  been penetrated by those  stakeholders regard as Executive Wharf rats at the seaports.

Note that the Concessionaires had initiated  strategic security measures when they took over the  control and management of the terminals from the Nigerian Ports Authority, NPA,  about 13 years ago. The terminal Operators security Department were said to have  been  working closely with  the NPA, security Department to ensure that the hoodlums will not find their way back to the port to broach ‘pilfer Containers or vandalise vehicles.

The disappearance of the Whaf rats from  the port  was said to have given respite  to the importers with their agents as their imported Containers and vehicles were secured . Many believe that the  sacking of the Wharf rats with the combined efforts of the NPA , security and the terminal operators security personnel  may have forced the hoodlums , who were said to have penetrated the ranks of the agents and Dockworkers to find their way back to the terminals at the Lagos seaports in order to carry out  their nefarious activities. From  Port and Cargo , Five Star terminals  at Tin-can Island port,  Port Multi-services terminal  limited, PTML, under the close watch of Florence Dixon, to APM terminal, Apapa, the story is the same: broaching , pilfering of Containers and vandalisation of vehicles. .

The ANLCA, Tin-can Island Chairmam, who is worried over the return of the Criminal elements at the terminals in the Lagos seaports,   has  condemned  it, as he confirmed that the broaching and breaking into Containers to pilfer goods   as well as vandalisation of  imported vehicles have been on the increase in the recent time.

He disclosed  that  the return of ‘wharf rats’ to the ports  is disturbing to agents who are the worst hit, as they would never be paid any Compensation for the stolen items by the Shipping Company , which had offloaded  the Consignment or vehicle at the terminal where the incident  had occurred.

He revealed how   he has  been a victim of the Wharf rats at Tin can Island port  as his Importer’s’ four containerized vehicles of different models: of Land Cruiser Jeeps and Hilux Jeeps, were vandalized. According to him , the matter was reported to the shipping Company and the security Department of the terminal Operator, but that was how he could go. An aggrieved, Oduntan, explained that the incident almost created a frosty  relationship between him and  the importer, who was said to have threatened to take away  all his clearing jobs from him and hand it over to another clearing agency. Close associates said it took the intervention of some well- meaning friends who knows the agent and the importer to resolve the crisis between them and restore their business relationship.

Given an insider information, he disclosed that an agent will  never  know the level of damage to his Client’s Container or vehicle  until he gets  to where the Consignments were offloaded. This may have informed the reason why he has  advised other  agents to  ensure they  participate in the  examination of their  importers’ cargoes with a recording camera support  the work of their android phones to take pictures of the contents of the Container or the vehicle examined. He will also want  the agents to buy a strong padlock that could never be broken into  no matter how hard anyone hit at it to replace the one that would be broken in the course of examining the Container to ascertain its contents as contained in the bill of lading.

He however, blamed the terminal Operators for the return of the Wharf rats to the seaports because of their craze to make profit  instead of implementing projects that would enhance the security of  Containers and  vehicles offloaded in their terminals. Given his understanding of  the control and management of terminals in other parts of the world, particular, in Europe and even South Africa,  he  averred  that“ there is a standard requirement for an investor  to own a terminal, as there is a standard for licensed customs agent to practice at the terminals.

He noted that  if all the required standards have been followed strictly  by the terminal operators and Agents, there would not be any room for  hoodlums to return to the seaport to be broaching , pilfering Containers or have opportunity of vandalizing imported vehicles to remove electronics and other valuable items found in the vehicle.

The ANLCA Tin-can Island helmsman, lamented that  even though the NPA, has subscribed and operates in line with the International Ships and Ports Facility (ISPS) Code, is that  the ports must   be well illuminated to track the movement of illegal persons at the cargo areas at any point in time..

The Maritime Workers’ Union of Nigeria, MWUN, may have  cashed in on the inability of the terminal Operators and NPA, security personnel, to effectively patrol the cargo areas   to devise ways of check mating the activities of the Criminal elements at the ports.

Appealing to the terminal Operators to beef up their security at their respective terminals, Adewale Adeyanju, President, MWUN,  explained that it is the only way to stop the mess at the ports.

The activities of the Wharf rats may have forced some of the terminal operators to install Close Circuit Television , CCTV, in their terminals to monitor the movement of persons. Take for instance, at Ports and Cargo terminal, which was a haven for Wharf rats before now, has turned out to be a no go area for them because of the installed CCTV, which had put every person coming into the port under close scrutiny.

Many believe that there is no avenue for the Wharf rats to have found their way to PTML to wreck havoc on imported vehicles or broach/pilfer Containers without the Collaboration of an insider. This is because of the difficulty of entering the terminal without a digital Identity Card as an gent, Customs or any other  authorized person allowed to enter the terminal.

A security source who spoke to the Magazine disclosed that Wharf rats who may have found their way to steal may have entered with the assistance of an agent and subsequent hid at  a location where it would be difficult to locate them.

Meanwhile, Adeyanju, had threatened to expel any member of the union found wanting of any act of stealing at the ports or aiding any unauthorized person to enter the restricted areas at the port. In a related development, he has warned  the Officials of the Union,to desist from participating in examination of cargoes at the terminals to avoid playing into the hand of the terminal operators if there is any incident of   broaching, pilfering or vandalisation. This is bad news for the MWUN, Officials , who see their involvement in cargoes examination as an Opportunity to get extra income at the port.. “I don’t want the  terminal Operators  or NPA  to put the name of the union in bad light’’, he had warned.

The no nonsense MAWUN, President, was said to have made it clear, to the Union branches , at the ports, that  any Dockworker , Unit or Branch official  who  gets himself involved in stealing or conniving with anyone to broach or pilfer a Container offloaded at  the port will have himself to blame, stressing that the’’ treatment he will get, he will never like it’’.

He has a word of caution  for  importers with their gents and Staff, who have a bill lading for any imported item, including  customs and terminal workers  to stay clear from any conspiracy that may lead to vandalising, broaching or pilfering of containerized items at the terminal.

Recall, that last July, APM terminal, tight security at Apapa , port help, in nipping on the board , a well organised plot to   steal 10 cartons  from a an offloaded Container loaded with hundreds of cartons of tramadol, shipped from the Asian country of India, with an Ambulance vehicle,  that could not be suspected.  Prior, to the interception of the Ambulance bus , loaded with the  10 cartons of the India Pharmaceutical Company manufactured drug,  210, cartons, of the drugs,  with a Duty Paid Value, had earlier developed wing at the terminal, an indication that there must be an insider  working with the port thieves, popular, Wharf rats.

The driver and the vehicle escort, may have confirmed , the  impression of  to security officials at the Apapa port that  that they have insiders who had engaged their services to carry the dangerous drugs out of the terminal  to an undisclosed location . James Iwore, an importer, said the APM tramadol incident was not new. , stressing that it is a regular occurrence with the active participation of Dockworkers, Staff of terminal Operators, Customs officers , Importers with their Agents  who have the bill of lading of the cargo.

Ia related development, the Federal Operations Unit, FOU, Zone A, Operations and Lagos Roving Team, Headed , by  the fearless, Riks  Lura, a Chief Superintendent of Customs, has turned the Command premises into a car mat for display of exotic vehicles.

Investigation by The Value News , shows, that  the border drills, which had forced cross=border vehiculars to put their vehicles on the road as there is no hiding place  any longer for them  to keep smuggled vehicles in order to clone PTML or Tin-can Island documents  as they fall into the waiting hands of  the patrol team.

Some of the vehicles, were said to have been intercepted on the road over alleged non-  payment of duties and transferred to the Command premises. Afirst time vistor to the Command premises, would , be surprised at the number of exotic vehicles, including  a bullet proof as there no space to keep other vehicles which had continued to be  transferred to the Command. Amember of the border drill who spoke to The Magazine  said , Mohammed Aliyu, the Area Comptroller, is free to go to sleep, with Riks, in-charge of the Command Operations and Lagos Roving team.

While the terminal Operators are geeting worried over the activities of Executive Wharf rats at the ports, Riks and his boys, appear to have beamed their searchlight on containers released from the terminals by the Customs  releasing officers as the team have continued to intercept suspected  Containers on the road which are transferred to the Command for examination and proper valuation.

Insiders told The Magazine that the team, has recovered millions of naira, lost revenue for the government in the last three months.