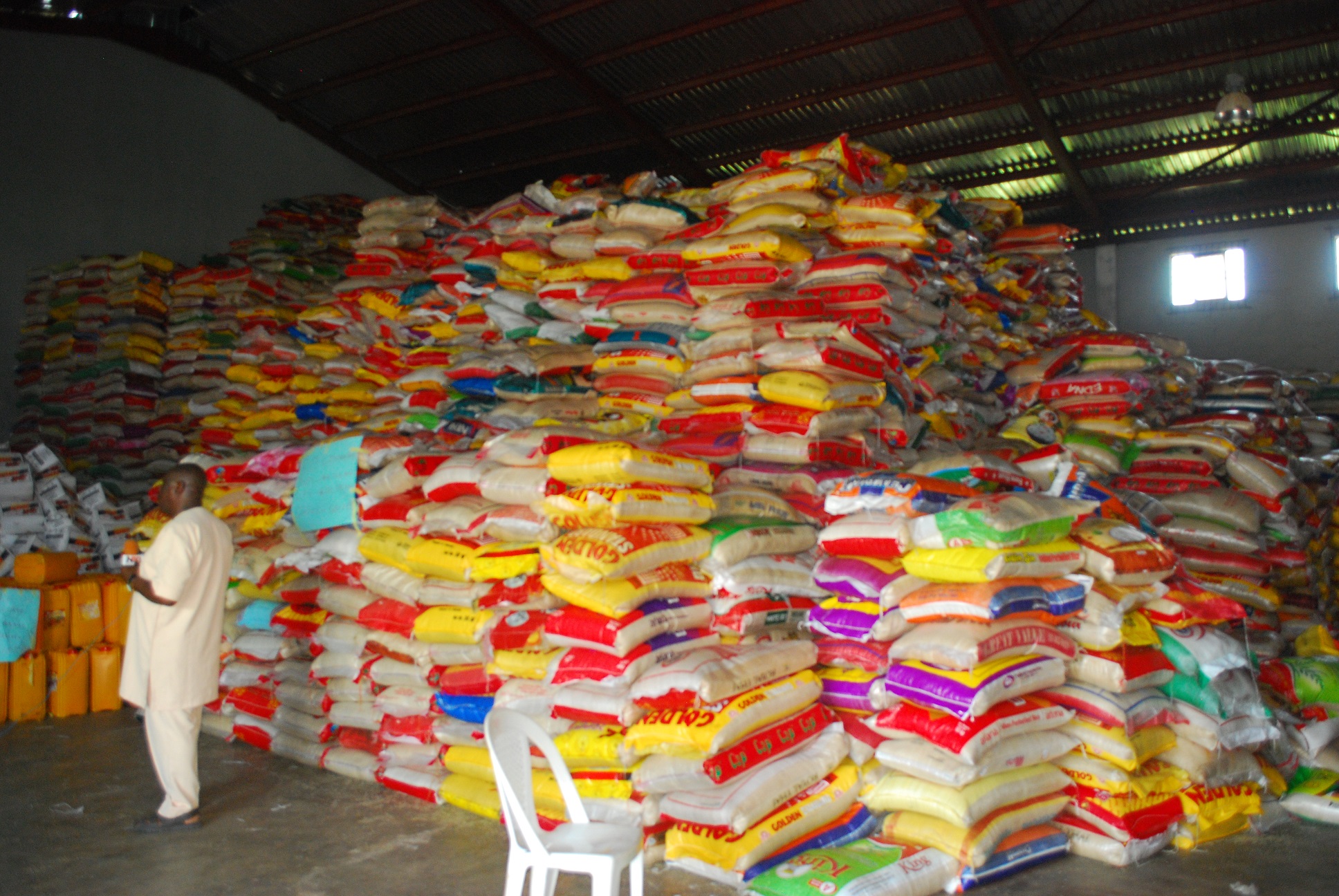 Those who had planned to buy foreign parboiled rice and other perishable items from Customs warehouses  across the country  based on the earlier promise  made by Hameed Ali, a retired Colonel and Comptroller General, Nigerian Customs Service, NCS, when  visited the federal Operations  Unit, FOU, Zone A, Ikeja, would be disappointed.

The Customs Comptroller General had said during a visit to FOU, Zone A, Command, to see for himself the tramadol seizures made by the Command that Customs will auction all the seized perishable items  which are scattered all over Customs warehouses across the country as the governors of Adamawa, Borno and Yobe states , in the north east and Edo state ,in south-south Nigeria, have not shown enough enthusiasm to take delivery of their allocations to the IDP Camps in their respective states.

Recall, that the NCS, had since 2016 and last May, delivered 424,391 50Kg bags of the condemned seized foreign rice by the Court to the victims of the unfortunate Boko Haram insurgency in the north east and the IDP  Camp in Edo state worth about N4.047 billion.

Given an insider information, Joseph Attah,  a Deputy Comptroller and the NCS, National Public Relations Officer, disclosed that Ali, the Customs boss had sought and obtained the Presidential approval to extend the condemned perishable items by the Court of Law to registered Orphanages and other IDP  Camps across the country an indication that it may no longer be sold to the general public.

Attah confirmed that ”with the relative peace  in the north east geo-political region, many of the IDPs in the Camps  are now returning to their ancestral homes and engaging in farming, noting that the demands for these perishable items by the IDP Camps will continue to be on the decline.

The Customs Spokesman disclosed that  while the needs of the IDP Camps would reduce,  the  continuous seizures by Customs anti-smuggling  operatives ” demand imperative of extended distribution”.  He confirmed  that the Committee set up by the Customs Comptroller General are already compiling the list of the IDPs and registered Orphanages with a view to ”kick-starting the nation-wide distribution as soon as possible”.

Attah was right when he said the Customs anti-smuggling operatives are still making seizures, which are dumped in the warehouses , thus creating space constraints to keep additional seized perishable goods. This is evident going by the seizures at FOU, Zone A and Seme  Command respectively, where the anti-smuggling operatives were said to have taken the war against smugglers to their den to forestall them from continuing with the illegal business.

He however lamented that despite moves to curtail the activities of the dare-devil smugglers, ”many still see smuggling as a  business and not a crime”. An aggrieved Attah was said to have told those that care to listen that  ”smuggling was not just a crime but the mother of all crimes and criminalities” as violent crimes are perpetrated with dangerous weapons such as arms ,drugs  smuggled into the country.

Only recently, the service intercepted 59 ”40ft” Containers of tramadol drugs  in three different seaports across the country. They are Apapa, Tin -can and Onne  seaports. Given a break down, the Customs spokesman said  40 of the tramadol drugs Containers were intercepted at Appa port, Tin-can, 10 and nine at Onne seaports.  Riks Lura and his men in the FOU , Zone A, operations and lagos roving team   who masterminded the seizure of 40 Containers of  ”40ft” each of tramadol drugs at Apapa  were said to have busted a N150 million bribe at the port meant to influence the releasing officers and the FOU team. Many believe that that if these drugs had entered the Nigerian market and smugglers have access to it as they like, violent crime along the border with other neighbouring countries in the West African sub-region would be on the increase.

Regrettably, the Customs Spokesman, stressed that fighting smugglers in different parts of the country have not  been an easy task because of  the country’s porous borders. Take for instance, in Adamawa state alone, David Paradang, a former Comptroller General of Nigerian Immigration Service, NIS, confirmed that there are about 83 illegal routes and about 84 in Ogun state through which smugglers could enter the country from Cameroun and Republic of Benin  with their smuggled goods.

This is made worse by the attitude  of some of the border dwellers and their willingness  to help the smugglers mob Customs operative.  In addition ”lack  of proper implementation of the Economic Community of West  African States, ECOWAS, protocol on transit with the neighbouring countries and use of motor cycles and animals to smuggle through difficult terrains may not have made the job of the Customs anti-smuggling operatives easy.

Only recntly, Riks and his men in the FOU, Zone A, Operations and Lagos Roving team made seizures of some motorcycles loaded with rice on the passenger Seat in one of their anti-smuggling operations in Ogun state, which was displayed in the Command last week. Indeed, the seizure of motor cycles used in smuggling foreign rice from Republic of Benin into Nigeria is a common sight in Seme and Ogun Commands because of the difficult terrain of the areas.

Perhaps, one area that may gladden Ali, the Customs  boss  since assumption of office about three years ago was ensuring that the upward swing in the revenue  generation of the Service was maintained. An elated Attah disclosed that between January and November, 2018, the Service has generated about N1.1 trillion as against N1.037 that was generated and paid into the Federation Account in 2017.

He noted that the upward swing in the yearly  revenue generation of the Service was an indication that the ongoing reforms of the service has impacted positively  on officers productivity as they placed ‘ the ”country’s interest  above their personal interest”.