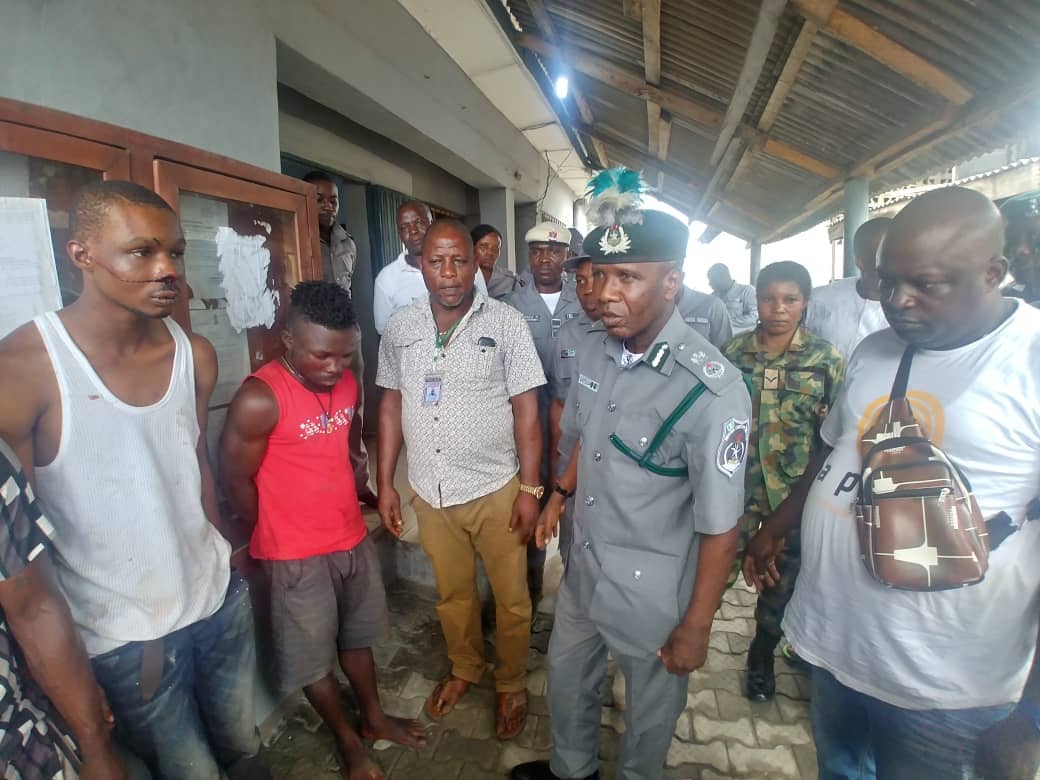 This is because of the tight security mounted along the Lagos -Badagry road by  officers and men of Seme Command. headquarter Strike Force, HSF, Federal Operations Unit, FOU, Zone A, personnel and the Police. Recall that Mohammed Abubakar Adamu, acting Inspector General of Police, IGP, recently reorganised the operations of the Federal Anti-Robbery Squad, FARS, following  alleged unethical conduct by members. The essense of the reorgansation exercise was to make the Special Anti-Robbery SQuad to go after the robbers in their hideout and smoke them  out.

At the Seme-Krake land Border area, the Seme Command patrol teams appears to have taken the upper hand to  frustrate the  activities cross Border Criminals including dangerous drug smugglers and now cross Border   robbers. Last Wednesdy, January 30, 2019, the eagle eye  Seme Command officers at Gbaji Checkpoint were said to have beaten the FOU, Zone A and HSR personnel at the checkpoint including  the police men along the road, to arrest four suspected  Cross Border armed robbers on top of the Gbaji  bridge  of the Lagos-Abidjan corridor.

The suspects were said to have beaten the Customs personnel at  the various checkpoints  including the numerous police checkpoints along the Lagos – Seme  International route but were unlucky to fall into the waiting hand of Seme Command Gbaji Checkpoint officers.

The Value News learnt that the Cross Border robbers had tried to deceive the officers that they were genuine travellers from the one of the West Coast countries but that could not fly as the officers ordered them to disembark from the vehicle.  they were found to be wearing charms and armulets to influence security operatives including Customs personnel to pass through the road without being searched. The The guns discovered in their bag forced the Customs personnel that had stopped them for  normal searching to be furious  and to  order them back to Seme for questioning. It was that the game was up and their charm which they have been over the years cannot save them

They may have been found them to be cross Border armed robbers when they could not respond to some of the questions posed to them. An insider told the Value News  that going by the information volunteered by the suspects they have be operating along the Lagos-Abidjan corridor in their robbery operations for years.

An elated Mohammed Uba Abubakar, Comptroler, Seme Command , who has made Seme -Krake Border to be too hot for smugglers had vowed to stop cross Border criminals. The  Customs Comptroller was said to have handed over the four suspects to  FARS  for further investigation. The arrest of the four suspects  who had already beaten the police to it on the road before they  were caught  by Seme Command  checkpoint officers speaks volume. This is where Edgal Imohimi, Commissioner of police , Lagos  state,   may have to deploy more FARS personnel to the Lagos- Seme international road to compliment the activities of Customs personnel in smoking out the criminals plying the road as if they are genuine travellers.

It could not be ascertained whether the suspects were still in Customs custody or had been handed over to the police in the spirit of inter-agency relationship.