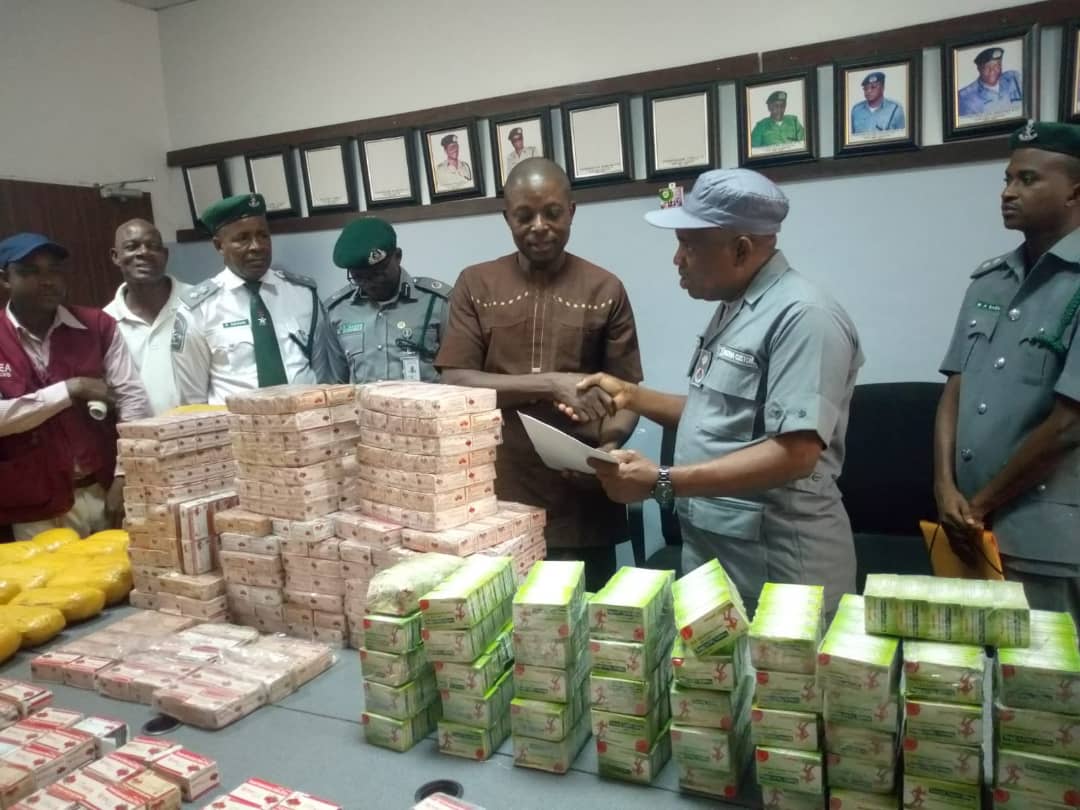 Until the close of work last Thursday, officials of the Nigerian Drug Law Enforcement Agency, NDLEA, were not sure when Muhammed Uba Garba, Comptroller Seme Command  will transfer the alleged tramadol drugs and Sativa Cannabis intercepted from smugglers .

The Value News learnt that  Garba, the Seme Command  Customs boss has prepared the mind of the officials of the Agency  to be ready to take delivery of the  hard drugs in the spirit of interagency relationship.  it was gathered that officials of the Department of State Security , DSS, were also informed about the intercepted drugs.

It was not surprising why the DSS  officials were said to have followed it up until the day of transfer to the Agency. A Customs source informed The Value News that the transfer process may have been delayed because of the Customs Comptroller official engagement at Owode, another Border Community within the Jurisdiction of the Command. he was said to have mobilised his management team and temporarily relocated  the  Operational base to Owode outstation to rub minds with the people  on the Economic Community of West African States, ECOWAS,  regional integration  policy and the need to engage in legitimate trade rather smuggling.

The fallout of the joint meeting on Thursday, January 24, 2019, was a promise by the people to support the Command  anti-smuggling war  to nip the activities of smugglers  on the bud .  Armed with the promise, Garba, and his management team were said to have left Owode Border Community fulfilled that  smugglers are in trouble.

Note that Owode Border Community has been known for its notoriety in smuggling of foreign parboiled rice, vehicles  and prohibited Pharmaceutical drugs  into the country.  Aware that it cannot keep the drugs in its custody for too long without transferring it to the relevant agency, the Customs Comptroller , was said to have directed Rashid Adahunsi, a Deputy Comptroller  in-charge of Enforce to arrange the transfer of the intercepted drugs to NDLEA . Adahunsi was said to  have contacted one Udotong Essien, the Area Commander of the Agency at Badagry to be  prepared to take delivery of the intercepted tramdol and narcotic drugs.

On Friday, January 25, 2019, he   was said to have represented the Customs Area Comptroller, to perform the formal transfer of the intercepted drugs and narcotics to the agency.  Grba, the Seme Customs boss, who could not hide his feelings  condemned the smuggling of hard drugs into the country, noting that such drugs are injurious to the body as youths  are easily influenced by it ,forcing them to go into crime.

Many believe that the Customs Comptroller have an eagle for drugs that no matter the tricks employed by  importers to engage the services of smugglers to bring the hard drugs into the country through unapproved they would always be caught. It was therefore not surprising who attempted to smuggle prohibited tramadol and narcotics into the country lost the items to Customs.

Eyewitness account confirmed that 67 rolls X 119 packsX10 packs, 9 packs of  225 mg each of tramadol, 56 rolls X5 packs of 200 mg each of tramadol and  43 parcels  of Sativa Cannabis, popular Indian Hemp were said to have been transferred to the agency. In appreciation of the support of the Seme Customs Command , Essien, the NDLEA, Badagry Area Commander, was said to have thanked Garba, the Seme Customs Comptroller and his men for their anti-smuggling efforts which is yielding results . The NDLEA Commander, promised to mobilise his men to investigate the drug case thoroughly.

The seizure of the tramadol drugs and narcotics has called for an urgent meeting between him and Charles Inousa Saca Boco, Director General, Republic of Benin Customs Administration to take a closer look at the transit cargoes  imported through the Cotonou port as most of those goods are prohibited from coming  into the Nigeria market because  of the country’s fiscal policy. Take for instance , tramadol of higher strength, foreign rice, processed vegetable oil , poultry products and fairly used clothing  which could be imported into their country but are not allowed in Nigeria.

Given that tramadol and other prohibited drugs are not allowed into the Nigeria market, importers of such items, according sources, open their Containers in designated warehouses in Cotonou , and smuggled it through unapproved routes into the country.

Note that tramadol drugs may not really be prohibited in every sense of it but there is a particular strength or milligram of it that are said to have been approved by the government. But importers may not want to go for this lesser strength Tramadol but would prefer the hard drugs which the government had banned because of its harmful effects.

The tramadol importers may have discovered that the seaports have become a no go area because of the vigilance of the Federal Operations Unit , FOU, officials in Zone A, Ikeja and Zone C, Owerri, south east as well as the Headquarters Strike Force personnel that they resorted to try their luck through the use of illegal routes in the country’s Border Communities.

While Seme Command patrol team intercepted the tramadol drugs which had been handed over to NDLEA, the importer and another set of smugglers sponsored to go through Niger state were said to have fallen into the waiting hands of Abdullahi Kirawa, a Deputy Comptroller and Coordinator of the Headquarter’s Strike Force officials in the state. The Kirawa boys  were said to have impounded tramadol  and penkidol worth N44million. The drugs, accordingto the Strike Force boss was intercepted along the Suleja-Minna road.

Given further information , the Headquarters Strike Force ” but for the eagle  eye  of men and officers in  his team”, the items would have made their way into the Nigeria market”. An angry Kira said drug poses dangers to the market.  The good news was that one suspected  was arrested in connection with the intercepted tramadol. The Headquarters Strike Force Coordinator disclosed that they have intensified investigation to unravel the importer.