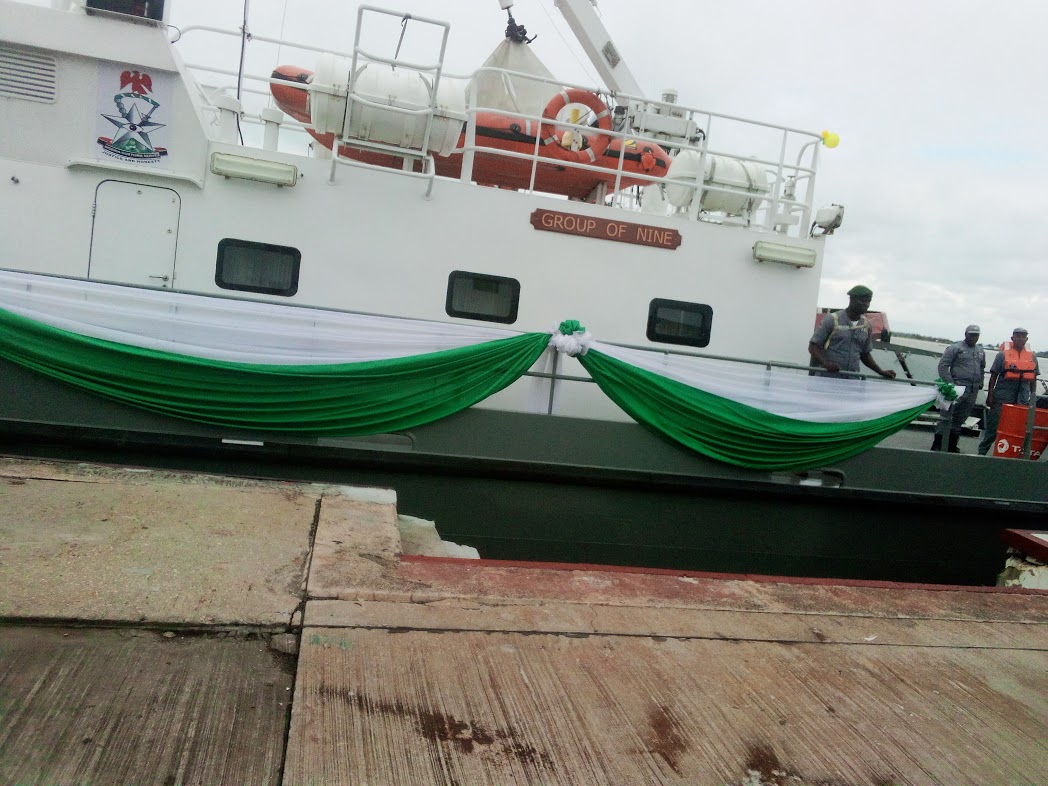 Babagana Munguno, a retired Army Major General and National Security Adviser, NSA, who  incidentally  is Coordinating the current Operation Swift Response, or Joint Border s drills  across the country  appears to have dampened the enthusiasm of Nigerians who had expected him to make a policy Statement  on Thursday, September 12, 2019 during the Commissioning of the Customs  two  specialized vessels for anti-smugling Operations on the  High  sea and the Creeks.

At the Commissioning  of the $500 million  or about N180 billion, two anti-smuggling   Customs vessels: Customs Pride and Group of Nine, which was  said to have been  procured by Abdullahi  Dikko, a former Comptroller General of the Nigerian Customs Service, NCS, in 2014,   Munguno had  declared ‘’there is no going back on the border closure  with  the  neighbouring  Republic of Benin and Niger. The countries share boundaries with Nigeria in the north west, north central, southwest and south-south geo-political regions till the  countries bow to government demand to stop  smugglers from using their countries as base to turn Nigeria  into  a dumping ground for prohibited goods, particular , foreign parboiled rice from the Asian country of Thailand.

The NSA  was worried  that ‘’ harmful products, mall and light arms including foreign rice were smuggled into the country through unapproved routes  from the north and  southern part of the country.

The Commissioning ceremony which had attracted the service Chiefs and  other  top government functionaries including the Director General the National Agency For Food and Drug Administration Commission, NAFDAC, who was said to have sent a Representative was a moment of joy  for Marine customs officers. This is because of the several promises that had been made to them since 2015,  about the Commissioning of the vessels which never materialised.

Dikko , the former Comptroller general may have lost the opportunity of taking the credit of being  the one  that  Commissioned the multi-millions dollar vessels because of his inability to conclude the deal  with the South Africa and Turkey ship building firms to mount the guns and other necessary security gadgets on the vessels.

Indeed, past and present Area Comptrollers of Western and Eastern Marine Commands, the only two Amphibious Commands of the service, before the unbundling this2019,  may have known that it was the  major problem that had  delayed the Commissioning and deployment of the vessels to the High sea for anti-smuggling Operations.

The fallout was that the vessels were abandoned at the Marina water front since  2015 thus gulping N5 billion annually  as  it needs to run the engines as well as the generating sets  and other Communication equipment fitted into the vessels.

Aware of the problem delaying the deployment of the vessels, which could move  both on the High sea and shallow waters, for ant-smuggling operations,  Ali, who had succeeded Dikko, in 2015, had engaged the services of the Nigerian Navy to add the necessary security gadgets.

Based on the deal, the vessels, which were abandoned at the Marina water front, for about two years were taken  to the Navy Dockyard Nigeria limited , for dry docking. The dry docking was said to have facilitated the fitting of the necessary security gadgets into the vessels including the guns.

The Customs Comptroller General may have been encouraged to repair the abandoned vessels at the Marina Water front because of security reports that  many of the smugglers  have turned to the waters to carry out their nefarious activities because  of the stiff resistance  they are getting from Customs anti-smuggling officers n land.

From Seme Command, Idiroko, Oyo-Osun to Sokoto/Zamfara/ Kebbi Commands, the story is the same: stiff resistance to smugglers. Their case may have been made worse by the Federal Operations Unit, FOUs, and the Comptroller General of Customs, CGC, Strike Force, across the country which have  initiated tougher measures to deal with them on Land.

Note that the large turnout of Customs and other security agencies personnel particular the Navy including the leadership of the Manufacturers Association of Nigeria, MAN, led by its President, Mansur Ahmed, and who incidentally is a member of the Customs Board at the Commissioning last Thursday speaks volume.

Giving a special message from the Katsina state born Nigerian President, who is very appreciative of  Ali’s efforts in the last four  years in repositioning  the service on the path of sustainable improved annual revenue generation, which Kaycee Ekekezie, an Assistant Comptroller General, in-charge of Customs Zone A, said had  hit the trillion naira mark.

Describing the Customs Comptroller General as a “silent achiever’’, the President had said that  the ‘’sacrifices and the revolutionary changes   brought about by the Comptroller General into the Service  has led to efficiency’’ in Customs  Operations’’ in the last four years.

He may have gladdened  the heart of the  officers who had gathered at the Naval Dockyard, to witness the Commissioning  of the two anti-smuggling vessels when he expressed  the President’s determination  to give all the necessary support to Customs to continue in its giant stride in  the areas of  anti-smuggling operations and evenue generation.

Congratulating the Customs Comptroller General men for the spectacular achievement, of procuring  the two Commissioned  vessels, the NSA,  declared that the’’ first step  in solving the menace of smuggling activities  in the country’s waters , by ‘’bringing  all the neighbouring  countries  that have not been Cooperating  with the country in the anti-smuggling war  has been found’’ . He stopped short at saying that the “water ways  smugglers are in trouble”.

He is right.  President Issoufou Mohammad, of Niger, one of the neighboring countries in the northern frontier may have understood the language of the Border lockdown on his people that he has banned foreign rice re- exportation  from Republic  of Benin into his  country. Issoufou, may have done so in order  to contain the activities of the smugglers using  his country as a base to smuggle foreign parboiled  rice and other banned items by the Nigerian government  into the country .

Moreso, he did not want to play into Buhari, the Nigerian President’s hands,  who believes that smugglers are taking advantage of the country’s porous borders to smuggle  rice into the country. This is evident going by a circular that was said to have been  sent to all Custom formations in Niger on Thursday, September 5, 2019,signed by Oumarou Amadou, the country’s Director General of Customs in the ministry of Finance .

The purported circular which was said to have been written  at the instance of the Issofou, had made it  it clear to those that cares to listen  that the  re-exportation of foreign rice from Republic of Benin into Niger has been banned.  Investigations by The value News shows that some of the these trucks laden rice from Benin earmarked for the Niger market  develop wings on the way as it ended up  in Kano or Jigawa state markets. It was not surprising why The Niger Customs Director General had warned the  agencies to ensure they ‘’comply  strictly with the Presidential directive  or face severe  sanctions’’.

This is a big blow to Patrick Talon, the Benin President , who may still be dragging his feet to support the Nigerian government policy measures to contain the activities of the Cross-border smugglers  because of the transit duties collected from the land locked countries  transit cargo importers . Recall the NSA , had said that  the cross-border smugglers smuggle into the country “harmful products and other prohibited items  such as rice and vehicles  from neighbouring countries  through unapproved routes ”into Nigeria because of the government support.

An elated Ali, the Customs Comptroller General who could not hide his feelings was said to   have  assured  the  President, “ With the Commissioned vessels  “smugglers  will no longer take advantage  of the NCS vulnerability on water to smuggle Contrabands into the country”. He admitted that the service has been weak  on the water arising  from the lack of seagoing  vessels  to effectively checkmate  the smugglers  on the high sea, over the years.

It was not surprising  why one of the two sea going vessels, that was Commissioned by the NSA,  was named after the “Group of nine’’, as the officers were called in security circles. Ali is optimistic that with the Commissioning of the vessels,  the service  will effectively deliver on its mandate  to the nation to fight smugglers on the nation’s water ways to a standstill.

He further opined  that “it will boost  the ongoing joint  security Ex-Swift Response  on water”. Recall that the major problem of the two Amphibious Customs Commands,Eastern and Western Marine over the years had been lack of sea going vessels. The situation was so bad that the Nigerian Navy from time to time  had come to the assistance of the Customs Marine officers  when faced with smugglers on the High sea.

A,t the Western Marine Command, premises, at Apapa,  are littered with broken down Crafts on the waterfront. This may have informed why BN.Binga, the Area Comptroller, could not hide his joy that at long last the Command now has a seagoing  vessel to give smugglers a run for their money on the High ea.

Given the Presidential mandate  to Ali, to restructure , reform and Improve Customs revenue generation,which Joseph Attah, a Deputy Comptroller and the Customs Spokesperson described as the “ the” big three mandate the two Marine Commands based in Port Harcourt and Apapa, had been  unbundled  into four:Western, Eastern, North Western Marine  and North Eastern Marine Commands. Ali,  believes that with the unbundling of the Marine Commands, “smugglers would no longer operate on land , Air or the sea’’.

He may have read the riot to the Customs Comptrollers to ensure regular maintenance of the vessels  in order to remain sea worthy.’’You will be held responsible if any of  the Crafts broke down,and could  no longer be deployed into the High seas or shallow waters for anti-smuggling Operations.

This is bad news for the Comptrollers of the Marine  Commands  who had expected the Customs Headquarters to still  shoulder the responsibility  of regular maintenance of the vessels  because of paucity of  funds to handle such capital  intensive projects.