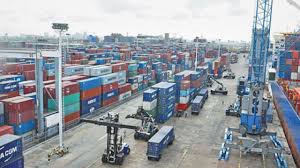 More facts have emerged why the   Tin-can Island Command , under  the close watch  of Mohammed  Abdullahi Musa, the Area Comptroller, collected  about   179.3 billion on imports and exports  including levies and fees ,   between January and July 10, 2019.

This is because  the Command Compliance Unit, Headed by Mahmood Ibrahim, an Assistance Comptroller,  and his officers  who are daily looking  into the import documents  from clearing  agents that had to pass through the Compliance office and  are daily discovering cases of under payment.Ibrahim and his officers were  said to have recovered billions of naira for the Command in the last six months  and ten days into the month month of July.

The Value  News learnt  that the Customs  Assistant Comptroller, regarded in Customs Circles, as a revenue wizard, is daily working on his Comptrollers  to know the exact value of   goods imported into the country through  the Tincan Island port,  which had already been valued by the officers of the Valuation Seat but found to have been undervalued.  this has helped him in recommending the appropriate Demand DN, to the Area  his approval for the Compliant importers whose Consignments undervalued.

It was learned that within the six months under review, the Ibrahim led  Compliance Unit had recovered billions of naira for the Command which could have gone into private pockets. It was gathered that there have been cases where most of the importers with their agents whose dirty deals at the port in connivance with their Customs Collaborators at the port had been uncovered who could not pay the DN, slammed on them but had preferred to forfeit the items to the government.

Insiders informed the Magazine  what  that  may have  boosted the half year revenue generation  of the Command  also depends   on the type of Consignment imported through the port and the rate of duties. Note that the 15 -member countries of  Economic Community  of  the Economic Community  of West African States, ECOWAS, had adopted a Common External Tariff, CET, which could be domesticated by member countries  to suit their economic and fiscal policies.

The current  CET of the sub-region,  according to Customs sources   which kick-started in 2015 will expire this  2019, to give way for release of another CET document.   Recall that  in 2026 alone, President Muhammadu  Buhari  had given approval  for  the reduction of the  duty  on 26 items but the tariffs  other  144 items had remained unchanged.  One of such high yielding item which duty  was  reviewed upwards  was foreign rice. Another was Automobiles.  It was not surprising  why the combination of the revenue  generated through the  issuance  of  DN  to non Compliant Importers and  the rates of duty  on  type of Consignment  imported  through the seaport had  repeatedly  shored up the revenue of the Command, on a monthly basis.

But Uche Ejesieme, a Deputy Superintendent of Customs and the Command Image maker  was said to have attributed  the phenomenal  increase in the revenue generation of the Command  between January and JULY 10, 2019,  to the ”renewed enthusiasm  and development  of  Standard Operational  Procedures, SOP, for operational efficiency”.

Ejesieme who could not hide his feelings  noted that the Command under  Musa,  had witnessed  a major  paradidigm  in its  functions  which had provided  the needed impetus  for the” smooth ”implementation of  the Presidential  directive  on the ease of doing business at the nation’s seaports”.

Musa, the Area Comptroller ,   said  the Command  has gone  beyond ”revenue  generation to creating the enabling environment  for legitimate business to thrive  with the Presidential mandate”. This may have informed the reason why he described  the  port as  a ”hub  and most friendly  with remarkable facilities  in the  West African sub-region.

Many believe that  the revenue generation of the Command in the second half of the year would be much  higher  than  the amount realised between January to June, because of the Central Bank of Nigerian , CBN, policy which  had had fixed the exchange rate  of  all imported goods  into the country  at  N326.00 To a dollar.  This translates   to  N326.00 to the dollar exchange rate in the  cost of  clearing such Consignmenst.

While  Muhammed Abba-Kura, Comptroller, Apapa Command,  could give kudos for the officers of the  Command export Seat for handling  a total of 95,229.15 metric tons  of  exported mostly Agricultural products, to different parts of Europe, United States, US,  and the Asian country of China and India,  at a Free On Board , FOB, value of, N46.613.75 million or N 14.24 billion, the situation is different  from  the Tin Can Island Command which handled more export cargoes.

Note that   there have complaints  of ”no work by  officers attached to the Command Export Set . But   going by the report released  from the Command, the total cargo  handled f by the export Seat  within the period u nder review was much higher than  that of Apapa Command.  Musa, the Command, Area Comptroller disclosed  that the  export Seat handled a total of  150.930.7  metric tons,  of exportable products  with FOB, value of about N70 billion as against N 63.11 billion, achieved in 2018.

There is no gain saying he fact  that exporters may have found  the Tin-can Island port more attractive to do their business because of the structures found  on ground  to enhance trade facilitation in line with the government policy.

Perhaps, to  further enhance the Command revenue generation through exports, it  has begun a sensitisation   Campaign to create more awareness   that would  encourage  more exporters to venture into the business and use of the Tincan Island Port.

The Tin-can  Island Customs Comptroller may have taken a cue from Mohammed  Abba- his counterpart at Apapa expose the number of and detained by the Command.

Given an insider information, he said the  Command Enforcement Unit, Headed by Dera  Nnadi, a Deputy Comptroller, recorded  a seizure of  5X”40”  and 4 X ”20”,Containers  carrying different imported goods , which maritime Observers are mostly from   China and India.

The Tincan Island, Customs  boss,  revealed that the items mostly  found in the Containers were  second hand  tyres,  and rims,  50Kg bags of foreign parboiled rice, cartons of tramadol drug and other prohibited Pharmaceutical drugs with  a Duty Paid Value of about  N 159.22 billion. The drugs were linked to India Pharmaceutical Companies.

It is instructive to not that  worried by the problems of Congestion at the port, Musa and his management team, were said to  have  worked out  an actionable modalities  for  the purpose  of transferring  Containerised cargoes  from the port to the off dock terminals using barges.

The Customs Comptroller is optimistic  that   i the policy would go a long way to speed  up the cargo  delivery”  at the port,  given the  fact that  ”cargo throughput  is increasing  by the day   as road infrastructure had been overstretched.