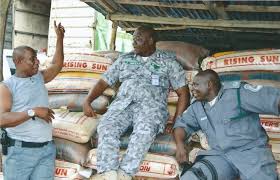 For much of last week and now Economic and social activities at the Seme-Krake Joint Border between Nigerian and Republic of Benin had come to a  halt This is because f the Border drills jointly carried out by the Nigerian Customs Service, NCS, under the leadership of Hameed Ali,   a retired Army Colonel, in Collaboration with  Mohammad Babadende led  Nigerian Immigration Service, NIS, and other security and intelligence agencies including the Nigerian Police Force, NPF.

Described as the busiest Border in the African Continent  because  of the consistent  movement of goods and services across the Border, the situation appear  to have hanged in the last one week  with no sign of improvement. The Value news visit to the Border Community  was very  revealing : the situation  was very worrisome. At the entry  and exit point of the One Stop Joint Border are hundreds of  truck laden goods,  tankers loaded  with Semi processed vegetable oil  and Heavy duty vehicles awaiting to be given the green light by the members of the Ex-Swift Response which is not quick to come.

The situation is so bad as the temporary Park provided by the Seme Customs Authorities  for transit cargoes  has become a shadow of itself  as  scores of casual workers at the park were found  working around for lack of job to do.

Many Agents were found to have abandoned their trucks at the examination bay at the Joint Border. There are  indications that the Seme Command  may have  lost millions of naira  as  Agents have refused to come forward to process their  clients  transit import documents  in order to  take delivery of the cargoes for fear of being harassed on the road by the Joint Border  security Operatives who are  strategically positioned   between the Lagos –Seme road.

Efforts to speak to Abubakar Amajam,  an Assistant Comptroller General  General, ACG, in –charge of the south-west Border drill and Abdullahi Kirawa, a Deputy Comptroller and Head of Operations  on the alleged  delay in allowing transit trucks from Benin terminal, Cotonou, and Bollere port in Republic of Benin to enter the country for the importers  with their Clearing Agents to take  delivery  proved abortive.

The Magazine  took time  out in an undercover investigation  to observe  what is happening at the  pedestrian  way provided for free movement of  persons to facilitate trade  between  two countries at the Joint Border but found no trace of Cross –Border movement of goods and services since the Border drill started  penultimate  Tuesday evening.

Chukwukadibia Okoro, a cross border  business man said the consequences of the Border drill  which  had entered the second week  is  very worrisome as dealers on perishable goods like pineapple  are no longer finding  easy to supply their Nigerian Customs who had placed order for it.

An angry  Abdul Musa, a resident of Krake Community had  cried out: what  do we do now.  He noted as a trader, he would have  known  how his money  on other trade goods within the Border Community  if the Nigerian government had given the time lag for the border drill exercise to elapse.

Chukwukadibia Okoro, another resident  of the krake Community Community  on the Beninoise side of the Joint Border, who spoke to The  Magazine  lamented that  ‘’ it is now very difficult to feed at home’’ . Okoro, who had been living  at Krake for the past ten years dealing  on  perishable goods like Pineapple and fresh tomatoes  stopped short at saying that there is hunger in Benin Republic  as petty traders, taxi drivers, market women were all affected.

One of the market women who could not hide her feelings   said the atmosphere in Seme –Krake Joint Border was not different from what is happening  in the Border Communities in in Kano and Jigawa states with Nigeria, where the Border drill Operatives had cut off the sources traded goods supplies to  the land locked country from Nigeria.

The Beninoise  female trader at the Seme  open market   challenged The Value News  to enter the Border Community  in order to actually find out  what is happening:. The Situation is bad. The  beninoise women  at the Border  have every reason to worry  as many of them survive in carrying load for travellers across the Border for a fee.

Some of them also engage in   crossing the Border to buy  foreign par boiled rice for Nigerians for home use. These sources of income had be lost , forcing many of them to be roaming aimlessly on the Busy Seme road. Perhaps, what the Youths of the Border Communities  appear to have lost most is  smuggling of foreign  rice and vegetable oil across the Border , particular, in Ogun state, which  has  several Border Communities with  Benin.

According to the NIS, there are over 80  unapproved routes alone in the state.  Michael Agbara, Comptroller Idiroko Command,  who has been working round the clock to contain the activities of the smugglers may have had a breather with the  coming of the Joint Security Operatives, who has a Presidential mandate to protect Nigerian’s land and maritime Borders.

An elated Joseph Attah, a Deputy Comptroller and Cutoms Spokesperson, said the   the ‘’resolve by Nigerian security agencies  to secure the country’s territorial waters  , particular,  the maritime Borders  against trans- Border  Crimes has started yielding result’’. Attah alluded that that  that the exercise which commenced  in four sectors comprising of the south west, south-south, north west and north east geo-political regions  have  witnessed a number of seizures and arrests.

Unconfirmed report said  most of the seizures were made in the  north west and Ogun state, where smuggling activities , particular, smuggling of rice, were said to have reduced considerably. Amajam, the ACG, over- seeing the Ex-Swift Response in the south west was said to have told those that cares to listen  smuggling activities in the state, which is notorious for rice had  dropped to about 50 percent. But Saki and Iseyi axis in Oyo and Osun states, a source told The Magazine a trouble area.

It is not surprising why the Federal Operations Unit, FOU Zone A, under Comptroller  Mohammed Aliyu,  set up Strike Force, Headed by One Ahmed, a Superintend of Customs  and his boys  are giving the rice smugglers in the area  a run  for their money by engaging the services of informants to track them.

It is not surprising why the Command like Seme Command under, Muhammed Uba Garba, the Area Comptroller, are still making rice and vegetable oil  seizures despite the Border drill  joint carried out by  all the security agencies including the Department of Security, DSS, and Directorate of Military Intelligence, DMI.