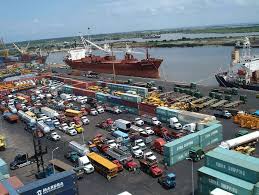 More facts have emerged why importers with their  agents are scared  about Customs  Teams  on the road. This is  because  they are no longer getting the free money they are used to with the support of their Customs Collaborators at the seaports because of multiple checkpoint on the road mounted by the various Customs teams to  screen the cargoes released from the ports.

Take for instance, Tincan Island port , which used to be a centre of bad jobs through what is described in Customs quarters as , Machine Outside, MO, documents, to take delivery of  goods at which had been stopped. Baba Musa Abdullahi, the Tincan Island, Area Comptroller, may have dealt a  decisive blow to the fraudulent agents when he  dismantled  their meeting centre at the Command and turned into a Restaurant where officers and visitors could have their launch.

The fraudulent agents may have known that they are in for tough times  as they could no longer cluster in one location to plot on how to take  delivery of their cargo from the port without paying the  appropriate duties.

The Tincan Island Customs Command boss , who was out to change the way of doing business  because of the general impression that over 30 percent  of the importers with their agents operating at the port  were not trade compliant. He  was said to have brought in Muktar Ibrahim, an Assistant Comptroller, regarded in Customs circles, as a revenue mobiliser and anti-smuggling wizard  , to head the Command Compliant Unit, to stop the raketeering.

Abdullahi  reportedly said that , ”if   importers and exporters are compliant to the country trade rules , they  won’t have  problems at  the seaports or when they encounter  Federal  Operations Unit, FOU,  or Headquarters’ Strike Force personnel at  the checkpoint.

Note that Hameed Ali, a retired Army Colonel and Comptroller General. Nigerian Customs Service, NCS,  had repeatedly said it to the hearing of people that  99 percent of the nation’s importees  , both land seaports, are non   trade Compliant  with Customs duties and charges.

According to him,  the country cannot make progress  in a situation where importers and exporters  are not ready to comply   with the law of the land  to do their transactions  but always thinking on how to circumvent  the law to shortchange the government.

Recall that Abdullahi had repeated complained that  that traders and importers who are non trade compliant   want to enjoy  the full benefits of trade facilitation ”.  The NCS,   operate a  risk based management systems , which were supposed to run on their own  without any interruption  from  theofficers.

The Customs personnel may have interfered with the running of the systems on the orders of the Custms Comptroller General,   because importers with their agents   are not trade compliant .

A senior Customs officer who spoke to The Value News      disclosed  that why most importers with their agents  may be having problem at the port or FOU and Headquarters strike on the road  was because    the Customs and Excise Management Act, CEMA, Cap 2004, provides  that certain  Consignments  should be scanned  while some   should be subjected  to physical examination.  It i is not surprising why most importers whose cargoes come under physical examination are usually the ones  that are having problems at the port.

Abdullahi, the Tincan Island Customs boss and his Compliant team officers may have  sanitised the port as traders and other  importing Companies  struggle to be listed among the compliant importers to enjoy the trade benefits.

The situation was not the same at the premier port, Apapa,  where most of the fraudulent importers with their agents formerly operating at Tin can Island port were said to have relocated to do their transactions, , thus abusing the clearing process at the port. The number of Containers    and vehicles released from the port   which had fallen into the waiting hands of the FOU, Zone A, Ikeja, Operation and Lagos Roving Team,  headed by Riks Lura, a  Chief Superintendent of Customs  speaks volume.

An insider informed The Vale News , that one Ajao, a Superintendent and Head  of the Command , Information Patrol Team, who has  his officers stationed at the seaports ,  Murtala Muhammed , International Airport, MMIA, Ikeja, and the land border Areas  are doing  good  job by working  closely with  the e Riks led  Team through release of credible information  which have assisted the  members stationed along the Oshodi-Apapa Express way  to intercept suspected Containers with ease.

There is hardly a day that   the  Mohammed Aliyu, s boys, as they are fondly called, would not transfer one suspected  Container or the other  to the Command  . It  could not be ascertained the seaport where a  suspected  ”40” Container loaded with   banned  Pharmaceutical Codeine Syrup  which fell into the waiting hands of the Team was released from.  As at press time , it was still a guided secret  as officers  maintained closed lips. Going by the CEMA  rule, the Consignment would be seized as a lesson to other importers who are not trade compliant.

A source who spoke to the Magazine confirmed that  the Command two ware house at Ikeja , had been s filled up with  detained and seized vehicles,  that the  Command  has started  experiencing space constraint to accommodate other items.

The situation is so bad as that the Command premises has been turned  into a car porch  gong by the number of exotic vehicles including accidental ones parked in the premises by  both the Riks led Operation and Roving team members as well as the Strike Force led by one B. Ahmed, a Superintendent  of Customs, who was said to have taken over the jungles in the south west geo-political region chasing smugglers of Contrabands, vehicles and foreign parboiled rice.

The leadership of the  Association of Nigerian  licensed Customs Agents , ANLCA, National  Association of Government Approved Freight Forwarders, NAGAFF, and National Council of Managing Directors of Licensed Customs Agents,NCMDLCA,  who dominate the clearing business at the seaports, Airport and land Border Areas, may  have known that they have  lost the  battle  to force Ali, the Customs boss,  to dismantle the multiple checkpoints  mounted  on the road that that they  may have  shelved their earlier  plan to disrupt activities at the Lagos seaports by withdrawing their services last Monday.

The aggrieved agents had identified  10 various  Customs Units   operating inside and outside the port .  They cited  the FOU, Zone A, Team.  Special Force,  Headquarters Strike Force, led by Abdullahi  Dahiru Kirawa, a Deputy Comptroller,  Information Team, Customs Police among others.  They believe that  the teams were obstructing trade facilitation with the  administrative  bottlenecks created on the road.

Ali, the Customs Comptroller General, may have ignored them because of the good jobs which he claimed, the Teams were doing on the road. This is evident going by the type of Consignments that had been discovered in some of  suspected Containers that had been  transferred to the Command warehouse  for re-examinations as  well as  intercepted exotic vehicles released from the port and the unapproved routes at the land Border Area.

The Customs helmsman has every reason to ignore the agents  and allow the Teams do their work  on the road because of the billions of naira which had been recovered for the government  which ordinarily could have entered into private pockets.