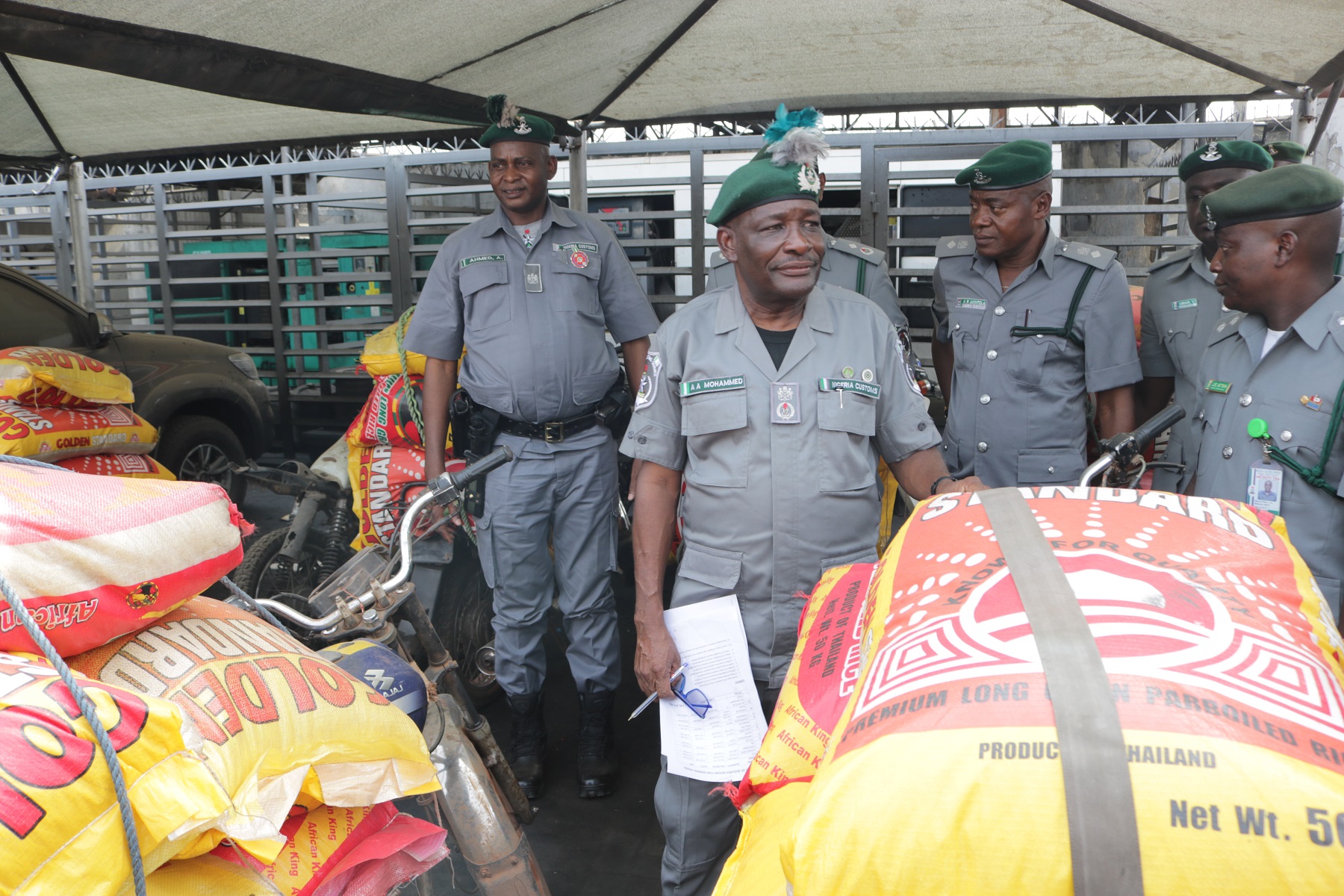 Mohammed Aliyu, Comptroller, Federal Operations Unit, FOU, Zone A, Ikeja, Lagos, is a happy man. Mohammed’s source of happiness was how the Command has been able to suppress  the activities of  smugglers in the south west which is what is acceptable the world over. This is in addition to checkmating the  importers syndicate at the Lagos seaports over alleged flouting  of payment of appropriate duties and faking of documents to take delivery of their  Containerised  cargoes.

Mohammed, who was said to have put into maximum use the  Command’s  Operations and Lagos Roving team, the Strike Force, Rapid Response team and other Surveillance tea, maritime analysts said, could go to bed without worry  as Mohammed Ubah garba, his predecessor and now Comptroller of Seme Command may have a standard which he had no option but to sustain and improve upon as he is under the close watch of the Management and the Presidency.

Given the seizures recorded and the number of exotic vehicles detained between August 17, 2018,  and December 10, 2018, the Customs Comptroller was said to have thrown the door of the Command premises and the warehouses open to Journalists on Tuesday, December 11, 2018,to see things for themselves. Recall that The Value News had published  a recent report about the Command premises being turned into an unofficial car mart where exotic vehicles including bullet proof, intercepted by the  Riks Lura, a Chief Superintendent of Customs and his officers in the Operations and  Lagos Roving team and other teams were displayed. The premises was said to have been occupied with the seized and detained vehicles , that the  Operations and the Lagos Roving team drivers were forced to re-park the seized vehicles  kept at the Command Mechanical workshop turned warehouse to create space to keep additional intercepted vehicles and Containers.

It was learnt that the less costly brands of vehicles were transferred to the warehouse while the costly brands , such as the Jeeps  and bullet proof were kept in the premises.

An elated Mohammed,  disclosed that the Command made a seizure of 24various brands of vehicles intercepted because of the inability of the alleged owners  to  provide the relevant documents to show that the vehicles were not smuggled into the country through unapproved routes  while 34 of the intercepted vehicles were detained as the owners still have opportunity to take delivery of them.

They are: three bullet proof, one Lexus Jeep(2016), two Land Cruser (2017/2018),six Toyota Camry, two Toyota Hilux,(2017), Nissan Navara,(2016), among others. The Duty Paid Value, DPV, of the 34 detained vehicles alone, according to  Mohammed, the FOU, Zone A, Comptroller was about N581.045 million, an indication that the importers with their agent may have shortchanged the government with their Customs collaborators on the Vehicle Seat at the seaport.

The Magazine learnt that some of the detained vehicles had earlier been released to the importers after payment of  the Demand Notice, DN, which runs into millions of naira.

Investigation by the Magazine shows that since the Command stepped up its anti-smuggling operations to forestall the smuggling of vehicles and other prohibited goods through unapproved routes in Lagos and Ogun states, into the country. Many  smugglers who could not face the superior fire power of the anti-smuggling officers of the Command were said to have relocated to Benue and other parts of the north to continue their illegal business.

The Command patrol teams may have sent a signal to the smugglers that there is no trick that could be employed by them to carry out their nefarious trade that would not be dismantled. It was not surprising   why those who use motor cycles, porpular, Okada, to smuggle foreign parboiled rice instead of using vehicles had fallen into the waiting hands of the officers. The Magazine cited some of the motor cycles with the bags of rice still tied on the passenger Seat.

As at Tuesday, December, 12, 2018, the rice contents of the motor-cycles, had been taken to the warehouse. Mohammed who confirmed that as at December 10, 2018 the Command had seized 39,664 bags of foreign parboiled rice, equivalent of 66 trailers load of rice said more seized items are coming.

The FOU, Zone A, Customs boss,  may be waiting for the Committee which Hameed Ali, a retired Colonel and Comptroller General, Nigeria Customs Service, NCS, had  promised would be set up to handle the sales of the condemned food items and vehicles to the public.

Indeed, Nigerians are waiting to know  when the sales would begin going by the strange faces found  around the Command vicinity daily. Some of them were said to have  come from distant places to make enquiries from residents within the area to ascertain when the auctioning of the condemned food items and vehicles would begin. But for the tight security at the Command, some of them could have found their way into the premises to make their enquiries.

Perhaps, one area that the Command may have made an impact  that had continued to be the talk of the day in Customs and Nigerian Drug Law Enforcement Agency, NDLEA cycles, was the seizure of tramadol drugs  at different ports in the recent times.  Going by the records made available to The Value News, the Command was said to have made 710 cartons of tramadol seizures valued at about N808 million.

Jerry Attah, an Assistant Superintendent of Customs and the Command Spokesman stressed that the non compliance to all import clearance procedures and extant laws  of the country  by stakeholders will always put them into trouble with the Command because of the ”zero tolerance to  deliberate infractions”. This is evident with the seizure of a 20ft Container load of unprocessed wood heading to the seaport for Shipment to China, which has a ready market for it.

The Command may have also  beamed its searchlight on the Chinese and their Nigeria Collaborators Pangolin Scale  and Elephant Tusk dealers. Given an insider information, Mohammed, the Command Comptroller,  revealed the seizure of 17 sacks  of Pangolin Scales, weighing about 510Kg, valued at about  N110.16 million.

Muhammed, a former Comptroller of the Command,  may have started the war against the Pangolin Scale and Elephant tusk dealers which was  said to have attracted  Ibrahim Jibrin,  the minister of Environment to the Command last April. The minister who showered praises on the Command for their good job, urged  the officers to sustain the tempo of the anti-smuggling war to save the endangered species in Nigerian and other African countries.