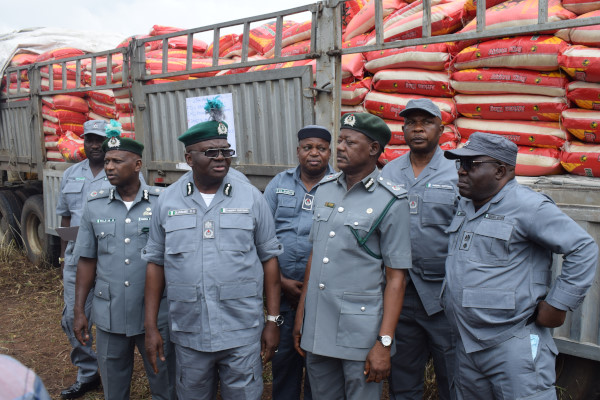 Those who think that the Border drills across the south, south west, north west and north west, will slow down the anti-smuggling operations of the Federal Operations Unit, FOU, Zone C, overseeing Cross River, Akwa Ibom, Rivers, Bayelsa, Delta and Edo, the six states in the south south-south and the five states in the south east  would be disappointed.

This is because the Joint Border security Operation spear- headed by Hameed Ali,  a retired Army Colonel and Comptroller General , Nigerian Customs Service, NCS, in Collaboration  with Mohammad Babadende, Comptroller General , Nigerian Immigration Service, NIS and Heads of other Security Agencies, including Magaji Bichi, Director General Department of State Security, DSS, and  the Directorate of Military Intelligence, DMI, appears to have emboldened the Command  to ensure that smugglers who had escaped Aliyu Mohammed’s patrol teams in the south west geo-political region would not find easy in the south-south states of Delta or Edo.

This is evident  going by the spectacular seizures of rice and Thai parboiled rice  made by the Command  between July 29, 2019 and now. According Olusemire, the Command  Operation Officers under the close watch of Ahmed Shuaibu, an Assistant Comptroller of Customs ,   effectiveness on the road  facilitated the seizure of the prohibited items.

He appears to have sent a message to the smugglers: if you pass through Ondo, Ifon  Sabe , Sapele, Mfum,  Ikot Ekpene or any other major smuggling route in Ondo, one of the states in the south westor Delta, Edo , Akwa Ibom or Cross River state , the Command patrol teams  will  fish you out’’. He stopped short at saying that the Command patrol teams are everywhere in the south –south and south east geo-political regions to do their job.

Indeed, not many people had expected the Command  to intercept a Dangote  trailer loaded with Cement but Concealed  with hundreds of ‘’50’’ bags of foreign rice in  it. Note that the Borders had been closed by Ali, the Customs Comptroller General in Collaboration with Babandede, his counterpart in NIS, at the instance of the Katsina state born Nigerian President, ostensible to contain the activities Thai parboiled rice smugglers and human traffickers across the nation’s maritime Borders.

Olusemire and his patrol teams in Cross River state, Akwa Ibom,Delta , Edo and other states in the south east may have made the seizures, particular, foreign rice, in conformity with the  government policy to promote local rice production  in order to make the country  self- sufficiency  in food production  like the Asian countries of  Thailand, Indonesia, Malaysia and the Industrialised nations.

Given a further break down of prohibited items  seized by the Command within the period, the FOU, Zone C, who could not hide his feelings said the Command also made a  seizure of medicaments,  second Hand Clothing and  tyres.  This is in addition to the seizure of 13  exotic  vehicles  that may have passed through unapproved routes  in the south west  to enter his areas of Jurisdictions in the south-south and south east  to fall into the waiting hands of his patrol teams.  The value of the foreign par boiled rice  and other prohibited items seized by the Command including the vehicles  that had contravened government fiscal policies , according  to Valuation experts  is N500 million.

The good news was that seven of the smugglers , who had expected to escape with their smuggled goods were arrested  and detained. There are  indications that the seven suspects, smuggled goods had been forfeited to government after Court condemnation and may be  dragged to Court as a deterrence to other smugglers..

Appealing to Nigerians  to acquaint  themselves  with the country’s  import and export  prohibition list, Olusemire  disclosed that’’ it is the only way to avoid running into trouble with Customs patrol teams on the road’’. The Customs Comptroller maintained that’’ as long as  Nigerians are not ready to change their smuggling  habit , the Command   will not hesitate to go after them , no matter the trick applied  to beat Customs to it’’.

The Magazine findings shows that most of the vehicles seized  by the Command had been released from Port Multi-services Terminal limited, PTML, and Five Stars Terminal,  two terminals , handling Vehicle imports at Tin-can Island port.  Recall that the President had banned the importation of vehicles  and foreign rice through the land Border on January 1, 2017.

He warned those who smuggled vehicles into the country and still claimed to have  imported  it through the port to watch it .’’ If we intercept your vehicle and you claim it was wrongfully done as it was imported through the country’s seaport, we  will confirm  if appropriate duty was paid  or not.  If it was confirmed t that the vehicle was imported through the port but not properly valued,’’ we will slam Demand Notice, DN, on the importer’’, he had said.

He cited the Containers and vehicles,  intercepted by the Command recently which after going through the import documents   tendered by the importers, to show that they had paid the relevant duties, it was discovered  that they  short changed  the government  forcing the Command to issue a DN, to them.The importers  caught in the act were said to have paid the DN, without Complaint to take delivery of their intercepted  Container and vehicle.

Many believe  that Olusemire could stand tall among his Contemporaries in the anti-smuggling war, that he could intercept    suspected Containers and Vehicles that FOU, Zone A and the CGC Strike Force in Zone A,Lagos, under the close watch of Usman Yahaya, a Deputy Comptroller and his patrol  teams could not intercept on the road out of alleged over familiarity with importers.

Maritime watchers are even surprised that FOU, , Zone C, could make rice seizures,  when  the two regions under his jurisdiction do not share land Border with Republic of Benin, Niger or Chad   like the states in the south west, north west t or north east.  The only relationship , according security sources,  the Command has with the Central  African country of Cameroon alone, was through the waterways in Cross River, particular, Bakassi, and the  Opobo axis in Rivers state.