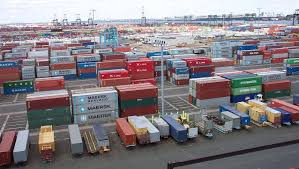 Between last month and now, there had been fears that Tincan Island Customs Command under the current leadership of the n nonsense and uncompromising Musa Abdullahi, popular, MBA, in Customs circles, may no longer be a match to Apapa Command in terms of revenue generation for the government.

This is because some of the valuable   importers patronizing the Tin can Island port, were said to have relocated to the premier port, Apapa on the advice of their agents as they could no longer stand the stringent measures put in place by Musa, the Customs Comptroller, which have no room for non-Compliant importers.

The situation of the port may have been made worse with the relocation of SIFAX Operational office, from the port to Apapa, with most of  its valuable importers and exporters, which Maritime analysts believe could drastically affect the daily revenue collections of the Command.

Note that the major problem of importers using the Tin-can Island port over the years had been wrong Classification, under-declaration, under-payment, Concealment and Machine, outside, MO.  Former Area Comptrollers of the Command were said to have done everything  within their powers to stop the mess but that was how far they could.

Investigations by The Value News shows that the major gross of the agents against the  Command  was the  multiple alerts over alleged infringement. The alerts which were said to be coming from the Comptroller’s office, Valuation,  Enforcement was a big blow to the non- Compliant  importers who may have thought they  could do anything and get away with it. They got it wrong.

The Magazine findings shows that instead of the revenue  of the Command reducing , it had continued to increase, an indication that the relocation of  the  Tin-can Island based importers to Apapa port and other Terminals within Lagos, have not  really had any impact on the  revenue collections of the Command as it had remained within the daily billion naira bracket in the last one month. Take for instance, on Monday, September, 16, 2019, the Command , was said to have generated  about N1.5 billion while Apapa Command paid into the Federation Account  about N1.2 billion.

It was learnt that at some other times, Apapa Command daily revenue Collection had surpassed that of the Command. It shows the level of revenue  generation  Competition between the two Commands, described as grade A, in Customs circles.

Recall that Mercy Ogeogwu, a Lagos based clearing agent , had dropped the hint about plans by some agents to stop patronizing   Tin –Can Island ports to take delivery of their clients Consignments when she talked about the frustration which they were going through  because of the multiple alerts at the Command at a  workshop Organised by the National Association of Government Approved Forwarders, NAGAFF,  at its ,Apapa,Village .

, The disclosure may have forced   Kaycee Ekekezie, an Assistant Comptroller General , ACG, of Customs , in-charge of Zone A, who at the event to give a tacit  order to Dera Nnadi, a Deputy Comptroller, in-charge of Tin-Can Island Command  Enforcement Unit, who was said to have represent Musa, the Area Comptroller, to find a way to reduce the numerous  alerts

Mohammed  Aliyu, the FOU, Zone A, Comptroller, who was also at the meeting was said to have corroborated the ACG’s views  that the multiple  should be reduced to one as problems  boil down to one: non –Compliance.

Unknown to many, the Tin-Can Island Customs Comptroller, was merely testing the waters. He has a plan B, on how to  bring  sanity to the clearing process at the port. Given  the evaluation of the problems associated with the  multiple alerts and the criticisms that had trailed it over the months, the Area  Comptroller with the support of his Management Team , were said to have reduced it to  a ‘’ one stop shop’’ alert, which was a big relief to the importers with their agents.  That much was confirmed by the Customs Comptroller.

When The Magazine  visited the port on Wednesday, September 18, 2019, the usual crowd of agents found at the Commmand premises  moving from one office to the other to settle the problems  arising from their clients imports have disappeared.  Ogom Okonkwo, a Staff of one of the agencies , who spoke to The Magazine  on condition of anonymity  said there was  no business   coming to the Command  to waste time if ‘ there was no  query  or alert of  infringement on the importer’s Bill of Lading.

Okonkwo gave kudos to Musa and his Management Team, for addressing the Complaints of the agents over the problems arising by the multiple alerts’’. Appealing to other Customs Comptrollers in other revenue generating Commands to take a cue from Musa, stressing that it is only way to to facilitate trade at  the ports.

Many believe that what is going for the Customs Comptroller was his experience having worked as Special Assistant to nine former Deputy Comptroller Generals of Customs, Tariff and Trade, which is the engine house of Customs , which may have exposed to Customs Operations and how to block  areas of revenue leake.

One of such retired DCGs, who was said to have  made  an appreciable impact him, that may have prepared him for leadership role  was Julius Nwagwu, regarded in Customs Circles as an encyclopaedia of Customs Tariff. Another person was  Olufemi Talor,  a retired Assistant Comptroller, T&T,. Note that Nwagwu , may have retired, but insiders told the Magazine  that Hameed Ali, a retired Army Colonel and Comptroller General , NCS, still utilize his services on Tariff and Trade.

It was not surprising  why Musa , the Tin-Can Island Customs boss has an edge over his Contemporaries who joined the service in 1990: Always thinking on how  to improve the revenue Collection of his Command. He may have known that the that he could only be judged  by the Management by the revenue generated and paid into the Federation Account based on the yearly target given to the Command.

He may have sent a signal to the importers and agents when he set up  a Compliance Unit Headed by  one Mahmood Ibrahim, a n Assistant Comptroller, described in Customs Circles as a revenue wizard that it is no longer going to be business as usual. The Magazine  learnt that  there was pressure on him to appoint a Deputy Comptroller to Head the Unit  but he stood his ground.

Yusuf  Lawal,  disclosed that  it was a wise decision as the daily revenue collections of the Command had continued to go up over the last couple of months without any sign of going to drop soon , despite the Command losing some of its Valuable Customers to other Command.

The increase was attributed to the issuance of Demand Notice , DN, to importers found to have made under payment, wrong  Classification or whose imports were under- valued. This may have informed why Agents had described the Ibrahim led Compliance Unit as a DN Unit. Perhaps, to make the job of the Unit easier, , the Tin Island Customs Comptroller, who is a product of World Customs Organisation and an  expert on Valuation and Classification, who is coming up with new ideas on how to facilitate trade at the product had categorized the importers using the Tin-can Island port to take delivery of their Consignments into there: Compliant, Semi-Compliant and Non- Compliant. He may have adopted the strategy to avoid lumping the importers together to go through the same clearing which ought not to be.

Going by the categorization of the clearing process at the port, the Compliant importers, which were mostly the multi-national  firms, Cadbury, Wahum, Lever Brother and Nigerian tobacco Company Limited among others,  are given expres permission to take delivery of their cargoes as soon as it arrives the port. The Companies were said to have been profilled  over the years and had not been found  to be involved in wrong dealings associated with  wrong Classification, Under Valuation.

Insiders informed The Magazine that even if the Customs Command Compliance Unit have any reason to raise a DN, for any of the Companies, the officials are always very happy to settle bill without Complain.  The Semi Complaint ones,  according to sources , also enjoy some privileges  at the port, because they are ready to pay any DN, issued their Company without protest. The non-compliant, who form the bulk of the importers at the port, the Magazine was informed are those who cut corners: involved in Concealment, wrong Classification in order to make underpayment.

The non-compliant importers with their agents are ready to fight it with Assistant Comptroller Ibrahim’s men handling their documents at the Compliance Unit. There had been several cases, according to an eyewitness account, where Ibrahim’s Office was said to have been turned into a shouting match over a DN issued. Those who said to have   attempted to penetrate the ranks of the Unit had been disappointed as the Customs AC and his Officers could not be Compromised as they have insisted that the right things must be done.

This may have  informed why the Tin-can Island Area Comptroller master-minded the setting of the Command Conflict resolution Committee , Comprising of Officers and Representatives of Agents with Uche Ejesieme, a Superintendent of Customs and the Command Image maker, service  as Secretary to resolve disputes arising  from Compliant from importers with their agents on a round table. The Committee was said to have resolved many cases amicable without going to Court.