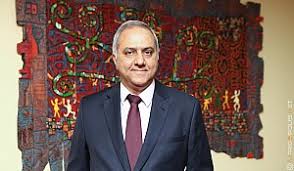 Hopes brighten for the completion of the Lekki  Deep Sea port, located in the outskirts of Lagos, as China Development Bank grants a N629 million for the project. The  loan  was said to have been successfully negotiated  by  Tolaram Africa, a member of  the Tolaram  Group, the   parent Company of  the Lekki Port LFTZ Limited  in Collaboration with the China Habour Engineering Company, CHEC, which has acquired  the majority shares in the multi-million project.

That much was confirmed by the Lagos state government  in a Statement  an  indication  that the loan was secured  from the Chines Bank after the Chinese Company , CHEC,   acquired 52.5 % , shares in the project . Already the Chinese firm has  signed a 45-year concessionary  agreement  with the Lekki Port LFTZ , overseeing  the  project.

Babatude Sanwo-Olu, the governor of Lagos,  whose state and the Nigerian Ports Authority, NPA, also  own  share  in the project  could not hide his feelings as he declared that the signing of the concessionary agreement and  the $629 million  loan secured from   the  CDB, has ‘’ended  a period of uncertainty  that had characterized  the delivery of the project’’. He  said that the completion of the Project would   gulp $1.6 billion and would go a long way to invigorate  the  state  economy.

Prior to shedding its weight in the  Lagos deep seaport port, Haresh Aswani, an Indian and Managing Director, Tolaram Africa, had said  that that the Company  had no option but to go  for the CDB loan facility,  because ‘’it was not easy   to raise all the money needed for  the financing the project from the shareholders alone’’.

Take for instance , the Tolaram Group, represented in the project by the Tolaram Africa,  initially had  a 75 % equity in  the project, Lagos state government 20 % and NPA  5%, which gave the Indian firm a majority shareholding and responsibility for the building of the port.

Many believe that the Tolaram Group hay have taken the business decision to  dispose  majority of its shares to the Chinese , because it could no longer the cost of building  the facility because of other Competing needs. The deal was said to have been sealed after several months of discussion including visit  by the officials of the Chinese Company to Nigeria to assess the  state of work at the deep seaport before  agreeing to commit their funds to it.

Convinced that it was a viable project worth investing in, the Company  has no option but   to take over  the 52.5% of its Tolaram Group  shares in the project  leaving the Indian investors with only  22.5 % . The good news was that  the  Lekki Deep seaport project will  be financed  with the $629 million loan from the CDB and an additional $470 million value   in equity  from the CHEC, which now has a majority shares in the project.

Note that work on the multi-million  project  , regarded as the first deep seaport in Africa had been stalled over the years  because of paucity of funds. It is not surprising why officials of Tolaram Group , particular,   are optimistic that the Chinese Bank loan  and the involvement of the Chinese , investors in the project would speed up  the on-going massive construction work at the project site

Recall that prior to the Chinese Company  buying into the project and the CDB multi-million dollar loan facility, a Consortium of six Banks, comprising of  African Development Bank, ADP, who has Akinwumi Asina, a one-time minister of Agriculture and Rural Development as the President,  the European Investment Bank, EIB, Standard Chartered Bank, SCB,  RMB, African Finance Corporation, AFC, and Standard Bank had  provided the funds for the  financing of the project.

The six Banks may have agreed to participate in the joint  financing of the project when approached by the Tolaram  Group , which incidentally is the parent company of the  Lekki Deep seaport LFTZ Enterprises Limited, overseeing the project , which maritime analysts believe would pressure of cargo traffic    at the  Apapa and Lagos Island  ports.

Biodun Dabiri,, Chairman, Lekki  Port Board  of Directors,  is a  happy man  that  work would resume  soon at the  deep seaport after several months of inactivity due to financial constraints.  Describing the development port   as very  ‘’strategic  for the growth  of  the Lekki Free Trade Zone, LFTZ, the lekki Port Board Chairman, averred that it would enhance the economic growth of the country.

Seconte Davis,  NPA, Executive Director , Marine and Operations , may have spoken the mind of Hajia Hadiza Bala Usman, the Managing Director,  at a recent meeting  with stakeholders  at Apapa , when  he disclosed   that the promoters  of the  Lekki  Deep seaport project  ought to have  concluded  the financial closure of the port  project   last September but  shifted to Wednesday ,October 23, 2019, to  tidy up all the gray areas.

Davis, was  said to have made it clear to those that cares to listen  that the completion of the project would help shippers  to achieve ’’ economy  of scale  in shipping their Consignments  which requires  larger  ocean going  vessels   that will lower  their  cost  of freight  per twenty foot Equivalent  Units, TEUs that comes  into the Nigerian deep seaport.

According to him, the shipping companies  are taking advantage of the Lekki Deep seaport in building  larger   vessels as the port has  the draft needs  to accommodate  the bigger  vessels.   Given an  insider information,  he said  the  port  was designed  to have three Container berths , three liquid berths,  and long dry bulk cargo berths.

The NPA Executive Director  noted that at the completion  of the project, it would initially  handle close to 1.5 million TEUs of Containerised cargoes annually but  these would be increased  to 2.5 TEUs  in its future development.

Perhaps, to ensure that  the  bigger ocean going vessels  sailing  to the port would never encounter any problem on the Channel leading to the port,  he  dislosed that it would be dredged  to 14 meters depth, which would be deepened to 19 meters  as  vessel  traffic to the port grows, noting  that  the break water , which protects  vessels  from the waves  is currently 1.5 meters long.

The god news about the  multi-million naira Lekki deep seaport project,  according to maritime experts  is that  it will make an immense impact  on the nation’s economy  by creating   no fewer than 200,000 jobs ,and boosting the government revenue generation  by  about  $350 billion  over the  45 –year Concession to CHEC.

While  Aswani, the Managing dIrector  of the Tolaram Africa, the Company  which was initially overseeing the project believes that its completion would  solve the country’s export problems, Ralph Agbogu, Managing Director , Sovereign Gate International limited , an Apapa  based   Clearing agency  and Director, Public Relations, National Council of Managing Directors of Licensed Customs Agents, NCMDLCA, an Association that ranks  itself  as’’ trade facilitators,  experts in goods Classification, and interpretation of the Customs Tariff , believes  that the deep seaport  may not serve the desired purpose because of the’’ difficulty of accessing it’’.

Agbogu, lamented their recent visit to the port and how they have to find their way back to Lagos through  Ijebu-Ode, a town in Ogun state.  This may have informed why he suggests holistic review of the transport chain  to accommodate all relevant  areas of the sector   in order to increase its contribution to the country’s GDP, which currently stands at 7%.

Appealing  for  government  intervention to make the Lekki  deep seaport  accessible to Truck owners involved transporting cargoes from the port to the importers’ warehouse  or any other destination transporters and other people  involved in the transport chain.

He may have exposed the shipping Companies when he an insight on why  the south eastern ports of  Warri, Calabar and PortHarcourt Area  I, in Rivers state  are  having difficulty in attracting vessels  to the ports despite all efforts .  He noted that an Onitsha based trader and importer in Anambra state, have no reason to patronise the Lagos  ports of Apapa  or Tin can Island to take  delivery of  their cargoes but   for the undue pressure from  the shipping Companies on them to do so.   Going by the law governing importation of goods, the importers have  the right to determine the port  to use to take delivery of their cargo.

Investigation by the Magazine shows that many  Onitsha based importers may not have wanted  to take delivery of  their Consignments  from the Lagos ports leaving  Warri port ,located in Deltata state , Port Area 1 Rivers state  or calabar  port, in Cross  river state which are closer to their business location.

An   Agbogu,   who was a  guest  of MARAN, at its recent Roundtable at the  Apapa  International Press Center  revealed  that  the shipping Companies   give a rebate of $100 to  the Onitsha based importers, particular, to force them to patronise the Lagos ports , in the south geo-political region  in order to abandon the ports  located in the Niger Delta , which are closer to the south eas traders.

He alluded to the shallow drafts in the nation’s seaports why  most ocean going vessels sailing to Nigeria ports with cargoes are transshipment vessels.A source at Maerskline shipping Line  told the Magazine that it is cheaper for them to land  any of  the  Lagos seaports  with their trans-shipment vessels which takes about three weeks than  taking their vessels  to the port of Warri, Calabar or Port Harcout rea 1, which may take about  three months.

According to him, it does not make any  economic sense to  go  to any of the south eastern ports to discharge importers’ Cargoes and return back to their base in  in Europe , North America or the Asian countries  of India or China to  carry other cargoes.