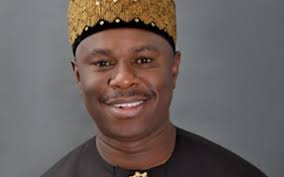 For years, Seafarers have been clamouring for improved welfare from their employers but nothing appeared to have happened.  They were said to have taken up the matter with past and present Director General of the Nigerian Maritime Administration and Safety, NIMASA, who were said to have promised to intervene but that was how far they could go.

They may have piled up pressure on Dakuku Peterside, the current NIMASA,  Director General who believes that the Seafarers deserve  a good lease of life with improved welfare to do their job as expected at the country’s seaports.

Iseichi Osamgbi, a Deputy Director and the Maritime Regulatory Agency, Spokesperson, noted in an effort to ensure improved working conditions for the seafarers in the country, the agency under the close watch of Peterside , has midwifed the signing of the Nigerian Seafarers Conditions of Service Collective Bargaining Agreement CBA, which had been on the drawing Board over the years.

The agreement, which was said to have been signed at the Agency’s headquarters in Lagos was said to be with the endorsement of the National Joint Industrial Council, NJIC, Collective Bargaining Agreement on minimum standards on conditions of service for Nigerian seafarers in both coastal and offshore sectors.

Speaking at the ocacasion, Peterside, who could not his feelings expressed his belief that’’ proper implementation of the agreement would bring about significant improvement in seafarers’ working conditions’’.

“As an Agency, we are happy to midwife this process that will enhance the welfare of our seafarers’’, he had said. Given kudos to the Nigerian seafarers’, and their employers in the offshore and coastal sectors for their cooperation and understanding in seeing through the whole process, he is optimistic that the Industry will witness a phenomenal growth  in the years ahead.

Appealing to the CBA, which is meant to guide ship-owners in their bipartite negotiations and the development of all employment agreements, to ensure that the agreement  is implemented as endorsed”, he averred that  it is the only way the Seafarers that their efforts on the negotiation table was not in vain.

The DG, who was represented at the event by Gambo Ahmed, the Executive Director, Maritime Labour and Cabotage Services stressed that the’’ conditions of service of the CBA is a minimum standard in line with the extant national and international regulations and must be met by all employers of seafarers’’.

Ahmed, who is the Chairman of the NJIC urged employers to note that the enhancement of welfare of seafarers will in turn enhance productivity and effective job performance. This may have gladdened the heart of the Seafarers  have had promised to put I their best to force more shipping Companies to patronize Nigeria ports because of good services.

Also in attendance to witness the event were stakeholders from the offshore and coastal maritime sectors, Maritime Workers Union of Nigeria,,MWUN, Association of Manning Agents of Nigeria, AMAN, National Seafarers Welfare Board ,NSWB,including  Representatives from the Ministries of Transportation, Labour and Productivity as well as the  management staff of NIMASA.

Recall that the CBA for the fishing sector had earlier been signed which may have encouraged the signing of the agreement for the coastal and offshore sectors, an indication that the Nigerian seafarers now have a complete CBA.

Note that  NIMASA under the leadership of Peterside, over the last three and half years  has consistently thrown its weight behind measures aimed at ensuring employers of seafarers to fall in line with extant and international regulations.