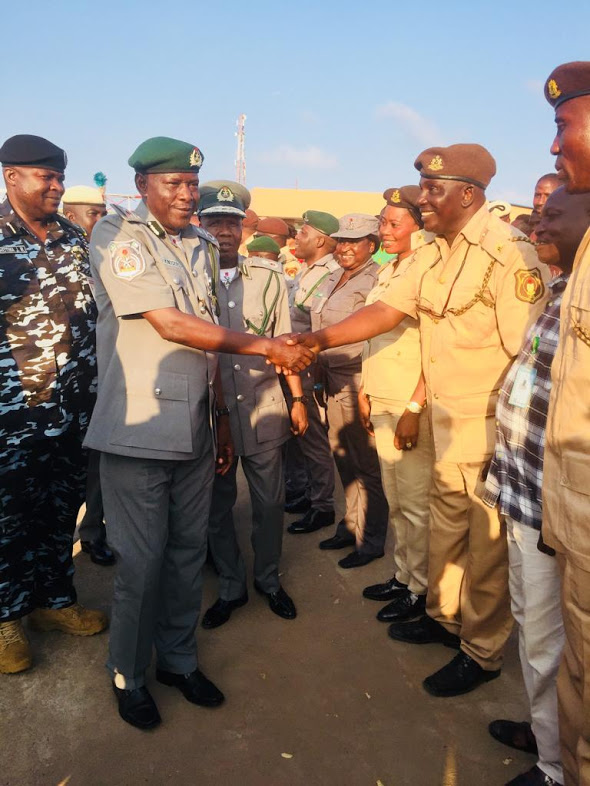 President Muhammadu Buhari,  of the Ruling All Progressive Congress, APC,  appears  to have sent a message to Nigerians that there is no going back on the  blanket ban on  Foreign Agricultural  Food importation into the country.

This is evident by on-going  by the  joint Border security Operation, being conducted by Hameed Ali, a retired Army Colonel and Comptroller general , Nigerian Customs  Service, NCS,and  Mohammad Babandende, his Counterpart in the Nigerian Immigration Service, NIS  in Collaboration  with the military , police and  other Security and Intelligence agencies.

At the instance of  Ali, the Customs Comptroller General , who is Heading the lead agency, Customs, the security and Intelligence agencies were said to  have joined forces  to,   launch  a Joint Border  security exercise  code named , in the military parlance as’’ Ex-Swift Response’’ as part of the  measures to secure the country’s land and maritime Borders.

A Statement by Joseph Attah , a Deputy Comptroller  and the  Customs Spokesperson said the Operation will  be executed   in the south west, south-south, north west and, north east excluding the land locked geo-political  regions of the south east and north central.

Attah, the Customs Deputy Comptroller may have known that the people of the Border Communities may be filled with  fear with the large presence of security Operatives and equipment in their locality  as he was said to have  appealed to them to remain calm and go about their normal business without any fear of molestation.  He had stressed that  that the ‘’overall objective  of the exercise  was to ‘’ensure a peaceful  and secured country in the interest of national security’’.

Security sources informed The Value News that the same movement of military and paramilitary personnel including Operational vehicles to the Border Stations in the south west  were also carried  out simultaneously in the south-south, northwest and north east for proper Coordination  by  Babagana Munguno a retired Major general and National Security Adviser, NSA.

Note that the adhoc Team has  an additional responsibility to tackle   ‘’terrorism, armed Banditry , smuggling, proliferation  of small arms  and light weapons, among  others’’in the affected regions. That much was confirmed by Attah, the Customs Image Maker.

Yusuf Magaji  Bichi, Director General, Department of State and State Security, DSS,may have fully prepared  for the national Assignment as he was said to have  m mounted  a Computerised  information monitoring vehicle in the premises of  FOU, Zone A, Ikeja, to be overseeing what the team members are doing on the  Border  areas. The fear of  many was that the Information Computerised vehicle would be profiling the calls made and received by the officers while on duty.

But the  FOU, Zone A, personnel has turned it  that  it was stationed to monitor what is happening in their Offices at the Command. Some of the senior Officers, a visitor, lamented , were said to have  started behaving funny to  friends using the DSS  Computerised vehicle  as an excuse, to drive them away from coming to their office,  claiming, that the Presidency  are watching whatever  is happening in the Command,. Analyst described this as   a sign of fear gripping the Officers and men of the Command, which may affect their productivity.

Investigation shows that  Ali , may have warned the Team members in order not to over step their bounds  by making it clear  that  Industrial  raw materials for manufacturing finished goods are not banned from coming into the  country through the Land Border. The Beninoise Authorities had made it clear to those that cares to listen  including the government that all Transit Cargoes must be routed through Seme/Krake Joint Border , an indication that Idiroko and Land Border Stations , across the country are out of it. This is where  the Border Officers and Men , have to Collaborate  with the Joint Border security operation Team to concentrate their efforts  on anti-smuggling Operations to actualize the President’s dream of minimizing smuggling activities in the country.

He is to be assisted by Abdullahi Kirawa, a Deputy Comptroller and former  National Coordinator of the Customs  Comptroller General , CCG, Strike Force. Until his redeployment for the national assignment, he has completed his documentation in Federal Operations Unit, FOU, Zone A,  Ikeja, and made to be  in- charge of Special Duties by Mohammed Alityu, the Area Comptroller. . Kirawa, as the DC, of the adhoc Team in the south west is expected to bring to bear his experience in organizing the old CCG Strike Forceand making   Spectacular seizures of rice in the various regions valued at millions of naira.

Security  analysts fear   that the  Team  may not make much  impact  in containing the activities of the smugglers in the Border areas, particular in the  six  south western states of Lagos, Ogun, Ekiti, Ondo, Oyo and osun which shares boundary  with the Republic of Benin or  the north western states of Kaduna, Katsina, Kano, Jigawa,  sokoto, Zanfara and Kebbi which shares boundary with Niger.

The situation, the  security analysts opined  may not be different in the north eastern states of Adamawa and Taraba, which share boundaries  with the Central African country of Cameroon  or Borno and Yobe, states,  which share boundaries with  Niger  and Chad,   under Boko Haram and the  Islamic  State West Africa Province, ISWAP, Insurgents siege, over the years, thus, making it difficult for both the NCS and NIS , personnel to do their job at the Border areas in the region

The question on the lips  is:  will the  Ex-Swift Response , which is a security exercise involving the military , para-military  and  and Intelligence agencies in the country be different from the military Campaigns  in the north western states of Zamfara and Katsina  or the north eastern states of Adamawa, Borno and Yobe?.

Many believe that by making   the  security  exercise open  before its implementation,, the government has already  made mockery of the policy  as the human traffickers and the Beninioise, Nigerien , Chadian and the  Cameroonian based smugglers  may go underground to keep the  adhoc Team members idle T According to Maritime analysts, they  may  dare  the adhoc team by going into the smuggling business on a  skeletal scale to keep the  Officers  busy to justify the huge government expenditure on them.

They had argued that what the government ought to have done was to allow the  adhoc Team officials  to hold  a round  table  discussions with the Comptrollers of FOUs and  Land Border  Commands across the country, including the Coordinators of the CCG  Strike Force in the Zones including the NIS  Border   and Highway Comptrollers, to know their areas of Challenge and how they could effectively come in to assist t to contain  the activities of the  smugglers and human traffickers.

The analysts had   noted that what the Team may be doing in the regions earmarked for the operation Ex-Swift Response may not be different from   what the FOUs, and the CCG, Strike Force across the country including the Border Commands, particular, Seme Command are doing: anti-smuggling Operations.

Many believe that what Ali and Babadende, his counterpart in NIS, had done in order to  win the ear of the President  was to throw  a purely Customs and NIS Operation open to  other security and Intelligence  agencies, particular, DSS.

At present the FOUs and CCG Strike Force , had filled the gap may have be left in the  anti-smuggling Operation of the Border Commands in the various zones in the last two years Take  for instance the operations and Lagos Roving Team, Headed by Riks Lura, a Chief Superintendent of Customs and the arrow Head , Akin Ainsoye, a Superintendent, who was said  to have participated in making most of the major seizures in the Command  , a source disclosed would be challeneged to do more.

Note that the Team, alone, had intercepted  over  15 bullet proof vehicles , donkey skin, and thousands of ‘’50  Kg bags of rice worth billions of naira in the last one year, a feat yet to be matched  in any other  FOU, ommand across the country.

Recall that the intercepted bags of rice, deposited in Government Ware Houses, all over the country, at the instance of the President in 2016, have continued to be allocated  to the internally Displaced Peoples , IDP Camps  in Adamawa, Borno, Yobe states, north east Nigeria  and Edo, in the south-south Nigeria.

Aliyu, the FOU, Zone A, Comptroller, who may want to sustain the tempo of anti-smuggling Operations in the Command was said  to have directed the various Patrol Team leaders under the Command to mobilise their men and go out for more spectacular seizures that would shake the country like the donkey skin, Tramadol and Codein seizures including the exotic vehicles smuggled into the country from the Border Areas on the excuse that they were cleared from  Nigerian ports.

The situation is the same  at the  Seme-Krake Joint Border which has only one functional route  , the Owode  axis to enter  the Lagos market with smuggled  goods, although, dotted with several watersides and Creeks .

Insiders told The Magazine that it  had been a major battle for  Muhammed Uba Garba, the Area Comptroller and his  Patrol Team leaders  ,over the last one year to the Contain the activities of the smugglers who had completely resorted to the use of the Creeks and watersides, to carry out their nefarious activities.

. Indeed, with the Collaboration of the  military  and other Border security agencies, the smugglers may have learnt their first bitter lesson that the  Seme -Krake and Owode  a no area as most of them were forced  to relocate  to  Ogun state  which have over 80  unapproved routes

Eyewitness account disclosed that  the  open arms in which Mohammed , the Seme Command Area Comptroller , welcomed the Team to the  Seme-Krake Joint Border speaks  volume, an indication that  there is no hiding place for the smugglers.

The worry of security watchers at the  Joint Border is where to keep the most of the food items that would be intercepted from smugglers  within the period of the Joint  security Operation at the Land Border, particular, foreign parboiled rice. This is where Ali, the Customs Comptroller General, should be thinking of constructing an additional Government Ware House at Seme Border to keep with the pace of seized food  items any time soon.