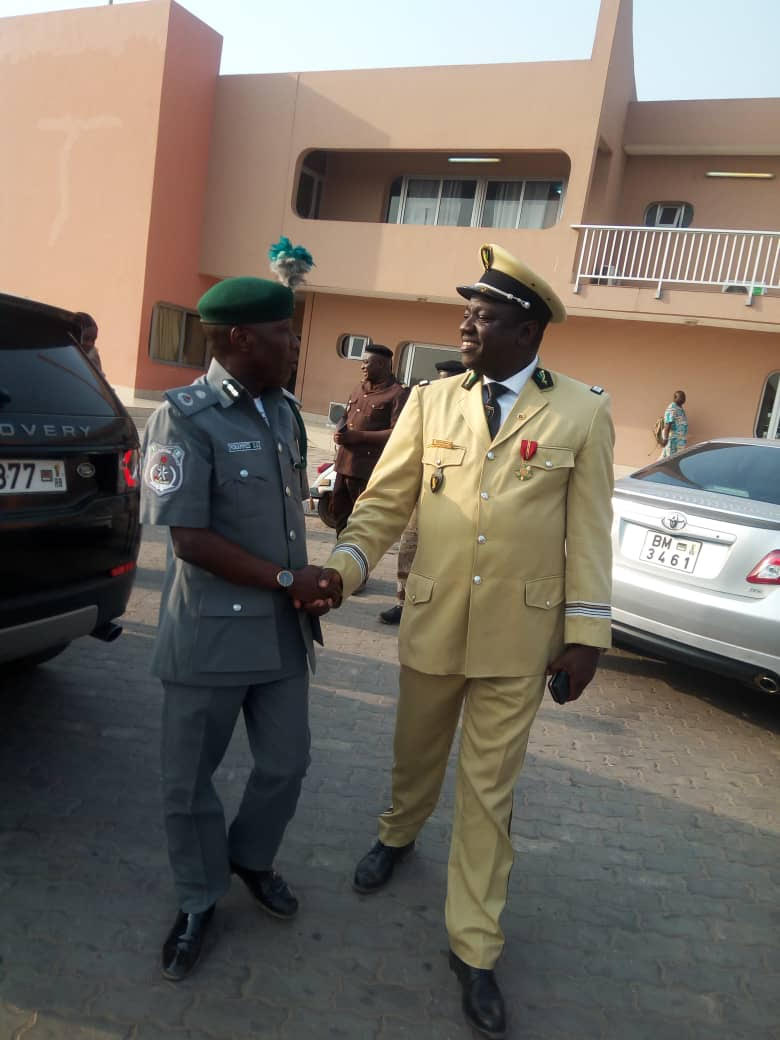 Muhammed Uba garba, Comptroller, Seme Command, has threatened to close Atlas Park at  the Seme-krake Border between Nigeria and Republic of Benin. Uba may have been encouraged to contemplate of closing down the park because of the criminal activities that have been going on there for years.

Given that everything about” illegality and Criminality” the Customs Comptroller was said to have announced some stringent measures to checkmate the activities at the park or close it down completely to forestall criminality in the area.

At a recent meeting with members of the Association of Registered Freight Forwarders Nigeria ,AREFFN, he disclosed that the Atlas Park operation at Benin Republic was against the international law of transit. The Seme Customs boss assured the AREFFN, that he would go ahead with his plan to shut down the park,” even if he has only one day remaining to serve at the command before he leaves to stop the rot”.

He revealed that building an alternative wall, not the Donald Trump type between the United States and Mexico, around the park would end the criminality. This may have informed the reason why he is building a wall to block the illegal park.

He recalled that on assumption of duties in the Command last August, he had  received complaints from Customs personnel at the Border that their Beninois counterparts are not respecting the law. According to him, ” it is the Beninois that are engaged in the economic activities at the park but have refused to respect the pact existing between the two countries that share the Border Community.

The Value News learnt that he had given the Bennois a deadline of  December 31st, 2018,to wind up their operations at the park or face unpleasant consequences which they may not like. He was said to have told Emmanuel Kayode Oguntuase, the Nigeria Ambassador to Republic of Benin and Hammed Ali, a retired Colonel and Comptroller General, Nigerian Customs Service, NCS, who was said to have given him his support.

The Customs Comptroller was said to have invited Charles Inousa Sacca Boco, the  Director General, of Republic of Benin Customs Administration for meeting with him over the project. The duo and the foreign partners were said to have inspected the final closure of all illegal outlets other than  the  single entry and exit of truck laden cargoes approved by the Economic Community of West African States, ECOWAS.

The Seme Customs boss was said to have insisted on the enforcement  on the international law on transit cargoes.” I told him there is no going back on the project” and he never protested or complained”.

He disclosed that Nigerians using the park for their transit cargoes could not meet the deadline as given. He stated  further that they came to him babbling, demanding for an extension of the deadline which was turned down. ”They have to get it right and that was what they did”, he insists.Perhaps, to put on human face, he the Seme Command boss was said to have given them up to February1st, 2019, to remove their cargoes from the park as it would be be blocked finally .

Given an insight to the part at the Joint Border Community, he said ”the essence of the joint Border post is for integration, cooperation and to integrate the local economy.He gave an insight of his sensitization visit to Owode, ”I have spoken with the Chairman of the local government to check the site”, noting that the Command have had several meetings with the market women, security agencies to sensitise them about the  closure of the illegal outlets. ”I have given them advice on the way things should be done at the joint Border post”, he volunteered.

He was said to have assured that ,“free movement of persons, goods services must be enforced in the joint Border. According to him, It is an European concept but managed by  the ECOWAS. Giving a further insight on the operation of  the joint Border , he confirmed that ”it belongs to neither Nigeria nor to Republic of Benin but a ”no man’s land taken over by ECOWAS. This may have informed the reason why he was  elected the  Chairman of the joint Border security Committee and his Beninois counterpart the Vice Chairman to oversee the Border and  ensure that the laws are enforced”.

The Customs Comptroller who enumerate the advantages of  closing  the Atlas Park to Nigerian agents  said it will end the existing  illegalities  and create the needed space for their loads.

He told the AREFFN, leaders who had visited him in his office that he has already provided a temporary park for importers with their Agents to keep their transit goods.  Appealing to the  Agents  to” cooperate and work with Customs personnel in making sure that their transit goods were directly handed over to them and escorted by the Beninois customs personnel and handed over to Nigerian Customs, noting that it is the only to avoid falling into the waiting hand of his men.   He is optimistic that if they make correct declarations without cutting corners to shortchange the government, more Nigerians will get work to do and it will reflect on the revenue generation of the Command.

Reacting to questions on the management and control of the  temporary park, he assured the Association that that they have no cause to worry as Customs would not cede the running of the park to any group that would turn it to another Atlas park”.