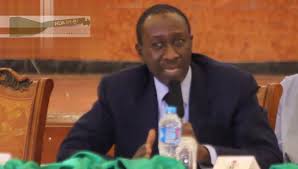 Between Monday, September 9, 2019, and Thursday, September12, 2019, Officers and men of the Nigerian Customs Service, NCS in Collaboration with the Nigerian Immigration Service, NIS, and other security agencies had made adequate arrangement to receive  Babagana Munguno, a retired Major General and National Security Adviser NSA, Hameed Ali, a retired Colonel and Comptroller general, NCS, and others on  Assessment of the Border drills at the Seme-Krake joint Border on Friday, September 13, 2019.

Note that the team had already visited some of the Border Communities in Katsina and other states in the north west geo-political region  to see things for themselves and were they very appreciative of the joint Border security personnel efforts to keep to the government  mandate of  closing the borders.

The Seme based Importers with their agents , who are worried that over  600  of their  trucks  laden cargoes valued at about N300 million scattered at the Economic Community of West African States, ECOWAS,  premises  at the border and the old Atlas park  used by the transit cargo importers to keep the goods.

Investigation by The Value News shows that about 250 of the trucks parked at the Benin Atlas park are could not gain entry into the ECOWAS premises because f the border closure as the over 300 that had found their way into  the joint Border Examination bay  had been  trapped.

The agents, particular, had  prepared to use the opportunity  of Munguno, the NSA, and Ali’s, scheduled  visit to the Joint  Border Community to see things for themselves to draw their attention to the plight of their clients, particular the multi-national Companies, like the Nigerian Tobacco Company, Cadbury,  among other Major  Manufacturers  which raw  materials are trapped at the border.  They had expected to  extract  a commitment from the NSA and Ali, the Customs Comptroller General to give them at least a week to process their import documents in order to  take delivery of their client’s raw materials.

The Magazine learnt that as at 8 A.M, Muhammed Uba Garba, the Customs Area Comptroller and his Immigration Counterpart   had moblised their officers to be on the red alert for the Team. Department of State Security Service ,DSS, personnel, armed to the teeth were on ground to strengthen the security at the joint border.  A red carpet had been laid for the NSA and his entourage but that was how far they could go.NTA Camera, was said to have been mounted to catch a glimpse of Munguno and his entourage  on arrival at the joint border.

Signs that the team may not keep to the appointment  began to emerge when there was no presence of Mohammeed Aliyu, Comptroller, Federal Operations Unit, FOU, Zone A, or Yahaya Usman, a Deputy Comptroller and Coordinator, Comptroller General of Customs Strike Force, Zone A, advance team at the joint border  to prepare the ground for Munguno and his entourage arrival.

Note that the Commissioning of the  two specialized anti-smuggling vessels, customs Pride and Group of Nine, the FOU  and CGC, Strike personnel had taken over the Navy Dockyard Nigeria Limited waterfront  to ensure security. In spite of the fact that neither the FOU personnel nor the CGC Strike Force Officers were not  on ground to  give the security agencies comprising of Customs, Immigration , Police and other security agencies personnel,  hope, the officers were still optimistic that he team would make it based on  assurance from their big men. The Officers were said to have lost hope of their coming when it was getting late into the day. It was gathered that when it became obvious based on the Communication between the team and the Customs and Immigration Authorities at the border town,  Muhammed, the Customs Area Comptroller, was said to have gathered the officers together to broke the sad news to them. He was said to have advised officers to go back to their offices and continue their work . Eyewitness account said the red carpet was quickly rolled away to avoid unauthorized persons stepping on it. The source disclosed  that within 30 minutes  the Officers have deserted the joint border leaving only the NCS and NIS  officials having offices at the ECOWAS building . The agents, according to the informant were the first to sneak out one by one out of the ECOWAS premises.

The Customs Comptroller appeal to the security  agencies  personnel to return to their offices may have dawned on the Seme based clearing agents that they are in for a long wait. They may have become more worried when information filtered from all the border areas visited in the north west geo-political region comprising of Sokoto, Zamfara, Kebbi, Kaduna, Katsina, Kano and Jigawa states and the recent remark in Lagos during the Commissioning of the $500 million two specialized Customs anti-smuggling vessels that there is no going back on the border drills.

The Magazine had reached out to his contacts in Lagos  to ascertain why the NSA and his team members failed to show up at Seme border Community despite the elaborate arrangement made to receive them.   The Magazine was  informed  that the elicopter  carrying the Team members came close to the border environment  but  could not land because of the alleged bad weather condition , thus forcing the pilot to divert the movement to port Harcourt, Rivers state, to assess the Border drill in the  south-south geo-political region.

Unconfirmed report said the team visit to Seme-Krake Joint border may have  been postponed indefinitely till further notice. Efforts to reach out to Joseph Attah, a Deputy Comptroller and the Customs Spokesperson through phone calls proved to ascertain what went wrong  proved abortive.

Information pieced together shows that  Munguno, described as an orator, in security circles, who is Coordination the Border drills  and Ali, the Comptroller General of NCS, the lead agency, may have used the bad weather excuse as a ploy to avoid meeting  with the leadership of the Association of Nigerian Licensed Agents , ANLCA, National Council of Government Approved Freight Forwarders, NAGAFF, and National Council of Managing Directors of Licensed Customs Agents, NCMDLA, who were waiting anxiously  to see the duo because of their trapped truck laden cargoes at the border.

Many believe that Bukar Abubakar Amajam, an Assistant Comptroller General, Coordinating the Border drill in the south west , may have briefed the NSA and the Customs boss about the situation at the border  that may have made them to change their mind.

An agent who spoke to the Magazine on condition of anonymity said while they fully support the border lock down to force talon who is sabotaging the Nigerian  economy to know his level, the government should take another look  at the plight of the transit cargo importers using the Beninioise  seaports . This is may  be a hard demand to grant.

President Muhammadu Buhari, had banned the importation of foreign rice and vehicles  through the nation’s land borders on January 1st, 2017. The Katsina born Nigerian President , had expected talon, whose country, supplies transit cargoes to the land locked countries of Niger and Chad to respect the trade Agreement with the Nigerian government.

Instead, the Beninoise government fiscal policies had supported the importation of Vehicles and foreign rice, particular, foreign parboiled  rice, which are not consumed in Benin, thus,  turning  country  as     smugglers’ haven. He may not have been hard on the transit Vehicles and foreign rice importers, let alone the smugglers because of the transit  duties collected  running into billions of millions of dollars annually. Niger has caved in to support the Nigerian government to fight the smugglers by effectively   checkmating the activities of the smugglers in their own country.

Investigation by The Magazine shows that despite the border lockdown across the country , vehicle smugglers  appear have developed new tactics to beat the joint security agencies to it. ‘’Give a smuggler a task to deliver a vehicle to you in your location in the north, it will be delivered without sweat’’. The border lockdown may have forced the smugglers to open new routes to carry out their nefarious trade which may never been known to Customs, Immigration or the soldiers involved in the border drills. There are fears that the  country is heading back to the 1995 era when late General Sani Abacha, had closed the nation’s land borders with the neighbouring countries of Benin , Niger and Chad , because of a  derogatory Statement allegedly made by Rosine Vieyra Soglo, a one-time  First lady of Benin,  against Hajia Maryam Abacha , his wife which he had considered as an insult. The border closured had forced many cross-border smugglers to go underground and to develop unimaginable routes of carrying out their illegal trades  including using the  Creeks across the country to smuggle foreign rice and other prohibited items into the country.

It  was not surprising why Nigerians are appealing to the government to have a rethink on the border closure to avoid giving to the smugglers who are hardened Criminals to change their strategies of doing the business. There are over 3000 border Communities that are scattered all over the country, most of the north and the south west. The NIS, may have given the impression that that there about 84 illegal routes  in Ogun state and 83 in Adamawa state used by the human traffickers and smugglers in the two states alone.

These excludes  the illegal routes, both known and unknown in other states of the Federation.  Geographers had made people to know that all the countries in the West African sub-region are either connected by land , sea or through the Creeks, an indication that it would be difficult to Completely eliminate smuggling activities in the sub-region  but to find  a way to  minimize it by the various African Heads of States and Governments in their respective countries.

They cited the case of the United States and Mexico over the  alleged smuggling of hard drugs into the North American country in which  Donald Trump, the President had  done everything within his powers to mobilise the country Lawmakers to support the erection of a high wall to demarcate the two countries to stop the smuggling but no luck.

Americans, say  smuggling of drugs into the country through unapproved routes from Mexico and other countries in the North American Continent  had increased in the recent time despite the tough security measures and advanced technology adopted to control the menace of smuggling in the country.

Hope the Nigerian government closure of borders with neighbouring Republic of Benin and Niger would not  be another   case of United States and Mexico, which was an effort in futility, security experts remarked.