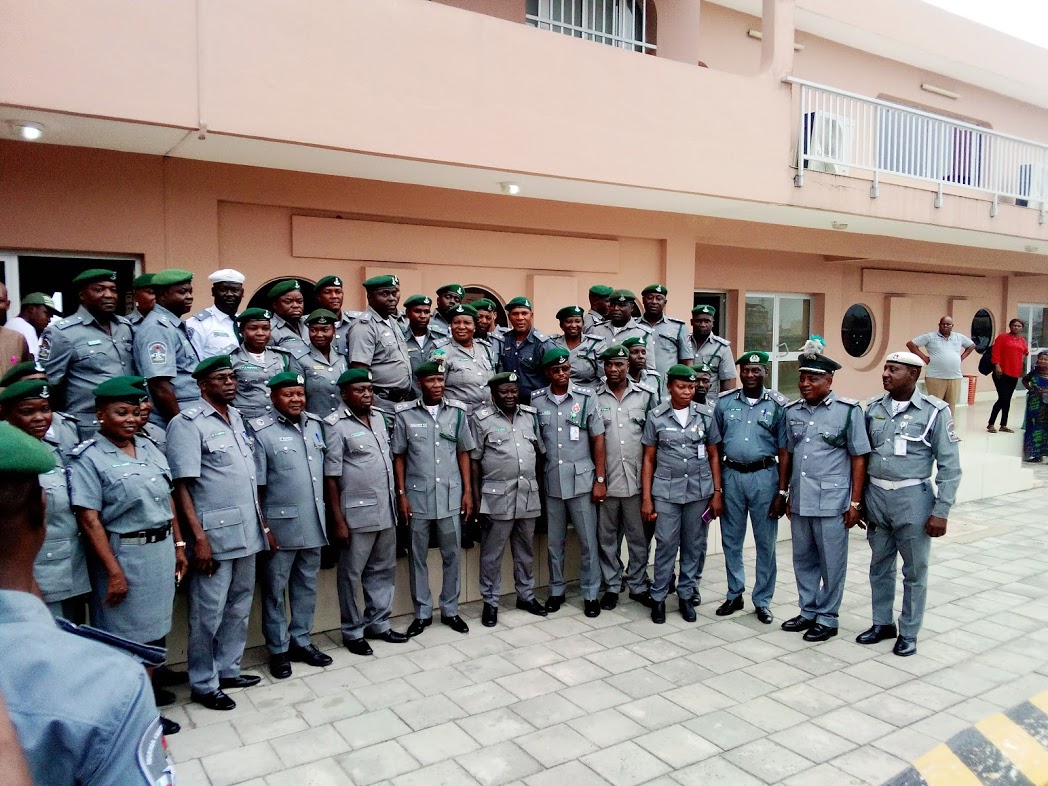 Barely two weeks after Ketylene Chima  Ekekezie,  popular, KC, an Assistant Comptroller General, ACG , and Zonal Coordinator, Nigeria Customs Service, , NCS, Zone A, Lagos, decorated the  Comptrollers, including three alone, from Seme Command and the Deputy Comptrollers,  who  scaled through the Hameed Ali, a retired Army Colonel and Comptroller General of Customs, CGC, organised promotion  examination and interview last year, at the  Yaba ,Zonal office,  the exercise, appears to  have  opened the flood gate for the Area  Comptrollers  under the  Zone , to follow suit.

On Wednesday, December, 4, 2019,  the 33  officers  from the  rank of Cadet Assistant Superintendents of Customs, ASC Ii, Deputy Superintendents, DSC, to Assistant Comptrollers, from the Command,  were said to have gathered at the Economic Community of West African States, ECOWAS, Conference room, at the Seme’Krake, a joint Border, to be decorated  by Muhammed Uba Garba, the Area Comptroller.

The Value  cited some of the officers, who  were said to have sat for the promotion  examination  but could not make it at the final stage , not out of poor performance but  because of  the quota  allocation policy of the government , n indication that each of the Federation has the number of officers that needed to be promoted in that state.  This  may have why  States like Bauchi and Niger, which were  said to be top heavy  may not have been worst hit in the promotion exercise.

As  a prelude to the decoration of the officers, in the Conferenceroon , with no vacant seats , for officers and invited guests, left,  Muhammed , the Custom Comptroller was said  to started with an adage: It is ‘’only God that promotes’’, perhaps, to restore hope to those  who did not benefit  from the 2018 exercise to be calm as they would still make it to the next rank.

He was said to be particular in his advice  to  new Assistant Comptrollers , who by virtue of their new rank, are now’’ cargo releasing officers’’, appealing to them  to have a wide knowledge  in order to be thorough in doing their job as releasing officers.   He was said to have also made it clear to them that they must be  technically sound, to avoid any problem with the field officers whose report would  guide  most of their actions. s The Customs Comptroller may be talking to the  Assistant Comptrollers based on  experience and   what is happening  at some  of the Commands, particular, at the seaports between the releasing officers and their fields over reports.

Recall that in the past some Assistant Comptrollers  from the Port Multi-services Terminal Limited, PTML, had been down- graded by one rank  after facing the Headquarters disciplinary Committee  over  wrong decision taken  that led  to the  release of  some  imported cargoes in which the government was said to have lost millions of naira.

The pep talk may have prepared the ground   for the  decoration of the 33 promoted officers, starting with the Assistant Comptrollers to the Cadet Assistant Superintendents of Customs in that order.

The good news was that the  officers have promised to ‘’ double their efforts in the Command  anti-smuggling and revenue drive  in order to meet the demand of the Service on them: to whom , much is given  is expected  from him’’.

For now, the officers  are looking forward to put into practice what they have learnt form the Border Drills operation  which  had led to the partial closure of the Borders with the enighbouring  countries of Benin Republic, Niger and the Central African country of Cameroon  in order  to prove that the Customs of  today s of today was not the Nigeria Customs of yester years where  officers do whatever they like and get away is over.. Some of the officers  confirmed that   the Border Drills comprising of the Nigerian Immigration Service, NIS, Police,  Military and  the NCS as the lead agency and o personnel including the Department of State  Security, DSS,  is very rewarding as they are  now technically sound to do the job.

The officers , decorated with their new ranks could not hide their joy as they  move about shaking  hands with their  Colleagues and friends.  Some of them  were  said to have  seen as a a great  in their life in the service as they saw it as an opportunity  to take pictures with their senior Colleagues   with the Area Comptroller for remebrance.

In a related development , the Border Drill, operatives at the Agbara Church gate, were said  to have arrested a CHISCO Bus ,  coming from the West African Country of Ghana,  with full load of Passengers . The CHISCO West Coast  Bus  was said to have also been loaded  with Contrabands. The question on the lips of most people, was how the Border Driil operatives , at Gbaji, could not arrest the bus , until it  got to Agbara Churchgate, where its arrested and returned back to Seme, where it is currently been detained.

Currious to know what the officers found around the  Bus were doing,the Magazine   in an undercover reporting as if  looking for someone on Wednesday , December 4, 2019, around the vicinity, found  some officers  still offloading  the jerry cans  of foreign  vegetable Oil  on the booth and transferring them to the government warehouse.

It was learnt that scores of ‘’50’’ bags of foreign parboiled rice had earlier been evacuated from the  bus and transferred to the government warehouse documented. There was a fierce looking soldiers armed to the teeth, watching over the Bus and job of the Customs officer to ensure that the right thing are done. The arrest of the CHISCO  Bust , may  have forced the  the Seme Customs Command,, Federal Operatiotion Unit, FOU, Zone A, CGC, Strike force, , Lagos Zone, and  the Border Drills operatives , at the various Checkpont to beam their search on all Cross-Border Buses along the Abidjan Corridor.

While the officers were  busy  removing the  Contrabands found in the Bus, there was   foul odour, oozing out from a parked Container from the government warehouse premises.  On  enquiry, it was gathered that they were cartoon of impounded  poultry products loaded into the Container.  It may have been an oversight why the Command had buried it. This is where Comptroller Muhammed  may have to take  immediate steps to  ensure that the decayed  cartons of poultry products parked in the ‘’20’’ Container were  quickly buried to avoid causing  epidemic  in the area.

The Magazine observed  a major racket going at the Gbaji  check point last Wednesday  where a table guide by four persons on mulfti, Coordinated  by the   soldiers  staying in a Nigerian Drug Administration and Safety Agency, NDLEA, cover stand . The Magazine observed how the solders preside over the collection of N500.00, from motorists who  are ready to pay the money  in order to pass one way in order  bead the long queue  on the approved lane for motorist to ply.   The popular Lagos bus, with the yello colour, according  to a co-passenger in the bus  do not hesitate in  paying the amount  which they consider as nothing  in order to leave the scene.

A fire work person in the bus was said to have lent his voice , where he had  two ‘’50’’  bags of rice  split in different sacks but was asked  to go by the Border Drills personnel, but the vehicle was stopped by an angry police, who may have schemed  out who insisted that the driver bring down the rice found in the vehicle. The police man ws s aid to have forcefully opened the door which the  alleged  fireworks person but was cautioned by the driver to the calm to avoid aggravating the situation.  The fireworks , person , who claimed to be from Kwara state, north central Nigeria, disclosed how he had lost over N200,00, engaging the services, of some Badagry Youths to cross  10 bags of rice , through the Creeks for him. He noted that the same Badagry  Youths he had engaged and paid to do the job were also paid informants of the Customs  as they quickly alerted the Marine officers who emerged in the scene  and  carted away the 10 bags of rice from the boat , preparatory to sail to  to location where they had asked to wait for the arrival of the  boat.