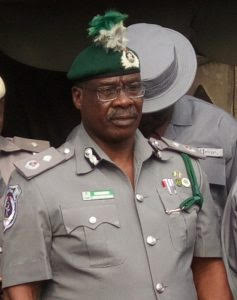 Abdullahi Kirawa, a Deputy Comptroller of Customs and National Coordinator, Comptroller General Strike Force, CGC SF, has no sympathy for smugglers. Kirawa, who believes there was no difference between smugglers and  armed robbers as the two set of criminals were used to  hard drugs and weapons to carry out their nefarious activities.

This is evident going by the number of officers who had been killed in different parts of the country for  daring to challenge them for smuggling parboiled rice and other prohibited goods from Republic of Benin and other neighbouring countries into the Nigeria market. Kirawa, the CGC National Coordinator of the Strike Force may have mobilised members of the team in the south west, north central, north west , north east and the south east to be on the alert to curtail the activities of the smugglers to create a condusive environment for Nigerian rice farmers and manufacturers to thrive .

Salisu Shuaibu, an Assistant Comptroller and Commander of the CGC Strike Force, Zone A, Lagos , may have got the message of the National Coordinator  that he had mobilised the team members to go after the foreign rice, vehicles and other prohibited items in the south west. The team was said to have  made nonsense of the federal Operations Unit, Zone A, Strike Force, as it had virtually taken over the anti-smuggling operations in the six  south western states of Lagos, Ogun, Oyo, Osun, Eki and Ondo.

Shuaibu may have sent a signal to foreign smugglers in the region last June that it was no longer going to be business as usual when  the Lagos Strike Force team intercepted 3,000 bags of 50Kg  rice at Ijebu Ode, Ogun state, which escaped the eagle eyes of FOU, Zone A, anti-smuggling officers on the road. The Ijebu Ode foreign par boiled rice seizure may have opened the flood gate for foreign rice seizure by Commander Shuaibu’s men on the road. Given that the Lagos Zone A , Strike Force , has no Warehouse  to keep its seized goods, it had no option but to make use of the FOU, Zone A, warehouse.

The Value news findings shows that the team has virtually taken over the Command warehouse in keeping its intercepted foreign rice in the south west , as the Command strike Force, headed by Superintendent Ahmed and the Rapid Response team, stationed at Oyo/Osun axis , where much of the smuggling of rice are made in the south west have failed to leave up to expectation.

A member of the Strike Force who spoke to The Value News disclose that the Strike Force boss hardly stays in the office as he shuttles between one Zone to the other to see the seizures made by his men instead of waiting to get the Zonal Commanders report to form his opinion about their performance. Last Wednesday, Kirawa, who was said to be in Calabar, Cross river state, could not hide his feelings when he was taken to a Customs warehouse where the 5,662 bags of 50Kg  of foreign parboiled  rice and 137 bales of secondhand clothing  valued at about N137 million intercepted by his men in Cross River and Akwa Ibom Area. The Owerri, Imo state, based  Zone C, which made the foreign rice seizures  has the responsibility of covering the south south and south east in its anti-smuggling operations. The major routes of rice smugglers in Cross river, a source told the Magazine , was Ikom and Bakasi . The Strike Force may have taken a cue from the operations of the FOU, Zone C, patrol teams , in these areas to launch their operations, which had yielded result. The importers may have  sponsored the smugglers to take the imported foreign rice to their warehouse to make Christmas sales.

An elated Kirawa disclosed that the seizures was made by his men  in line with the government’s policy  of ”curbing  the menace  of imported  rice into the country”.  Much of the foreign rice seizures may have been made at the  Bakasi  axis going by the involvement of the Naval personnel which handed over 2,153  50 Kg bags of the  intercepted foreign rice to the Strike Force team.

The Strike Force National Coordinator attributed the success of the Strike Force teams in the various Zones , across the country to the support of Hameed Ali, a retired Colonel and Comptroller General, Nigerian Customs Service who has” given them the required  tools to do their job”.

Appealing to the public to avail the Strike Force with ”useful and credible information that could  help  the team make more arrests”, he noted that the” seizure of smuggled foreign rice was high because of the Christmas season as smugglers activities were on the increase”.

He has vowed that the Headquarters Strike Force will sustain the tempo of anti-smuggling operations in the south south and south east until the smugglers in the area were ready to turn a new leaf with a view  to helping the country attain self- sufficiency in food production.

The Strike Force team  in the north central geo-political region may have made the largest seizure of smuggled foreign parboiled this December in a single operations in Kwara state. Smugglers in the south west geopolitical region may have relocated to the region  because of the believe that Ogun, Oyo and Osun states , may not be safe for them to carry out their nefarious trade as Strike Force and FOU, Zone A, anti-smuggling officers were all over the  place. The Strike Force  team in its operation at Oniko Village, Moro local government Area of Kwara state,  on Saturday, December 22, 2018, made 8, 413, 50Kg bags of foreign parboiled rice

In making the seizures the Strike Force Team members were said to have laid an ambush on the smugglers between Tuesday and Saturday in the Village until the Consignment fell into their waiting hand in the village. Officers and men of FOU, Zone B, Kaduna and those of Niger and Kwara Command were said to have given the Kirawa boys re-enforcement and support to ensure safe evacuation  of the rice seizures to the government  warehouse keeper in Ilorin for safe custody.

Despite the solo efforts of the Zonal Strike Force officers in making seizures across the country, the National Coordinator  confirmed that between September 19, 2018 and October, 2018, the total foreign rice seizure  made by the team, was 7,500 , 50Kg bags of foreign parboiled rice. The value of the intercepted illegally imported foreign rice was put at about 65 million. He explained that the foreign rice  bags found in one of the intercepted Containers was declared as ”raw materials at the Onne seaport, Rivers state.

Giving an insider information, he disclosed the value of the  total seizures made within one  month  was over N207 million, described as a Commendable feat by the Management.