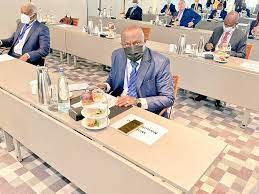 William Alo, a former Permanent Secretary, in the Federal Ministry of Power has finally assumed duties in the Police Service Commission, PSC, with a pledge to contribute his quota to move the Commission forward and ensure that the Nigeria Police Force, NPF, under the close watch of Usman, Baba Alkali, is ‘‘reinvigorated especially in the area of appointment, promotion and discipline for more effective and efficient service to the Nigerian people.

Alo, according to Ikechukwu Ani, a vetran Journalist and spokesperson of the Commission took over from Abubakar Ismaila who has been redeployed to the Ministry of Sports and Development.

Speaking during the handing over ceremony, the PSC, new Permanent Secretary, had told the Musliu Smith, a one –time Inspector General of Police, IGP, led management staff of the Commission that they need to do something different to make the police truly peoples’ friend in order’ ‘to give Nigerians a sense of security especially in this troubled times” where the Islamic Fundamentalist Group, BokoHaram and the Islamic State of the West African Province, armed wielding Bandits and other violent groups in different parts of the country are killing with the slightest provocation.

The PSC, Permanent Secretary had said he will’ ‘ensure that the staff and management of the Commission work as a team and also see to the welfare of the staff for enhanced efficiency and effectiveness’’. He noted that “the challenges before them now is how is how to move the Commission forward? Hear him: It is a small place but big in action and therefore, ‘‘we must ensure cordial working relationship with the Chairman and Members of the Commission, inculcate the spirit of integrity and zero tolerance for corruption in the service to our fatherland” he noted.

On his part, Ismaila,  the erstwhile Permanent Secretary of the Commission had called on the Staff and Management of the Commission’ ‘to extend the support and cooperation given to him to his successor whom he said is a highly experienced public officer who will deliver on his mandate’’.