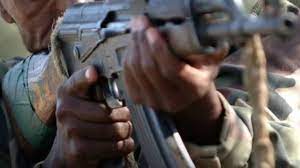 In spite of the arrest and apparent trial of Nnamdi Kanu, the acclaimed Leader of the Indigenous People of Biafra, IPOB, and the Easten Security Network, ESN, the militant wing of the Secessionist Group, who is currently in the Department Of State Security, DSS, Custody, in Abuja, the Federal Capital Territory, FCT,  Banditry  appears to be getting worse in the south east states of Abia, Anambra, Eboyi, Enugu and Imo .

This is evident with the continuous attack on Police Command s and killing of security operatives in the region over the last seven months. On Monday, August 9, gunmen, suspected to be members of the ESN, the militant Wing of IPOB,  were said to have  attacked the police Area Command, in Nnewi, the home town of late , Odmegwu Ojukwu, who had led the Biafra Secession in a30 months war with the Government of the Federal Republic of Nigeria, leading to the full deployment of the military to crush the rebellion.

The Bandits attack on the Nnewi Police Command attack in Anambra state, was coming barely four days after the attack precisely on Thursday, August, 5, 2021, at a police station at Orsu Local government Area of Imo state with Explosives. A police Inspector, according to by Abutu Yaro, the state Commissioner of Police was killed during the attack.

The suspected gunmen whohad attacked the Anambra Police Command   at Unnewi , were said to be  unhappy over the killing  of one of their gang members on Sunday, August 8, 2021,  by security operatives, believed to be Usman Alkali Baba, the Inspector General of Poilice, IGP,  men,

It was not surprising why stormed  the Police Area Command  on Monday  and engaged  the security  operatives in gun dual that was said to have lasted over an hour  forcing residents to scamper for safety. The suspected IPOB/ESN, killer gang who had stormed the Nnewi Police Command, going by Channels Television report had arrived in about seven vehicles, fully armed with the intention to sack the officers and steal their weapons. They were said t have also killed some police officers and injured many others.

Eyewitness account confirmed that the suspected gunmen overpowered the policemen found on ground at the Command, forcing them to flee, thus leaving the facility empty for the Bandits ransack and carted away with some of their weapons.  The Naval personnel around the  state  may have got a distress call from the NNewi Police Command  but  by the reinforcement  from the Navy, under the close watch of Awwal Zubairu Gambo, a Vice Admiral arrived at the  Nnewi, the scene of the gunfight, the suspected IPOB killer gang  had disappeared into thin air. The Naval personnel, who were armed to the teeth were said to have gone after them, combing the nooks and cranes of Nnewi and its environs , including  neighbouring Communities to the Anambra Industrial town and even other Local government Areas in the state  in search of them but to  no avail.

The  Value News  learnt  that when information filtered out about the attack on the Nnewi Police Command by suspected gunmen, security operatives tightened up security in Imo and Enugu, neighbouring states, to Anambra, to ensure that there is no escape  route  for the alleged Kanu’s men. This is an indications that the suspected IPOB/ESN, killer gang are still very much in the late Ojukwu home state.

The worry of many is that the attack on the Nnewi Police Command is coming barely  three months to the Independent National Electoral Commission, INEC,  INEC,  governorship election in the state. Note that the governorship is expected to hold in the state on November 6, 2021.

This may have informed why security has been tightened up in the state to ensure that the alleged IPOB/ESN, killer gangS did not disrupt the election which may be their immediate plan.  Informed sources told The Magazine that  given the tension I major towns in the state that the Bandits may strike at any time may have forced  Willie Obiano,  the state governor, and the security Chiefs in the state , including the Director of Department of State security , DSSS, in the state , to secure the state, which  the governor had repeatedly was the safest in the region.

There is no gain saying the fact that Imo, Abia and Eboyi, remain the hotspots of the Bandits attack in the south east.  Recal that last April , the IPOB/ESN, members, were said to have been instrumental in the attack in the Imo stat Police Command in Owerri, the stat Capital. They were said to have attacked the state police Command, with   General Purpose Machine guns, GPMGs, Submachine Guns, SPMGs, AK49 rifles,  , Rocked Propelled Grenadesand Improvised Explosive Devises, IEDS,  meaning that they were fully prepared to take over control of the Command, in order to embarrass , Senator Hope Uzodinma, the state governor  but that was how far they could go.

In apparent reaction to counter the activities of the IPOB/ESN, activities in the south east geopolitical region which the south east governors had described as embarrassment, they had formed Ebube Agu, security outfit. The security outfit, appears to be a toothless bull Dog as it has not made any impart in the region. Instead, the insecurity situation, in the region was getting worse on a daily basis, particular, in Imo, home state of Senator Rochas Okorocha, who has planned to build an Islamic University in Daura, home town, of President Muhammadu Buhari in order to win his support to actualse his Presidential ambition under the Platform of the App Progressive Congress, APC, IN 2023.