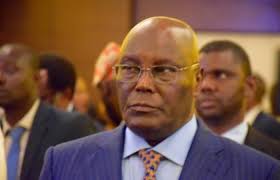 The  killing of  a British  Aid worker , Faye Mooney and her Nigerian partner,  Mathew Oguche in Kajuru Castle Resort and Holiday  centre,  in Kaduna state last Saturday , appears to have brought President Muhammadu Buhari of the ruling All Progressive Congress, APC, and Atiku Abubakar , a former Vice President and Presidential Candidate of the People’s Democratic Party together.  The duo are, according to political watchers are now speaking with one voice  that  ”impunity must end and end in earnest” in the country.

Atiku, the PDP  Candidate,  who is worried  about the continuous killing in the country by  bandits  has called on called on the Katsina  state born Nigerian President  and Nasir El Rufai,  governor of Kaduna state,  to hasten efforts to”. track   down the culprits and make them pay for their crimes” .

Given the bad image , the killings  has portrayed the country in the International Community   the Adamawa state born politician said the time for ”empty rhetoric  is long gone”, noting ”now is the time  for  urgent  national  action  to stem insecurity ”.

He stressed that ” Nigeria must once again become synonymous  with progress prosperity”.   Note that the February 23, 2019, , that produced of the ruling  APC, had polarised the   The situation was so bad as Atiku, the PDP had dragged the Independent National Electoral Commission, INEC,  APC   Buhari, to the Tribunal, insisting that he won the which the APC  flag bearer described as laughable.

The fallout was a verbal war between  the duo as the PDP , Candidate , claimed he was more qualified to rule the country than Buhari. The later , in return , challenged Atiku to present his Certificates for Nigerians to see, stating  that as a retired Army Genera, l he has attended many specialised  Courses both within and outside the country, which had qualified  him to rule  the country, including the different laurels he has won as a soldier. Earlier APC,  had accused  the PDP Candidate of being a Cameroonian , and therefore not qualified to contest the last  election, to further frustrate him.

It was therefore not very surprising  why Nigerians are very happy  that Atiku, the PDP flag bearer had  declared that the era for empty rhetoric is over  as the time    for nation building has come.

Worried about the insecurity situation in the country,   the former Vice President fears  that it may lead to ”loss of investment  opportunities as partners  who may be interested  in the growth  and development of the nation’s economy  may withdraw their funds”.

Appealing to the British government  and the United Kingdom who have much investment in the country  to know that the killing  of Mooney, an aid worker  in Kaduna state  ”do not reflect  Nigerian’s characte.

Last Easter  Sunday Bomb blast in the Asian country of Sri L by  an  Islamic extremist group  where about 300 people  were killed and several others wounded  may have forced Abubakar Sadiq,  an Air Marshall and Chief of Air Staff, to caution the troops  of the Task Force, fighting Insurgency  in the and Banditry in the   to be vigilant at all times.

”I wish  to remind  all of us  that we are still at the frontline  and  should not lose  sight of the fact  that we could come under attack  at any time ” by the Criminal elements. He   stopped short at  telling the troops  that ”they must  not allow  themselves  to be  taken unawares  but must remain alert  at all times, be undaunted and committed  to the war against insurgency and banditry in the north.

This may have forced the  Air Force , fighting troops to fully enter into the war. This is evident going by the routing  of the bandits  in their various Camps in   Zamfara state, regarded as the home of the Criminal elements. That much was confirmed  by Abdul’Aziz Yari, Chairman, Nigeria Governors Forum, NGF, and the governor of the state  at a closed door meeting   with Security Chiefs  held  on Saturday,  April 21, 2019, at Gusau, the state Capital. An elated Yari described  the air strikes  on the Bandits in their hideouts in the state as ”successful” as many of them were said to have been  forced  out from their hiding to flee the state.

Appealing  to the Air Force fighting Troops to carry out  more air strikes  in Dumburun  town in Zurmi local government Area  , regarded as the home base of the bandits in the state, he  noted that it is the only way to wipe out the last trace of the Bandits in the state.

Given the support of the people  to the security Agencies to end the Banditry in the mineral rich, Zamfara  state,  the air force fighting  troops have’  vowed  that they would not relent on their oars   ”until  the bandits who are terrorising   residents  in the north west geo-political region,  were completely eliminated”. The assurance  by the Air force Units fighting the Bandits ,  may have given the people hope that  that the Banditry in the region  may soon end in the region for life to return to normalcy.

Meanwhile, Napoleon Bali, an Air Vice Marshall, AVM, Commanding the Special Operation Command of the Air force, has appealed  to the Management  of the Umaru Musa Yar’adua International Airport, in  Katsina , not to relent in assisting  the operations of the Air Force to complete the clearance of the Bandits in the north western state of Zamfara.

Note that the earlier accused the Chiefs and Monarchs in the state of the Bandits to prolong the crisis in the , Zamfara state, because of the pecuniary gains.  But the Council of Chiefs in the not have found accusation they have threatened to address a make their position known on the matter.  the  Buhari and his Security Chiefs may be waiting to hear what the Zamfara  Chiefs would say hard on security reports had actually identified them as giving support to the bandits.