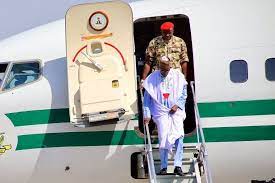 Barely two weeks after the surrender of  Musa Adamu, better known in the insurgent circles as Mala  Musa Abuja, and  Usman Adamu, popular,  Abu Darda, and  335, of their followers, including 746 members of their family , and one of  the abducted Chibok girls who had been radicalized, the insurgents appear to have renewed  their bomb explosion efforts in the north east state of Borno.

The surrender of the two Adamus, who were regarded as the Chief Bomb Manufacturer and the Deputy Chief Bomb Manufacturer, respectively, for the Islamic Fundamentalist Group of BokoHaram and Islamic State Of  the West African Province, ISWAP,, may have informed why   Abdulwahab  Adelokun Eyitayo, a Brigadier General and General officer Commanding, GOC, The 7 Division, Nigerian Army had boasted that it would weaken the Late Abubakar Shekau  Group’s  attacking capabilities but got it wrong .

Brigadier General Eyitayo, who may have acted on the instruction of Farouk Yahaya, a Lt. General and Chief of Army Staff, COAS, to receive the surendered BokoHaram and ISWAP, Bomb Manufacturers and their followers, may have carried oy proper  scrutiny of their past records or heed to the warning of Ali Ndume, a Senator of Federal Republic of Nigeria and Chairman, Senate Committee on the Army not to implement the government policy  that had  granted blanket amnesty to the insurgents instead of treating them as Criminal elements.

Indeed, the surrender of the BokoHaram and ISWAP, Bomb experts  have emboldened their followers who are still  well armed in the forest  to step up their Bombing skill in Borno  state, which had been their target over the last one decade to control it.  Note that they may  not have had  the opportunity in the recent time  of throwing   bomb at targeted  audience  in Borno state, particular, but have resorted  to drop it as children toys  at strategic locations  in the state where kids could easily pick it up.

On Thursday, August 12, 2021, five herders were said to have been killed  when a disused  Grenade bomb,  some herders  had picked and were playing with it  exploded   on a crowded bridge   linking Gamboru Community and  Fotokol  Community  in the Central African country of  Cameroon.

That much was confirmed by one Umar Kachalla, an anti-Jihadist militianman on Friday, August 13, 2021. This is an indication that the BokoHaram and ISWAP, Bomb detonators have resorted to dropping the bombs  that may have been  Manufactured by the two Adamus before their surrender to the Nigerian Army  at Bama Army Headquarters  at strategic locations,  in the various Local government Area in the state which  many believe had  caused  much damage in the state.

Even residents had said  to the hearing of security operatives in the state    that  mines and Grenades    that litter the state  , which had exploded and killed any people in the  state  , may have been given  to gullible Children  as gift to play with and throw into the bush which easily fall into the  hands of herders.

Recall that on  August 2014,  the BokoHaram Jihadists   had seized  Ngala with the nearby trading hub of Gamboru Community, which they were said to have turned as one of their own territory  during the Administration of former President Goodluck Jonathan.  The two Borno towns, were however, recaptured  in September, 2015, by the Nigerian Army, under the close watch of  Yusuf Tukur  Buratai, a Lt. General, rtd , and now a Nigerian Ambassador to the         Republic of Benin. Some other Local government Areas in the state which were said to have fallen into the waiting hands of the insurgents were also recaptured  by the Nigerian soldiers with the support  of the Chadian troops.

In a related development,  the arrest and  of Muhammeed Idris,   Commissioner For Information and Strategy,  in the  north central state of Niger and subsequent detention  in their hideout in the state by rampaging Bandits  may have sent a signal to  Abubakar Sani Bello, the governor and other security Chiefs in the state   that nobody is safe. This has confirmed  , what John Onaiyekan,  former Archibishop,of Abuja,  Catholic Diocese had said that ‘’nobody is safe in this country  because of the high level of insurgency, banditry and other forms of Criminal activities in the country’’.

Although, the Niger state Commissioner, who was arrested in his farm by Bandits had regained his Freedom around Suleija axis , a another major town in the state, on Thursday, August 12, 2021, that a disused Genade bomb picked by herders detonated and killed five of them in a Borno Community , outside Ngala Town,  idris, the Niger state Commissioner, had threatened that he would have resigned his appointment  ‘’if the government had paid the N500 million  ransom requested by the Bandits  to secure his release.

The Commissioner who was said to have spent five days in the Captivity of the abductors before his release had said that he had ‘’Committed everything in the hand of God’’.  An Appreciative Idris, who could not  hide his feelings  while narrating his Ordeal in the hands of the Criminal elements had thanked   Governor Bello,  for maintaining  the state government policy  of ‘’non-ransom payment  to Bandits’’.

Given an  insider information about his release by the Bandits who were desperate to collect ransom from the state government  to secure his release,  he disclosed that thy had a lengthy discussion, which many believed  may  have centered  on the payment of ransom. He explained  that  after the lengthy discussion  with them, he was eventually set free. He has vowed to remain resolute and not to be broken down by the recent ill- treatment, he got in the hands of the Bandits in order to stop him from further criticizing their activities in the state.

It is instructive  to note that Babangia  Damba, a one-time Councillor  of Tundunwada ward of Gusau Local government  Area of Zamfara, described as the home state of the Bandits in the north west geo-political region,  wife and the eight month  -old baby  who were  kidnapped on Wednesday, August 11, 2021,  by the Bandits at their residence in  the Damba area of Gusau, the state Capital, were  released on Friday, August 13, 2021.

The Bandits who were said to invaded the Zamfara state   ex-Councillor’s residence   were said to have shot multiple bullets at the door in order to force their way into the house to whisk  away  the nursing mother  and child. They may not have located the ex-Councillor, who was hiding somewhere in the house but the gubnshots was said to have  left him  with a bullet wound  on his left arm.

There is no gain saying the fact that a  lot has happened in the security front in the  country in the last three  weeks  that President Muhammadu Buhari, a retired  Army General   had been in the United Kingdom, UK, where he had travelled  to attend  the Global Partnership for Education, GPE, Summit,, organized  by Global  Education Summit, GES.   He was said to have also used the Opportunity of the GPE Summit,  to undergo  a scheduled  Medical check -up  with his physicians.

This may have informed why  Femi Adesina, Special Assistant to the  Katsina state born Nigerian President on Media and Publicity, had said that with his return  to the country this Saturday, August 14, 2021,  he would focus his attention  on receiving briefings from Yemi Osinbajo, the Vice President   and other top Aides  of the government  to know exactly  what had happened  during his three weeks absence.

The Presidential Media Aide may have set the ball rolling when he said  that   ‘’the tide  has turned  against the insurgents and Bandits’’, which may have gladdened the heart of the Nigerian President.