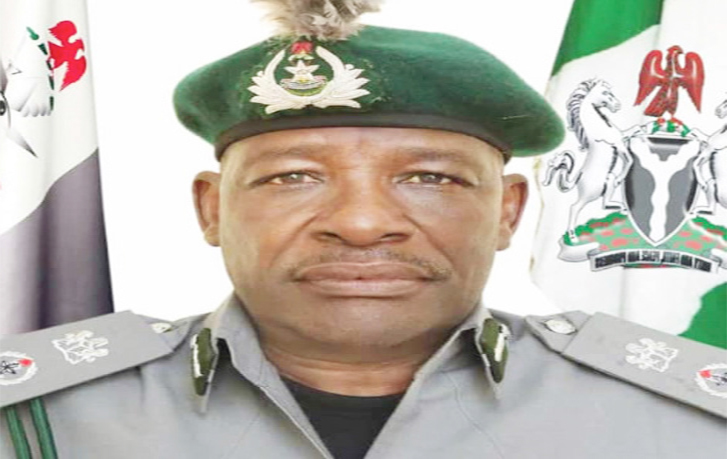 When Mohammed Aliyu, Comptroller , Federal Operations Unit, FOU, Zone, A,  established the anti-bunkering  team and stationed them at Gbaji checkpoint, along the Lagos- Seme Expressway, may have expected the team to  be  transferring  hundreds of 25 Kg , jerry cans of 25 Kg  of petrol  daily to the Government warehouse, GWH, controlled by the Command  daily .

This is because of the impression  that had been  created in the mind of people that  Nigeria was losing  millions  of naira annually to petrol  bunkerers  around the Seme, Badagry and Owode axis,  under the  Seme Command. He  has every reason to believe  so because of the too many licensed filling stations by the Department of Petroleum Resource which are cited  at the Border Communities in Ogun and Lagos state,  between Nigerian and Republic of Benin.

Note that there have been reports making the rounds in both official and unofficial circles that trucks  load of  petrol heading to these Border filling stations eventually develop K-leg  at night  despite the several  security agencies  checkpoints  including Customs Checkpoints , both approved and unapproved  along the   Border routes. The worry in mind of people was  that  these loaded trucks with products  ment for Seme and Owode axis filling stations are strictly monitored  by the security agencies personnel on the road to ensure that  it was not diverted.

In establishing  the Command anti- anti-bunkering Unit, which was a replication of what he did at Seme Command as the Area Comptrollers,  he had mandated them   to always escort  all loaded    incoming trucks  to ensure strict compliance   in discharging  the products  to the approved filling stations  in the Border Communities. They have a mandate to  scrutinise  the documents  provided by the truck drivers to avoid diversion.  but that was how far they could go.

When  The Value News visited Owode -Apa  Border axis  recently, to monitor what is happening  at the Border filling stations  but was  found  was astonishing. A truck was found discharging petrol at a filling stations at about 12 am , but by the nest day, the fuel attendants claimed  that their tanks have been exhausted by motorists plying the road.

The question on the lips of people is: vehicles Owode road daily that the entire stock within days.  by the Magazine shows that the filling stations mostly sell at night in kegs which easily carried over to the  Beninois side of the Owode Border.

The Magazine findings shows that  most of the filling station  owners in the have devised a way of smuggling the product to Republic of Benin by  connecting  a hidden hose  to their  fuel tanks from the Beninois side of the Border filling station.It is not surprising why  petrol are sold on bottles  along the Seme- Cotono or Owode to other  Beninois communities in the area.

Many had expected the Aliyu, anti-Bunkering officers  along the Border routes in Ogun and Lagos state to be making seizures of kegs of petrol daily, but it had turned out to be a job for the boys, fueling speculations that the Unit may have been created to satisfy  some interest in the Command and the Customs Headquarters. The magazine cited  some of the anti-bunkering  officers  at Gbaji Bridge competing  with the resident  and another labeled , anti-smuggling officers Unit  to  in  searching  buses and other  vehicles for smuggled foreign par boiled rice and poultry products, instead of  patrolling the  Creeks  that have  been identified over the years for smuggling of petrol into Republic of Republic .

Recall that in 2018, the combined  patrol team of Seme Command  and the FOU, Zone A,   intercepted  about 2,200 jerrycans of smuggled petrol with a Duty Paid Value of  over N10 million.  Most of the seizures, were said to have been made  at  Pashin -Yekeme Community  in Owode and the Creeks around the area.  Note that Aliyu was the Comptroller of Seme Command  while Muhammed Uba Garba, was then Comptroller of FOU, Zone A.

Many believe that  the FOU, anti- bunkering Unit,  stationed  along the  Lagos- Seme  -Owode- Apapa road may not have made any  impact in the last couple of months because the Seme Command anti-smuggling officers have taking over everywhere in the Seme and Owode  Border axis, thus , to forestall the selling of petrol in jerry cans  in filling stations,  reducing the FOU team, to toll collectors.

Eye witness account of the activities of the  Unit officers  FOU, Zone A, their counterpart at Seme including the Comptroller General of Customs, CGC.  Strike Force, Zone A, personnel,   under the close watch of  Usman a Deputy leaves much to be desired. The source disclosed officers are monitoring the  Border filling stations as to the on  Beninois side of the approach cans, mostly at