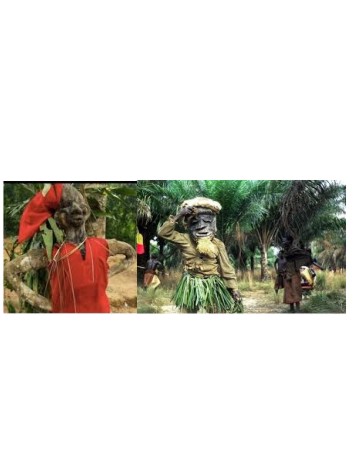 State appears to have been thrown into confusion because of the withdrawal of Oliver Obiagazie, the Chief priest  of Ntoko shrine, because of the alleged periodic involvement of the sacrifice of human blood to the shrine forcing some aggrieved Youths  of the Village to relocate to United States, Asia , US, Europe,Ghana and other countries.

The kinsmen and the elders of the Community  were said to have given him a condition for  quitting the services of the Ntoko  Shrine: produce his first son Christian Chike Obiagazie to replace him or be banished from the village. He was not ready to allow any of his male children have anything to do with the Shrine which he served  for over a decade.

Given the insistence of his kinsmen and the elders that he must be ready to produce his  first son, , Chike to replace him in servicing the Ntoko shrine, he was said to have prepared the ground for them to leave the country He got his way.

When information filtered out that his male children were  no longer in the village, the aggrieved kinsmen and  elders  of the Community were said to have a price tag of N200,000.000 on whoever would locate their whereabouts and bring them back to Ebenator Community to be initiated to serve the gods.

Investigation by The Value News  shows that no fewer than 25 other young men and women from the village whose families had links with the Ntoko Shrine , have also escaped abroad to avoid  being forced to serve the Ntoko god.

The value News learnt that  that the need to flee from the highly fetish community became unavoidable when inearly March this year, when information filtered out of plans by Obiagazie, the chief Priest of the dreaded Ntoko Shrine plans to abandon the  gods to join in bringing Salvation in the village.  He was said to have lost sense of satisfaction in serving the Deity that is evil in all its intents and purposes. Note that following intense  pressures from the villagers, the Ntoko Chief Priest and his wife whose children were said to have travelled out of the country  were said to have mysteriously disappeared from the community, a development his kinsmen said, “was a punishment from their gods for stopping mid-way to serve the Deity”.

It was also gathered that since the news of the disappearance of the Chief Priest and his wife filtered out  into the ears of the people that the entire family has jetted out to Europe,

Life has been so devastating for the young Chike who was said to have been afflicted with dangerous sickness that makes him unstable each time he remembers  his parents disappearance from home, a regular feature that was said to have stopped his school last May.

Chike was said to be constantly having mental tortures arising from the agony tormenting his family from the Ntoko gods.

The kinsmen of the promising young man who spoke to our correspondent said the only way chike could escape the troubles of the Ntoko deity and the anger of the elders of the Ebenator Community elders would be for him never step his foot on the village for the rest of his life but live permanently in Europe. There are indications that he could be killed  any time he dares the gods to come to the village  because of the stubbornness of his father in serving the gods.

“The penalty for failing to serve the Deity at its shrine is outright death, and the community must kidnap him and his other brothers anywhere they are sighted in Nigeria”, said one of Kinsmen, Igwe Edimbu.

Chike,  who is currently staying in Europe was said to have strong aversion to worshiping idol in a 21st century, a strong influence that made his father to summon the courage to quit serving the fearful Deity. He was also said to have strong passion for education, that being the reason he pressured his father to enable him travel to Europe to acquire Western education. Efforts by The Value News  to speak to him proved abortive as his parents who could have provided his link in Europe have reportedly disappeared in a mysterious circumstance.

It could be recalled that since the emigration of Chike 24 other youths from Ebenator Community to Europe, Asia, particular china,  several other youths have fled from the community to other African countries, for fear of being indiscriminately conscripted into the pool of the Ntoko Deity  worshipers. This is where Enoch Adejare Adeboye, the General Overseer, Redeemed Christian Church of God, RCCG, and other great men of God have to move into Ebenator Village in Anambra state to drive out the Ntoko gods which had been threatening the people  over the years  for  failing to serve it to restore life to the people. Until this is done, the Community would still be living in darkness in this 21st century.