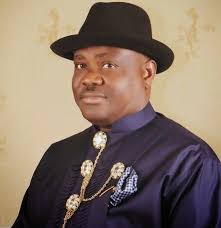 Senator Iyorchia Ayu led National Working Committee, NWC, of the Opposition People’s Democratic Party, PDP, appears to be in a state of quandary what to do with the G-5 Governors, now Integrity Group either to suspend them   over their anti-party activities or still allow them to remain in the party and continue with their  anti-party activities .

Nyensom Wike, the governor of Rivers state and he arrow-head of the G5, may have said to the hearing of the PDP, Leadership that ‘’the Group are above the threat of suspension’’.  He has even dared Senator Ayu, who has the backing of Atiku Abubakar, a former Nigerian Vice President during Former President  Olusegun Obasanjo’s Administration and the Party Presidential Candidate for the 2023, general election to try to suspend members of the  Group   and see’’ if the party would be able to withstand the storm that will follow, in the upcoming general election’’  that has been described as critical by Peter Obi, a former governor of Anambra state and the Labour Party, LP,  Presidential Candidate .

Wike, may have spoken the mind  of Seyi Makinde , Samuel Ortom, Ifeanyi Ugwuanyi, governors of Oyo, Benue , and Enugu states , including   Okezie Ikpeazu, governor of Abia,  who is battling to unmask the killers  of a Policeman  in Ndegoro Community  in the Aba Area of the state.

The former minister of state, Education, during Goodluck’s Administration, may have made the Leadership of the PP, NWC, to understand that ‘’the battle line has been fully drawn’’ and that ‘’they will do everything legally possible to challenge any decision that might be taken against tem’’ considered illegal.

Many had expected the Senator Ayu led Executive Council of the PDP that had suspended Senator himaroke Nnamani, a former governor of Enugu state and an arch supporter of Aswaju Ahmed Bola Tinubu, a former governor of Lagos state and the ruling All Progressive Congress, APC, Presidential Candidate for the 2023, elections,   over allegations of anti-party activities to extend the same punishment to the G- 5, who are still talking tough.

Recall that on January 20, 2023, the PDP Leadership, also had suspended Chris Ogbu, a chieftain of the party from Imo state and some other members of the party from Ekiti state over alleged anti-party activities.

The PDP Leadership may have sent a message to Ayo Fayose, a former governor of the state, allegedly hobnobbing with Wike, the arrow-head of the G-5, that he can also be kicked out from the party with the dissolution of the state Executive Committee and the setting up of a Caretaker Committee for a period of three months.

The G-5 arrow-head may have hired the Ekiti state dissolved Executive Council case, describing it as an ‘’act of tyranny’’ by Senator Ayu, embattled National Chairman of the PDP, stressing that ‘’it will be challenged in the Court of Law’’.  He had aid that Senator Ayu and his Team, resort to tyranny would do more damage ‘’ to the PDP, as far as the coming general election is concerned’’.

Indeed, the Rivers state  governor  may not  have hidden his hidden  his support  for Obi, the LP, Flag bearer, whom he has continued to extol   his sterling Leadership qualities, urging him ‘’to continue preaching for the unity of the country ‘’. He has pledged to furnish  the Presidential Candidate of the LP, Obi,  with ‘’all logistics  supports  needed for  his Campaign  in the Rivers state’’.

Wike may have shown that the G5, have the capacity to pay the PDP  Leadership back  during the flag-off  Campaign   of the party governorship Candidate  in Bori, Headquarters  of Khana  Local government government Area in the state  on Saturday, January, 21, 2023.

He has urged  the electorate   in the Khana Local government Area  ‘’to vote  foriminialayi Fubara, the PDP, governorship Candidate in the state as well all  the national   and state Legislative  Candidates  for the 2023, general election but failed to woo the electorates to vote for Atiku, the party Presidential Candidate.

Political analysts believe that Wike could engage in anti-party activities while still a card carrying member of the PDP, because he sees himself as an asset in the party.  This is because when the likes of Atiku, the party Presidential Flag bearer, Senator Bukola Saraki, a former Senate President, and several other Chieftains of the party  abandoned it and joined the APC, in 2015, he remained ‘’ to bankroll  the activities of the party’’ with the lean resources of the state.

He was said to have obtained a loan from an undisclosed Consortium of Banks, running into hundreds of millions of naira. He was said to have used a lion share of the loan to run the party, forcing the then party Leadership to move the party retreat which was initially slated for Akwa Ibom state to hold in the state.

David Mark, a former Senate President was so impressed with  his support for the party  that he has declared  that the oil-rich state has now become the  Headquarters of the PDP with Wike as ‘’the face of the Opposition party’’.

He may not have also forgiven   Atiku, the PDP, Presidential Flag bearer  over what he did to former President Jonathan in 2015,  when he travelled to  the Dorchester Hotel  in London, United Kindon,  UK,  to meet  the Adamawa state born politcian  to beg for his support but  was asked  to relinquished the PDP  ticket  to him.

This may have informed why people see what is currently happening in the PDP, between the G5 and Atiku and the PDP, leadership as pay- back time.  But Former President Jonthan had repeatedly denied any involvement in the crisis rocking the PDP but Atiku and his cohorts would not take it.

Notwithstanding the internal rivalry   between and Atiku and  Wike,  the later may have proved that he is still a loyal party member,   as he was said to have approved  the use  of Adokye Aesiamaka Stadium, at Igwurita-Ali, PortHarcourt , for the Presidential Campaign rally  to the PDP Candidate, at ‘’no cost’’, despite the initial threat  to cancel the approval granted to the  party because of the disagreement  with Abiye Sekibo,  a former minister of Transportation  and the state Director General  of the party  Presidential Campaign Council, PCC.