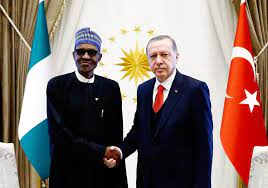 When Samuel Ortom, a former minister of State, Industry, Trade and Investment during the Administration of former President Goodluck Jonathan, and now governor of Benue state,  told the Nasarawa state Traditional Rulers who had paid him a Condolence visit following the death of Elias Ikoyi Obekpa, Ochi Idoma,  that Nigeria is under Invasion by Fulanis from  Foreign countries, not many people took him serious.

Recep Tayyip Erdogan, President of the European country of Turkey,who had paid a State visit to Muhammadu Buhari, a retired army General and his Nigerian Counterpart, recently  may have given a hint to him why banditry  in the north western states of Zamfara, described as home of the bandits, Kaduna, Katsina, Buhari home state, Sokoto, Kebbi and Niger, the home state of Ibrahim  Babangida, a retired army General and former military President is getting worse.

Erdogan had said that members of the notorious Fetullah Terrorist Organisation, FETO, that had attempted to push him out of power on July 16, 2016, through a failed Coup are currently in Nigeria, meaning that the bandits are terrorists.

.He may not have said categorically that the members of the FETO Group are backing the north western geopolitical region terrorists who are operating as bandits to distabilise the region but it is obvious that they are Collaborating with them going by the sophisticated weapons being used by them in their various attacks in different parts of the north west and the north central geopolitical regions.

The Turkish President  may have given the Nigerian security and Intelligence agencies a clue  about the activities of the bandits  when he revealed that Turkey  has been fighting  against the sterrorist Organisations  such as  the PKKK, PYD, Dash, which were said to be working closely  with the FETO Group, whose members have relocated to Nigeria The bandits may been trained by them in their respective Camps on  Weapons handling by the FETO mbers.  Ibrahim Dosara, the Zamfara state Commissioner for Information , had said that there  are over 100 bandits Camp scattered all over the state with 32,000 arms wielding followers which may have informed why the FETO members could mix easily with them and be able to Launch attacks on their targets.

It was not surprising why the Turkish President has sought ‘’the Collaboration of the Nigerian government to overcome extremism and terrorism that has become a global phenomenon’’. The two Leaders had signed eight major agreements and Memorandun of Understanding s, MoU, on Energy, Defense, Mining and Hydrocarbons.

Erdogan’s revelations  may have informed why the Katsina state born Nigerian President met with Lucky Irabor, an army General and Chief of Defense Staff, CDS, and  the service Chiefs including Heads of Intelligence agencies and Yemi Osinbajo, the Vice , President, on  Thursday, October 21, 2021, to restrategise.

Given the importance attached to the security meeting, Boss Mustapha , Secretary to the government of the Federation,  Bashir Magashi, minister of Defece , Ali Munguno, National Security Adviser, NSA, both retired Major Generals and Abubakar Malami, a Senior Advocate of Nigeria, SAN, who incidentally is the country’s Attorney General and minister of Justice were present.

The Turkish terrorists, Collaborating with the Local bandits or gunmen as they were called in some places, may haveknown that the game is up with President Erdogan, visit to the retired army General, that they became more destructive .

This  is evident with their attack under cover on Wednesday, October, 20, 2021,  of the Nigerian Railway Corporation, NRC,  Kaduna –Abuja scheduled  Train. They were said to have planted explosives that damaged the rail track and shattered  the windshield  of the train engine. They were said to have also opened fire , targeting the driver and the tank.

An eyewitness account disclosed that the attack had occurred   between Dutse and Rijana stations but the drive struggled to move towards Kaduna Rigasa station. The source, who was on board the train had said that it almost skidded off its path when they miraculously escaped.

The incident may have encouraged Okhiria, an Engineer and the NRC, Managing Director, to give a matching order that all Kaduna and Abuja train operations be suspended on Thursday, October, 21, 2021, until’’ the issue is properly addressed’’  to avoid a repeat in the future.

However, Okhiria, the NRC, Chief Executive Officer, CEO, had assured the travelling public that there was no cause for alarm , as the explosives  planted by the unknown gunmen  on the Kaduna-Abuja  railway  on Wednesday night have been ‘’detonated . He’’ , but noted that  ‘’the explosives  damaged the rail tracks aound  Dutse and Rijana in Kaduna state’’.

Given the approach adopted by the  armed wielding bandits in Launching their attacks at targets which was not different from the method  used  by the Islamic Fundamentalist Group , BokoHaram and the Islamic State of West African Province, ISWAP, may have informed why Nasir El-Rufai, a former minister  of the Federal Capital  Territory , FCT, during Olusegun Obasanjo Administration, and now governor of Kaduna state joined other well-meaning Nigerians  to call on Buhari  to declare ‘’the bandits  threatening the peace of the people of the  north western  geopoliticalregion as terrorists’’.

The Kaduna state  governor who may have read the hand writing on the wall  of the dangers ahead,  had said  that declaring  the bandits as terrorists  will  enable  the Force and the military  ‘’to utterly decimate them  without fear of being sanctioned by the International Community’’.

El-Rufai, may have shocked Nigerians   when he opened up  that the Kaduna state government  had written  several letters  to the  office of the Commander –In-Chief  of the Nigerian Armed Forces, C-In-C,  since 2017,  ‘’asking for his declaration  of the bandits as terrorists’’.  He may have taken the bold initiative because of his beleieves that the declaration will allow  ‘’the Nigerian military  to attack  and kill the  bandits  without any major consequences  in the International Law’’.

Recall that the Ahmad Lawan, and Femi Gbajabiamila,  led Senate and House of Representaives , respectively,  had asked the Nigerian President,  ‘’as a matter of urgency  to declare the arm wielding bandits  operating in  different parts of the north western and north  central geo-political regions  as terrorists and wage a total war on them.

The Lawmakers were said to have also urged the President ‘’to declare all known Leadership of the bandits wanted , track them  wherever  they are for  arrest and prosecution’’. They may have shown their seriousness to end banditry in the north west and north central states when they asked him ‘’to order the military  to eliminate  the bandits  by bombing their hideouts’’ . That was how far they could go.

An aggrieved El-Rufai, w ho is not happy that 888 people were killed by the bandits in the state within nine months, based on reports,  has taken a stand: We support  the resolution  of the National Assembly and we  are going to follow up with a letter of support  for the Federal government  to declare the bandits  as terrorists so that there  will a fair game for the military.