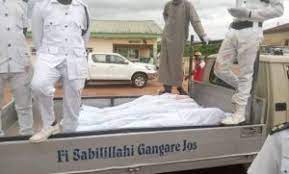 There have been a conflicting reports on the number of people killed in the recent attacks in Bassa and Riyom Local government Areas, described as hotspotbed of crisis in the north central state of Plateau state.  The victims who were  travelling from Buchi enroute Jos to Ikare  in Ondo state were said to have been  ambushed and attacked  along Rukuba Road, in Jos, amidst wide condemnation from both religious-divide throughout the country, including President Muhammadu Buhari, a retired Army General.

Edward Egbuka,  the Plateau state Commissioner of Police,   based on report  from his men deployed to Gada-Abiyu along  the Jos-Zaria road  in Jos  North Local government  Area on Saturday, the scene of the attack , on Saturday, August 8, 2021, had said on Monday, August 10, 2021,  that 17  people were killed while another report has it that 23 people killed were during the  attack by the suspected gunmen. Note that the  initial figure released as the number of number that were killed by the gunmen  along the Rukuba road  in the Jos  North Local government  Area were  25 persons

The north central state of Plateau, Commissioner of Police may have   painted side of the attack when disclosed that 85 buildings were raised down but the Leadership of the Iregwe Development Association, IDA, has contradicted him  byclaiming that 250 houses were burnt. The houses were said to have been burnt in  Zanrwa, Nche-Tahu, Rikwe-Rishe A and B, Ri-Dogo, Nchu-Nzhwa , all in Jebu-Miango  Communities of Miango Chiefdom .

. The Army have stepped into  the crisis  in the  All Progressive Congress, APC, controlled state to restore normalcy .  Indeed, Troops  of Operation Safe Haven , a military Task Force  set up to restore peace in the Late Solomon Lar, home state  were said to  have arrested 12 persons  in connection with the attack along the Rukuba road of Jos.

That much was confirmed by Ishiaku Takwa, a Major, in the Nigerian Amy and spokesperson of the Operation Safe Haven in the state. The  soldiers may have acted swiftly  to make the arrests as Samuel Lalong, the state  governor was said to have read the ‘’riot  act’’, to the military Task Force,  to move out  and ensure that within the next  two weeks  all those  who had perpetrated  the attacks were brought to book.  The governor was said to the soldiers andother security operatives in the state that ‘’this could be done’’.

He may have known that   the security operatives could fish out the Criminal elements if they want to do their work. This may have informed  why he had said that ‘’this could be done’’.  The soldiersSpecial Report and  the other security agencies may have known that they cannot afford to fail ,the  Lalong, the Plateau governor,  has the ears of the Katsina state bon Nigerian President.

Lalong, the APC, governor of  Plateau state , who is not happy that there are people in the state who are out to turn the  it into another north west geo-political  region state of Zamfara, described as home state of Bandits, Kaduna, Katsina, the President home state, including the north central states of Niger, former  military President Ibrahim  Babangida, a retired Army General and Benue, another north central state.

The aggrieved Plateau state governor who do not want the Rukuba attack  to repeat itself  in the state in the future was said to have  asked residents ‘’to monitor  strange  persons among them and hold such persons accountable in a bid to curb  the infiltration  of Criminals into the state’’.  He was said to have also declared a curfew in three Local government Areas of the state: Jos North,  Jos South and Bassa, as a prelude to ending the attack   in the affected Local government Areas.

Recall that  between July 30, 2021 and August 2, 2021,  herdsmen had attacked   some Communities ,  in Miango, Irigwe Chiefdom  in Bassa Local Government Area. The attack was said to resulted in the death of five persons  and several others seriously injured in the Area.

Also, last April, eight persons were attacked  and killed in a mining site in Kuru,  where the Nigerian Institute of Policy and Strategic Studies was  located in Jos. The Kuru minind site atatck may have sent  a signal  to the people that the state is gradually slipping back to  what it used to be known over the last two decades: a crisis ridden. The situation was so bad in the state that former President Olusegun Obasanjo, in 2004, dissolved  the Plateau state House of Assembly  and appointed Chris Ali, a retired Army General, to take over the mantle of Leadership in the state from  Joshua Dariye, over alleged incompetence, to stem the persistent Communal  clash in the state.

But Buhari, the Nigerian  President  may  not seen  the declaration of  a state of Emergency as   the best approach in addressing  the high level of  insecurity in the volatile states, which are mostly  APC, controlled states as it would affect its political fortunes in the  2023, general elections.

This is  it would amount to  appointing Sole Aministrators to take over  from  Nasir –El rufai, governor of Kaduna state  who was said to have  been flown to the United Kingdom, UK, on a Medical  -checkup, B Abubakar Sani  Bello Niger, Lalong, Plateau,  Bello Matawalle, Zamfara, Hope Uzodinma , Imo and  Aminu Massari, a former Speaker of House of Representatives and now governor of Katsina state.

He may have also found it necessary  Samuel  Ortom, governor of Benue state,  who had  at  different times  described him as’’ the President of The Fulani and not the President of Nigeria’’.This may have informed he has resorted to condemning such attacks and killings by suspected gunmen in any of the states whenever it occurs. It is not surprising when he joined other Nigerians to condemn the attack on travellers  along the  Rukuba  Road  in Jos North Local government Area of Plateau state last Saturday.

Shehu Garba, Senior Special Assistant to the Nigerian President on Media and Publicity , who had issued a Statement , at the instance of the President ,  had described the attack as ‘’brazen and wickedly’’.  He was said to have  ordered  the security agencies  to fish out  the perpetrators of the Jos attack and bring them to justice as a lesson to others who might want to carry out such attack in the future.

The retired Army General had said  that   Plateau is ‘’one of  the states  affected  by farmer-herder  clashes’’ , which  have been curtailed in the recent time   following  intense  peace-building efforts  of Lalong, the state governor.

He maintains that the recent attack   in the north central state  state is not  ‘’an agriculturalist and pastoralist confrontation but  rather  a direct , brazen and wickedly motivated attack on members of a Community’’.  According to him, with the evident preparedness  of the attackers , ‘’it is clear   that it was well- conceived and prearranged  assault  on a known target, location and religious persuasion  of the travelers  not an opportunists ambush’’.

Buhari, who could not hide his feelings   had told those that cares to listen  that ‘’these kinds of  attacks  on the  country’s Citizens  are unacceptable, heinous  and in Complete Contradiction  to the  Christianity and Muslim Teachings, the two great Religions  o of the country. He gave kudos to Governor  Lalong  and Sa’ad Abubakar III, a retired Brigadier General  and Sultan of Sokoto, as well as  Skeikh  Dahiry Bauchi,  including other   notable Christian and Muslim Leaders in the Tin state  for their effort ‘’ to calm down  the situation’’.

Rotimi Akeredolu, a Lawyer and governor of the south west state of  Ondo, may have known that there is trouble ahead over the Jos killing that  he has called for calm. Appealing to the residents of the state not to take the Laws into their hands   over the attack  on the indigenes  of the state state  at  Rukuba village  to avoid escalating the crisis,  he stressed  that the situation is under control as security has been tightened up in the state.

While the dust generated in the Jos North, and South, including  Bassa , Local government crisis is yet to settle,  the Bandits were said to have struck in the north western states of  Kaduna and Sokoto agin. Thy were said to have  killed an undisclosed   number  of farmers  who were abducted  in Buruku and Udaw   Communities in Chikun  Local government Area of Kaduna state.

The victims who were said to have been  slaughtered by the Bandits were kidnapped over a month ago. The villagers may have known that the abducted farmers have been killed when the bodies of some the victims were recovered on Saturday, August, 14, 2021. Jalige, a resident of one of  the Communities had confirmed  that at least eight farmers were  killed.  The affected Communities, located along the Kaduna-Birni Gwari Road, according to informed sources have been  a hotbed  of Banditry and  kidnapping for ranson  in Chikun Local government Area of the state over the last six years.

In Sokoto, home state of Late President Aliyu Shehu Shagari, the Bandits were said to have killed nine persons  in an attack at  Bejingo,  Dantudu, and Tulutu , villages in Brjin  Ward, Goronyo, a riverine Local government  Area of the  Caliphate state on Saturday, that eight abducted and killed  farmers bodies  were recovered in Kaduna state.

The Bandits who had attacked  the Goronyo  Local government  Area ,  villages, were said to have raided  the  houses  to bring out the victims who were killed. The Bandits, who were  said  to be wielding sophisticated weapons  and equally blocked   the Road  leading to Sokoto city,  before  Launching the attack to avoid military  counter-offensive. Note that the Bandits had kidnapped 60 travellers  along the Sokoto-Gusau highway last July.   Even, last May, the gunmen had killed 12 people in Ilella Amarawa , Ilella Local government Area of the state.

The most recent is the attack on the a Police Station in the region  was  at Oguta Local government Area of Imo, Senator Rochas Okorocha, home state. Michael Abattam, a Superintendent of Police, and the Imo state state Police Command spokesperson, had confirmed that  two policemen  and three gunmen  lost their lives in the Friday, August 13, 2021, attack.

The Imo state Police Command spokesperson believes that the suspected assailants would be arrested  if the people of the state,  particular, residents   of Izombe Community, where the Police Station is located, are ready to volunteer information   to assist the policenmen do their work.

Even Hospitals in the Community  where the attack was carried oout were said to have  been asked  ‘’to report anyone  with bullet wounds seeking for attention  in their Hospitals for immediate arrest and  questioning.