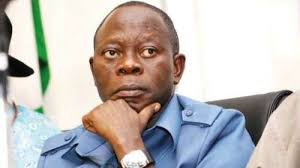 Barely two months to the 2019 general elections, President Muhammadu Buhari and Adams Oshiomhole, a former governor of Edo state and National Chairman of All Progressive Congress, APC, appear to have turned their back at Rochas Okrocha, Ibikunle Amosun and Yari, governors of Imo, Ogun and  Zamfara states.

Buhari who could no longer take it from the governors  was said to have warned Amosun,the governor of Ogun  state and one of his closest ally in the party to watch his steps and comments.  The President’s worry  was the defection of Adekunle Akinlade, the state Commissioner of Information and Strategy to APM, with the support of Amosun to pick the governorship ticket of the party ,thus depleting the ranks of APC in the state as his  followers were said to have joined him in the new party.

The Edo state National Chairman of the APC  may have been armed with the president’s scolding of the Ogun state governor send a signal to Okrocha, that his on the Imo state Chapter of the party and turning the state into a back and is over.

His pronounced anger against Okrocha,  the Imo state governor may have been informed by the refusal of the governor to allow Uzodinmma, the party governorship Candidate  gain acess to the state Stadium to flag -off his 2019 governorship Campaign in the sate even when he had  paid to use it .

The APC governorship Candidate, may not  have shown any anger over plans by Okrocha to sabotage his  flag -off Campaign as he was said to have moved with his supporters to another location . Oshiomhole who could not hide his anger said with the election of Uzodinma as the next governor of Imo state,” it will mark the end of Okrocha’s familiocracy in the state”.

In a voice laden with emotion at the campaign rally on friday, December 21, 2018,  he had said, ”  we have not come here  to cry over what has gone wrong in the state over the last three and half years but to send a message of liberation ”of the people of the state from Okrocha’s stronghold . The aggrieved Imo state governor who may have shunned the APC  governorship Candidate flag-off campaign because Uche Nwosu, the son-in-law, was denied the ticket was said to have occupied himself with other matters in the state House to avoid coming into contact with Oshiomhole and Uzodinma.

Daniel Nwafor, former state party Chairman  in  Imo state and strong ally of Okrocha had described Oshiomhole,  as a” ‘, for dissolving the state party executive with the active connivance of Uzodinma, the party governorship the state.

According to him, the Oshiomhole  led National Executive  had bowed to pressure from the Uzodinma who had repeatedly complained that he would not  win the 2019 governorship  elections in the state with the present  party structure controlled by Okrocha, the state governor, seen by many as working against his success in the 2019 election. Nwafor  lamented thatUzodinma, has hijacked the party machinery which would take the” APC 15 steps backwards in the state.

There is no gains saying the fact that Okrocha, Nwafor and Nwosu, and their supporters are determined to prove to Oshiomhole and Uzodinma, the APC governorship Candidate that  they  hold the key and knew the formulae of winning the state governorship elections back but would not release it to the party interim   state executive to implement to ensure Uzodinma’s victory in the 2019 governorship elections.   Indeed,  Nwafor, Okrocha and other APC Chieftains in the state  who are aggrieved with Oshiomhole were said to be working behind the scene  to ensure that   the APC  governorship Candidate lose the election.

The Value news that Buhari had made several attempts to calm the aggrieved governors by inviting them at different times to the Presidential Villa for meeting, appealing to them to work for the victory of the party governorship Candidates in their respective states.That was how far Buhari could go. The governors still maintained their stand to fight Oshiomhole , the party  National Chairman, with the last drop of their blood to prove that they are indispensable and could determine who becomes the governors of their respective states.

Many believe that it would be a miracle if APC could  still win Ogun, Imo or Zamfara states, in next year’s elections because of the crisis that had rocked the state Chapters of the party between August and  now.

The refusal of the former  party executives in Ogun, Imo and Zamfara  to Cooperate with Oshiomhole to  bring the crisis in the party to an end because of the strong grip of the governors may have facilitated the dissolution of these states Chapter  Executive   to  ensure a , Campaign of the governorship Candidates in these ”APC states of Confusion”, a party Chieftain said.