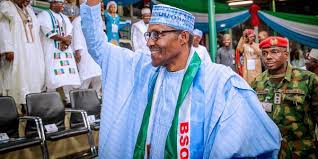 For the past two weeks,  there have been rumours making the rounds that President Muhammadu Buhari, the All Progressive Congress, Presidential Candidate, seeking re-election in the 2019, general elections  appears unprepared to flag off the much talked about Presidential Campaigns in Akwa Ibom state, South south Nigeria. This is because of his alleged health challenge and unresolved allegations of being controlled by a cabal in the Presidency.

The argument of the critics was that he might not be able to stand the rigours of the Campaign and  the claims that Ahmeed Bola Tinubu, a former governor of Lagos state  and the APC National leader who was alleged to have  rejected the appointment to head the Buhari Presidential Campaign Organisation might be conspicuously absent on the Campaign ground .

Unknown to many , the APC, Presidential Candidate may not have been in a hurry to jump into  the Campaigns proper  as his foot soldiers had been sent out to gauge the mood of Nigerians  and their thinking about the ruling APC government.

Buhari may have proved bookers wrong when he appointed Tinubu, the party National leader, the Co-Chairman of his Presidential Campaign Organisation and he accepted it with a promise to work for the victory of the party in 2019  general elections.   His acceptance of the position may have given the APC Presidential Confidence to kick start his Campaigns  on Friday, December 28, 2018, in Uyo,  Capital of Akwa Ibom state.

There was the initial fear that  Emmanuel Udom, the People’s Democratic  party, PDP,governor of the state may not grant the request of Godswill Akpabio,  a former governor of the state and the south south Coordinator of the Buhari  Presidential Campaign Organisation to use the state stadium for the party presidential Flag off Campaigns because of their frosty relationships .  Udom was said to have obliged Akpabio his request without hesitation.

Given the governor’s approval,Akpabio was said to prepared the ground to receive the APC Presidential candidate  and his entourage in the state. The Value News learnt that as at Thursday, December 27, 2019,  virtually all the hotels in Uyo , and its environs had been fully booked by party supporters awaiting the arrival of Buhari and his team. The Stadium , according to a source  was also given a facelift .

Residents told The Value News that as at  9 am on Friday, December 28, 2018, the stadium was filled to capacity awaiting the arrival of the President and his  Campaign entourage. The arrival of the Buhari Campaign train was said to have electrified the stadium as people struggled to catch a glimpse of him because of the rumours making the rounds over his failing health. They were surprised to find a man who was” as strong as the fiddle” and who could stand his ground preaching the gospel of APC to the people.

Many had expected the APC Presidential Candidate to give a message of hope to calm the people who were already fed up with the belt tightening  policyof the Administration. Instead, he had told them during the Campaigns to be ready to ”sweat and work for a living”, as the era of party patronage and handouts” from government was over.

He was said to have made it clear to the people who had thronged out from different parts of the country to listen to him that his Administration will stop at nothing to fight Corruption, adding” we will continue to prosecute those who  found guilty”. He assured Nigerians who had trooped out in their thousands to the Akwa Ibom state stadium to listen to the APC gospel, that the money recovered in the anti-Corruption war  would be sent to the Federation Account for execution of projects across the six geo-political regions .

He recalled that as a  military Head of State between  December 31, 1983 – August 25, 1985, he had arrested  from the then late President Shehu Shagari, late Vice President Alex Ekwueme, , governors and ministers and forced them  to cough out the money they had stolen from the government treasury or go to jail. The  trial tribunal Chairmen were said to have handed over laughable jail sentences to the arrested and detained politicians both at the state and national level.

He alluded  that Ibrahim Babangida, a retired Army General and former military President equally meted same treatment to him in 1985.  ”I was arrested and detained ”him”

The detention may have toughened  him to continue the anti-graft war as an elected President in 2015. ” So when I came in Agbada on May 29, 2915,  I refused to follow what the system had accepted and decided that those who are corrupt  will be investigated  and prosecuted and we havenot stopped”.

The President who had received more knocks  over his handling of the security situation in the country, was said have promised to provide more ”security for Nigerians”. He disclosed at the Campaign ground that the insecurity situation in the country, particular, the north east has drastically reduced as the BokoHaram insurgents are no longer in control  of any local government in the region.

The APC Presidential Candidate who is seeking re-election in the 2019 election, noted that  as at the time he mounted the saddle of leadership in the country in 2015, the insurgents  were holding  about 17 local governments in Borno and Yobe states. ”They are not holding  any local government for now”, he had said.  This may have given him the impression that the” civil war  in north east had been won” , which security analysts said may not be true. This is because of the on -going battle for control of the Baga fishing town in Kukawa local government of Borno state between the terrorists and the Multi- National National Joint Task Force, MNJTF, soldiers.

Buhari, who could not hide his feelings claimed he has fulfilled his 2015 electioneering Campaign promises of going to tackle three fundamental issues: security, economy and fighting corruption to the people. He noted that with the support which the government had given to farmers over the last three and half years, the” nation has achieved food security” and promised to sustain the tempo if re-elected in next year’s Presidential election.

When it was the turn of Tinubu, popular, Jagaban , to speak, he declared:  we are strongly determined  to rechain  the coal  and redirect  the vessel of governance  in this country, noting that the ”PDP  looted the nation’s  resources  throughout its sixteen years rule”.

According to him,” they  ruled sixteen years and gave Nigeria sixteen years of darkness” ”if only a PDP government had concentrated  on electricity  alone without  which there would be no industrialisation ”, the country would have been better off for it”, he  had further sai.

He promised that Buari will take the country to the next level of development if re-elected in 2019 to continue his good work which he has already started. The former Lagos sate governor also promised that the country  would experience economic prosperity in the second coming of the Katsina state born President in 2019 as corruption would be fought to a standstill.

Appealing toNigerians , ” vote for your future and not for a bunch of corrupt politicians  in the PDP” who would loot the treasury .  Whether Nigerians would listen to the appeal of Tinubu, the former Lagos state governor remain to be seen. This is because of the anger in the land: hunger and suffering.

Uche Secondus, National Chairman of the PDP , had made Nigerians to know that corruption has become worse in the country than under the PDP which had had been vilified by ruling APC government. Secondus noted that Buhari was surrounded by corrupt political appointees.

He  had challenged Buhari to bring to book some of his political appointees including ministers who had been fingered as having enriched themselves while in government  if he was sincere with his anti-graft war.  The PDP National Chairman who described the APC government as ”deceptive”, said there is nothing good to celebrate abot about Buhari and his government.