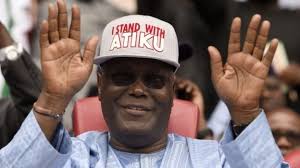 The rank  of people supporting Atiku Abubakar, a former  Vice President and Presidential Candidate of the People’s Democratic party, PDP, appears to be increasing by the day. This time around, Strategic stakeholders in the nation’s maritime and allied industries were said to have converged under the aegis of the” Committee of Maritime and Allied Industries Stakeholders for Atiku Abubakar” (CMAISAA) to muster  him in the 2019 general elections.
At the last count over five thousand maritime  stakeholders and the allied industries have joined the group.  At  one of the meeting of the group  on Saturday, October 20, 2018, at Apapa, Lagos ,South-West Nigeria, they were said to have unanimously endorsed  Atiku, the PDP Candidate  and volunteered to work for him to ensure that he defeats president Muhammadu Buhari of the ruling All progressive Congress, APC , in the 2019 election.
A Statement, jointly signed by Obiajulu Agu and Ari Ayuba,  CMAISAA  jusitified its support for  the PDP Presidential Candidate to his leading role in the nation’s ”oil and maritime sectors as an employer of labour”. The group is optimistic that given his level  of acceptance across the six geo-political  regions of the country , he would  ascend to the country’s highest elective political office in the  2019 Presidential election.

Atiku is not only one of our own but adequately equipped to  fix the nation’s battered economy  by Buhari of the ruling APC,  Recall that the PDP presidential Candidated had  started his  carrer in the Civil Service where he retired as a Director of  the Nigeria Customs Service (NCS),  to start a business with late General. Shehu Musa Yar’ ADdua. The duo were said to have formed INTEL,  an Oil Service Company,  deeply involved in the nation’s  maritime sector , which had employed  millions of people.

Indeed, while, the Buhari’s led government was still struggling to the minimum wage  agreed with the Nigeria Labour Congrss, NLC, INTEL, on the instruction of Atiku and other Board members company  have started paying its approved minimum wage wage for the workers which was said to be be over N30,000.00 per month, an indication that if given the opportunity to rule the country , Nigerian workers would be happy.
CMAISAA noted that Atiku over the years, has consistently made bold interventions to uplift service delivery in the multifaceted maritime and allied industries,  which had greatly impacted on the nation’s economy positively.It was therefore not surprising , while the Committe for Maritime and Allied Industries are supporting Atiku inorder to bring his wealth of experience in  the nation’s private sector into governance.
Many believe that with his sterling track record in business, it  would easy  for the country to attain the” economic growth  that  had eluded it over the years”. The 2019 polls, according to CMAISAA,  thus offers the Nigerian electorate a golden opportunity to vote for  Atiku, who is imbued with the rare combination of being a” true nationalist and an internationalist”, blending comfortably in both urban or rural settings for impactful positive goals wherever he goes.
Inspite of the fact, CMAIAA and other groups ,have thrown their weight on Atiku, the PDP, Presidential Candidate, Ango Abdullahi, a former Vice Chancellor of University of Zaria and Chairman of Northern EElders Forum, NEF and founding of the Arewa Consultative Forum, ACF , appears to have joined the ranks supporting Atiku Presidency. Abdullhi reportedly had called  the ACF  members supporting Buhari re-election bid as”touts and job seekers. He may not have spoken the mind of the north socio – cultural and political Organistaion as the group  may have replied himhad replied him, ”You’ar on your own, an indication that they are still solidly behind Buhari, the APC, Presidential Candidate.