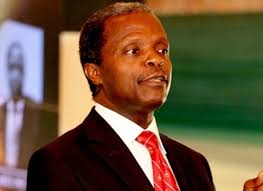 The Nigeria Election Debate Group, NEDG, and the Broadcasting Organisation of Nigeria, BON, appear, to have set the stage for the grand Presidential debate, ahead of the 2019 general elections. NEDG and BON, may have copied this from the United States, US, where debates are organised  for the  Democrats and Republican  Presidential and Vice Presidential Candidates including the Independent Candidates ahead of any Presidential elections in every four years. The performance of the two dominant party Candidates in the debate gives the direction of electors of the US President in the electoral college.

The Vice presidential debate had started on Friday, December, 14, 2018,with five of the Candidates showing appearance. The Candidates who had shown up may have seen the debate  was an opportunity to sell their presidential Candidates and the party manifestoes to the electorate.

Many had expected NEDG and BON, to postpone the debate, given the low turnout of the Vice Presidential Candidates but they kept to the schedule to avoid been labelled as an unserious group. The Value News learnt that even if only two of the Vice presidential Candidates  had turned up for the debate, the NEDG and BON, could still have gone ahead to conduct it and allow the public to judge.

The Independent National Electoral Commission, INEC, was said to have registered  91 political parties for the 2019 general elections. About 73 of the parties were said to have presented Presidential and Vice Presidential Candidates for the election. Based on the number of parties with confirmed Candidates for the 2019 election, many had expected that the BON  studio where the debate was held to be filled up but this is not to be, fueling speculations that Nigerian politicians have not really come to terms with the importance of such debates as it could sway votes to their side if they could convince the electorate that they could deliver on their manifestoes if given the opportunity to rule the country.

Only five Vice Presidential Candidates  were said to have honoured  the NEDG and BON, invitation to attend the debate at the BON studio at Abuja. They are Yemi Osinbajo, of APC,  Peter Obi, PDP,  Ganiyu Galadima, Allied Congress Party of Nigeria, ACPN, Khadijah Abdullahi-IIya, Alliance For New Nigeria, ANN and Umma Getso of the Young Progressive Party,  YPP.

Perhaps to avoid turning the BON studio into a Campaign ground where party supporters in the studio would be cheering  or jeering Candidates who may not impress them in the presentation of their party programme, the organisers were said to have placed a standing rule: NO  cheering or jeering of any Candidate who has the floor to speak.  The NEDG and BON  Coordinator, was said to have threatened to use  force to bundle any person who contravenes the set rule outside the premises.

Initially, the PDP supporters  were said to have broken the rule when they cheered up Obi, the PDP, Vice Presidential Candidate, thus forcing the APC , supporters to do  follow suit to cheer Osinbajo. This may have angered the  NEDG and Official  to repeat the earlier warning of ”No cheering or jeering of any Candidate” or he would invoke the law on any person violating the rule. The warning may have calmed the people. Until the debate was over, the party supporters were said to have  conducted themselves in a very orderly manner to watch the proceedings.

Those who watched the debate  at the  NTA studio , said the five Vice Presidential  Candidates came well prepared to outsmart each other in selling their parties programme to the  public.  Khadija and Umma, the youthful Ladies Vice Presidential Candidates  of ANN and YPP, respectively, may not have been scared of the towering image of Osinbajo and Obi, in the Nigeria polity, that they spoke their mind on national issues and how to fix the economy. The duo stopped short of laying the problems of the country in the last 19 years  to bad leadership.

Osinbajo, the Vice Presidential Candidate of President Muhammadu Buhari of  the ruling APC  may have attended the debate armed with facts and figures  about the expenditure of the Buhari Administration  in the last three and half years on capital projects abandoned  the former President Goodluck Jonathan regime including provision of new infrastructural facilities, particular investment on power generation and distribution in the country.

He cited the building of a distribution and transmission  plant at Aba and Kano , to serve the Ariaria and Arewa markets in Aba and Kano respectively.

He disclosed that the Buhari Administration had taken the bold initiative  because  of what could be manufactured in these markets which could compete favourably with imported goods. He also cited the abandoned Lagos -Ibadan road  by the then PDP  government which had reached the stage of completion and the revitilisation of the country’s railway system.

The APC Vice Presidential Candidate disclosed that the APC government had built the medium gauge railways between Lagos and Kano. He said the Lagos- Ibadan  of the rail project which was the first phase of it would be ready for use in January, 2019.

Osinbajo,  further disclosed that  that the Buhari regime had already completed the Aladja -Warri section of the railway project  and equally awarded the contract for  the Kano-Maradi rail project, described in party circles as one of the oldest  commercial routes in the country. The APC  Vice Presidential Candidate claimed that  despite the downturn  in the international oil market , the APC, government has spent more money on the provision of infrastructure than the Jonathan Administration when oil price rose to over $150 per barrel. Moreso, he said the government attracted $2 billion Direct  foreign Investment, FID, in 2015 alone, noting that the FID, rose to $17 billion in 2016.

The impact of the FID,  in the economy may not have been felt as Buhari, was said to have told the state governors at the Presidential villa, recently, that the ”economy of the country was in bad shape”, confirming what Godwin Emefiele , the governor of the Central Bank of Nigeria, CBN, had earlier said .

Perhaps, one question, that may have rattled Obasanjo , was on fuel subsidy, where he was told that the Buhari Administration had spent more money on  subsidy than the previous Administration, which  Obi, the PDP, Vice Presidential Candidate, described as” subsidising inefficiency”. The APC Vice Presidential who defended the Buhari’s government action said the price of a petroleum products, particular, petrol, would have gone up  , which could have a spill-over effect on every sector of the economy as the prices of other goods, rent and transportation would go up which could fuel the inflation rate of the country.  He noted that there is no country in the world that does not subsidise one commodity or the other, According to him, the US, government , subsidises Agriculture to force  down the price of rice and other Agricultural products down.

Obi may not have been carried away by the figures released by Osinbajo, his counterpart in APC about the achievements of the government but was determined to use the  facts and figures obtained from  China, an Asian economic giant and south Africa, the second largest economy in Africa, to show that the APC , government has failed the country.

He averred  that the APC government  have not done the right thing as  they have not created jobs but fighting corruption. ”You can’t shut  down  your shop  and be chasing criminals”, Obi had said.

An angry Obi  said, the country’s GDP was 120 in 2015 and the country’s per Capital Income was N2,500.00, noting that the country’s stock market has lost  over N2 trillion in one year under the Buhari government. This may have given Galadima, Khadija and Umma, of the ACPN, AAN, and YPP, Vice Presidential Candidates respectively to state that only their parties have the capacity to fix the economy of the country  and create jobs for the unemployed youths  as the two dominant parties,” APC and PDP”, have failed the country.

2 thoughts on “2019 Presidential Debate: Osinbajo, Obi And Others Set The Stage”