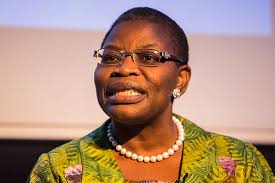 Barely one week after Obiagali Ezekwesili, a former minister of Education under Olusegun Obasanjo Administration and former Presidential Candidate of the Allied Congress Party of Nigeria, ACPN, honoured the invitation of the Nigeria Elections and Broadcasting Organisation of Nigeria alongside two other Candidates, to participate in a Presidential debate, she had tactically  withdrawn from the race last Thursday.

Ezekwesili, popular, Oby, may have disappointed many of her supporters  and those who took a likeness for her after  the Presidential  debate to help push  ”these blood-sucking  political class out of office including President Muhammadu  Buhari of the All Progressive Congress, APC.

In withdrawing from the race, the  former ACPN, Presidential Candidate had said  the” decision followed  extensive  consultations  with leaders  from various walks of life across the country over the past few days”.

Ozioma Obabuko, Spokesperson of the ACPN,   Candidate, may have spoken her mind when he said , she stepped from the race to help build   a Coalition  with people of like minds  to win the February 16, 2019,Presidential  election.

Fela Durotoye,  the Presidential Candidate of Alliance for New Nigeria , ANN. Was also said to have signified his intention to step down   in order to form  a Coalition  that could defeat  Buhari and Atiku Abubakar of the People Democratic Party, PDP, in the election.

This is an indication that the duo and others who are described as motivational speakers and political dwarfs by Itse Sagay, a senior Advocate of Nigeria, SAN, and Chairman, Presidential Advisory Committee on Corruption, PACAC,  may have reached agreement to form a Coalition , regarded in political circles as the ”Third Force” to contest the election.

but Mahmood Yakubu, a Professor and Chairman of the Independent National Electoral Commission, INEC, may not have found the former minister’s action funny. The Commission had turned down  the former ACPN,Candidate request insisting that She must contest the election , which is slated next month on the ground that all the arrangements for the election has been made including publishing the final list of the Presidential Candidates  that would contest the election.

The Commission  may have been encouraged to turn down her request because  the date for any Presidential Candidate to withdraw from the race has passed.  Going by the time table, November 17, 2018, was the last date for the withdrawal  or replacement of any Candidate by any political party.  The ACPN, Presidential Candidate  withdrawal may have drawn much public attention because of the crisis  rocking the party, forcing the leadership  to withdraw their support for her.

An Ganiyu Galadima, the party National Chairman and who incidentally was the Vice Presidential Candidate  disclosed that the party was forced to withdraw its  support for her because” she took a decision to” withdraw from the February 16, 2019, Presidential election without consulting the party leadership, whose mandate she was holding”.

Galadima disclosed that from the onset, Ezekwesili, did not have anything on ground to show that she was ready for the election. The party Chairman may not have been happy with her over the attack on Buhari, during the last Presidential debate and thus, plotted her fall. ‘

According him, ”Ezekwesili is the only  Presidential Candidate  who is so militant  in her Campaign without any tangible thing on the ground to indicate any seriousness in the prosecution of her Campaigns”.

According to him, she did not a have functional  Campaign secretariat or billboard  like Buhari , Atiku , and other serious Presidential Candidates. Her case may have been made worse  by Galadima, the party Chairman and Vice Presidential Candidate, who may have mobilised the party Chieftains and members to throw their weight  behind Buhari, the APC, Candidate. The anger in Galadina against the former minister  is well pronounced when he averred that she using the” party platform  to negotiate   for the position  of  minister of Finance with Buhari  if re-elected”.

Recall that during the Presidential debate , she had repeated attacked Atku , the Candidate of the PDP. She had revealed that a special report by a United States, US ,  Senate Committee on foreign corruption  had concluded  that ”over an eight-year  period from 2000-2008, Atiku  and his wife, Jenifer Douglas, were able to bring  over $40 million  in suspect funds to the  country”. She may have gotten the US Senate report as a former World Bank official. Her criticism of Atiku was further pronounced when she exposed other  filthy  issues  involving him   ranging from the” PTDF saga to the $2.8 million Siemens bribery scandal”.  Based on the informations, she was seen as a reliable candidate that  could be trusted. It however turned out to be a misplaced trust when she withdrew from the race.

Many believe that she may have been working for Buhari, the Candidate of the APC, underground to win his ears in order to be appointed minister of Finance , if  re-elected, confirming what Galadima, the party National Chairman  had said .

In apparent reaction to the party  accusations and withdrawal  of support for her Presidential ambition, tan aggrieved Ezekwesili, was said to have fired back at the party leadership, stressing that  her withdrawal from the race and  party membership was a right decision which cannot be faulted by anyone.  She said the decision to dump the party was a fallout of several   months of waiting  for its leadership to ditch  its ”transactional  approach  to politics and commit to new  values of disruptive politics she has desired and preached within the party”.