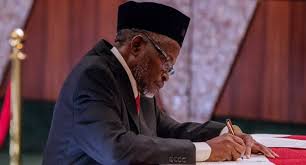 After  several months of legal battle   between Atiku Abubakar, Presidential Candidate of the People’s Democratic Party, PDP, in the February 23, Presidential  election and Muhammadu Buhari , of the ruling All Progressive Congress, APC, the  later and the party Chieftains can now heave a sigh of relief.

This is because Ibrahim Mohammad,  Chief Justice of Nigeria, CJN, based on the documentary  and oral evidence presented by the  legal teams of the parties  had ruled that   Buhari,  the APC Candidate was eminently qualified to contest the last Presidential  election, which  he had won.  The Supreme Court had on October 30, 2019, dismissed the  appeal by  the PDP Candidate  that  that  the Katsina  state  born Nigerian President was not  educated up to secondary school level  which disqualifies him to contest for the election .

In giving the judgment  on October 30, 2019,the CJN , had announced that  the Court  will give reasons for dismissing the PDP’s Candidate petition on a later date. At the hearing   were all the Senior Advocates of Nigeria, SANs  who had   led the legal team of  the APC Candidate  and the INEC Lawyers  who were said to be seated at the Court but without the PDP Lawyers.

It may have dawned on Atiku and the PDP Lawyers that the game is over going by the direction of the judgment  which had begun to unfold over the months.  It was not surprising why the 20 SANs and 30 Lawyers  engaged by Atku for the legal battle to prove that  Mahmood Yakubu, a Professor and Chairman, Independent National Electoral Commission, INEC, made a mistake by declaring  Buhari, the APC, Candidate as the winner of the February 23, Presidential election on Friday, November 15, 2019.

Eyewitness account said there were many SANs and Lawyers who were in Court to listen to the reasons that may  be adduced by  the CJN, for dismissing  Atiku and PDP’s appeal. The Value News learnt that there was absolute silence in the Court room as John Okoro, a Justice of the Supreme Court , read the submissions of the CJN.

According to him , the failure of  the appellants  to call credible witnesses  was  a fatal mistake on their part  . The petitioners  had  presented five  witnesses including a star witness , who were said to have relied on’’ hearsay evidence’’., thus making Atiku’s case worse. Buhari and APC  lawyers may have cashed on it  to make nonsense of Atiku’s legal Team arguments.

Note that in  unanimous  summary judgment that was given by  the CJN, on October 30, 2019, the apex Court  had dismissed  Atiku and the PDP’s petition , on  grounds  that the petitioners had  failed  to substantiate  the allegations made against  the APC Candidate and his party, APC .

Okoro, a Supreme Court Justice, who was mandated to  read out  the  CJN, submission on Friday, November 15, 2019,  repeated the claims of the CJN, that  the petitioners also ‘’ failed to prove  the issues of over voting  as they could not produce  the  authentic  voters  register  to validate their claim. TNote that the authentic voters register  could only be obtained from the INEC office  on the approval of Yakubu, the INEC Chairman which may be difficult to get. This is because Atiku had included INEC Chairman and the Commission in the petition against Buhari, the APC Candidate at The Tribunal. Atiku’s Lawyers were said to have applied for it  through the INEC Chairman’s office but that was how far they could go. They never got  it, thus making it impossible to substantiate their  clients allegation in Court.

Political analysts believe that  if Yakubu, the INEC, boss, had given out the  authentic voters  register of the various  states  of the Federation  to Atiku and the PDP Lawyers, the case could have assumed a new dimension  which may go either  way.  This may have informed  why the Commission  refused to bow to pressure from both official and unofficial quarters to release such classified information to them. Moreso, Yaku could  not have presided over  his own fall as it would  amount to betrayal of trust  to Buhari  who appointed him to Head the  electoral umpire.

Okoro may have gladdened Buhari and the INEC legal  team  when  he declared that  the Supreme Court judgment delivered by the CJN, on  October 30, was in total agreement with the lower Court  which ‘’upheld  and confirmed’’  the election of Buhari, the Katsina state born politician and the APC Candidate on the February 23, 2019 election  as the elected  President and Commander-In-Chief of the Armed Forces of Federal Republic of Nigeria.

Recall that the Tribunal had rejected  all the three  of Atiku’s claims  that the,’’ Presidential election was marred  by irregularities , that  he, received more votes  than Buhari and that the  President   did not have  a secondary school Certificate, a basic requirement  needed to contest the election’’.

Mohammed Garba, a  Justice of the Supreme Court , who presided over the Presidential election Tribunal , who was said to have  delivered  the judgment  had ‘’dismissed  Atiku and PDP’s  petition in its entirety’’. The Supreme Court  Judgment may have finally sealed the hope of  Atiku,  the Adamawa state born politician hope  of recovering what he had described as his ‘’stolen mandate   by Buhari and the APC’’.

He may have rejected the Tribunal and the Supreme Court judgment but that   was how far he could go.  But for the victorious Buhari and his Camp, ‘’it is  time  for the country to move forward  as one cohesive body , putting  behind  all bickering and potential distractions over an election which Nigerians spoke clearly  and esoundingly’’.

Recall that International observers did not dispute  APC Candidate victory in the February 23, 2019, election, but however, gave a verdict  that the conduct of the election was widely flawed,  which was an indictment on Yakubu, the INEC boss and his officials both at the state and the Federal level.   This may have informed why  the European Union, EU, Observer  Mission,  at the   last  Presidential election had said that  ‘’ the country’s election s needed reforms  after being marred by violence , systematic failings and low turnout of voters ‘’.