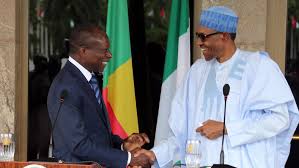 This is because  Presidents Patrice Talon and  Muhammad Issofou of Republic of Benin and Niger respectively, who were initially   hesitant   to support  Nigeria  in the anti-smuggling war have finally agreed do so.

The duo may have agreed to do so  owing to  the pain being  inflicted on their people because  of the border closure over the last two months. More worrisome was the rising inflation and near collapse of their economies.

The biting economic  situation, according to sources,  may have become  so bad in Benin, particular, that Talon, the Beninese, President,  has suddenly become the champion of the anti-smuggling by  urging Issoufou,  his Nigerien  counterpart to join Nigeria   to curb the menace  of the  cross-border  smugglers, who are making nonsense of the country’s fiscal policies on the smuggling of foreign par boiled riced rice   and other profited items including petroleum products .

The duo may have listened to the cry of their people  to plead with  Buhari , their Nigerian counterpart to reopen the Borders.  They were said to have  agree to support the Nigerian government  in the anti-smuggling war.  Many believe that  Benin, particular, may not  have been  interested in joining  Nigeria in the anti- smuggling war  because of the revenue the country is getting from foreign rice imports  through the country’s seaports which are re-exported to the land locked countries of Niger and Tchad but which found their way into the Nigerian market through unapproved routes.

Ali, the Nigerian Customs Comptroller General may not have been interested  on the revenue  country is making from such imports but would want the country to hand  over the Consignment to Nigeria for necessary action . It was a difficult order for Talon to comply with. Aware that Nigeria government  was not ready to  bend in its decision  to close the borders with the neighbouring  countries which is hitting hard on the people he has no option but to bow to pressure from both official and unofficial quarters to support Nigeria anti-smuggling war.

Many believe that if Talon had taken this decision long ago  when  the Katsina state born  Nigerian President had  reached out to  him and his Nigerien  counterpart  urging them  to block their  own side of the borders so that  the cross- border smugglers  would  not be able to carry out  their nefarious activities again, it may not have gotten to the point of Nigeria taking a unilateral decision to close the borders  with the neighbouring  countries of Benin, Niger and Tchad andwhich include  the Central African country of Cameroon.

The change of mind by Talon, the Beneinese  President  and the cry of the people of these neighbouring countries and the  other countries in the West and Central African sub-region may have forced  Buhari to soft-pedal  in order to hold talks with the Benin and Niger government  to resolve the crisis.

The fallout was the agreement  to establish a Joint Border Patrol Team comprising of three security agencies: Police , Customs  and Immigration   from the  three countries.  The Team is expected  to hold its  first inaugural meeting  in Abuja, Nigeria, between November 25, 2019 and November 27, 2019.

The Committee may have given the Team  the  free hand  to agree on the ‘’modality  to be used to carry out its operation and recommend a date  for the reopening  of the closed borders by the Nigerian government’’. This is an indication that it is no longer going to be the sole responsibility of Nigeria to decide  on when to  reopen the closed borders. Recall, that that the Katsina state born Nigerian President had set January 31, 2020,for reopening the closed borders.

Geofrey Onyeama, minister of Foreign Affairs, who was at the  tripartite anti-smuggling meeting  comprising of other  top government  officials  from   Nigeria, Benin and Niger at Abuja, the Federal Capital Territory, FCT, on Thursday, November 14, 2019, disclosed that they reached the agreement  to set up  a Monitoring and Evaluating Committee of the three countries  after reviewing  all the concerns raised  by each of them. The Committee , according to Onyeama,  has been mandated to come out with actions  that would  facilitate  and enhance the suppressing  of smuggled goods and other related matters  across the borders.

The Value News learnt  that the Committee also have the powers  to ensure the implementation  of the adopted  mandate  of the Joint  Ant-smuggling  and Human Trafficking Committee. Another  Committee  that was said to have been set up  at the Abuja tripartite meeting  was that of Trade Regulation, which would comprise  of the ministers of Finance and Trade from the three West African countries.

Giving an insider information,   the minister disclosed that  one of the duties of  the Committee is to promote  intra-regional trade  among the three countries as well as  put in place sanctions against smuggling of goods across the border.   It was not surprising why the tripartite meeting  dwelt  extensively on  the area  of smuggling  of goods and services  not approved  under the Economic Community  of West Africa  States Trade Liberalisation Scheme, ECOWAS ETLS.

The good news was that the three countries had acknowledged  that  smuggling of goods across the border and Human trafficking  was a Collective violation  of ECOWAS Protocol on ETLS and free movement of goods and services . The ministers at the tripartite meeting had noted that  cross-border  smuggling and Human trafficking   had  posed ‘’severe economic  and security  threats  to intra-regional trade and free movement of persons’’. Over the years, the Nigerian government  repeatedly  had complained about the abuse of the ECOWAS  Trade Protocol by Republic of Benin but the country was not ready to change as it opened its ports for all sorts of foreign cargoes imports including foreign par boiled rice from the Asian country of Thailand .

Perhaps, to ensure  all the decisions taken at the tripartite meeting  as regards  to the implementation of the ECOWAS   Trade Protocols,  the  participants  at the meeting were said to have addressed the issues  as regards  to the’’ free movement  of persons  without valid ECOWAS travel documents as well as the plethora of illegal warehouses  along the border corridors’’. They were said  to have  agreed  to ensure  that’’ citizens  of the three neighbouring  countries enter and exit  each other’s country  with valid ECOWAS  Travellers Documents through recognized and controlled routes’’.

Nigeria Representatives at the Abuja tripartite meeting were said to have been  emphatic  on the  use of the valid ECOWAS  traveller’s Document  to enter and exit the country  to avoid abuse of the African  Continental Free Trade Area, AfCFTA, Agreement, which had had already been signed  between Nigeria and Benin in Niamey , Niger, on July 7, 2019 at the 12th extraordinary Summit  of the African Union, AU, Heads of State and Government. The African trade accord was said to have launched  on March 21, last year at Kigali, Rwanda.