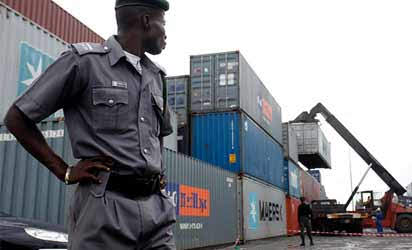 It was not unexpected when Muhammed Abba- Kura, Comptroller, Apapa Command, announced a N203.26 billion that was generated between January and 2019, fiscal year. This is because of the strategies that said to have been put in the Customs Comptroller from onset to carry the officers and stakeholders blocking areas of revenue leakage, such as underpayment.

An elated Abba-Kura,  told The Value News that from the onset,  he had assured the officers and stakeholders ”we are going to facilitate genuine trade”. He further disclosed that he adopted  an ”open door strategy” in running the  Command. This is evident going by the way he threw his door pen to industry stakeholders who approach him with one trade Complain or other. Some were said to have approached him with their personal challenges which he never hesitated in solving it for them.

The fallout was that the importers with their agents became compliant in taking delivery  of their Cargoes without cutting corners. Those who attempted to shortchange the government would  never forget their experience in a hurry  as they were issued outrageous Demand Notice, DN, thus, pushing up the  monthlyrevenue generation of the Command.

Only recently, KC. Ekekezie an Assitant Comptroller General , ACG, in-charge of the Nigerian Customs Service, NCS, Zone A, Lagos, could not hide his feelings that Apapa Command could make a daily revenue generation of N5 billion. The Customs  Comptroller  noted that the level of revenue  collection  by any Customs Commands on the Consignment and the rate of duty to be paid  by the importer as contained  in the Economic Community of West African States, ECOWAS, Common External Tariff, CET.

TECOWAS  CET, according to Customs sources cover 2015 to 2019, fiscal periods, composed of three categories made of an import adjustment list of 173  tariff lines, a nationalist consisting of 91 items and an import prohibition list which is applicable to certain goods originating from NON- ECOWAS member States. Note that member countries are at liberty to review the rates either upwards or downwards, which the government had done several times.

Note that in the last four years , President Muhammadu Buhari, had repeatedly  approved  some fiscal measures  for implementation  together with the ECOWAS CET . Recall that in 2026 alone,  the Katsina state born Nigerian President  had given approval  for the reduction   of duty on 26 items but  left the tariffs on 144 items unchanged.

It is not surprising why the Apapa Customs Comptroller had said that the duty collection of the Command actually depends on a number of factors: the Consignment and issuance of DN, to NON Compliant traders.

Despite the strategies adopted by the Apapa Customs Comptroller to boost the  revenue generation of the Command within the last six months, he also attributed  the sustained success recorded  to ”professionalism and sensitisation  of officers as to their responsibilities and working in line  with the standard  operational procedures for optimal revenue collection”

Abba -Kura, may have successfully the Command import Sea but much still need to be done on the export of cargoes to China through the port. In the past, unprocessed wood earmarked for export to China had fallen into the waiting hands of the Federal Operations Unit, FOU, Operations and Lagos Roving Team, Headed by Riks Lura, a Chief Superintendent of Customs, CSC.  some of those unprocessed wood loaded in ”20” are losing value at the Command Mechanical Workshop  turned Govern open Warehouse.

The Customs Comptroller, who had had Headed the Customs post-Audit Department  may have known about the fraud associated with  the Command that he was said to have beamed his searchlight on exports through the port. These may have forced many of the fraudulent exporters  and their Customs Collaborators to go underground.

Given his decision to facilitate genuine trade, he disclosed that the Command handled a total of ,95,229.15 metric tons of exported goods to different parts of Europe and the Asian country of China and the United States, US. The Free On Board , FOB, value of the exported Cargoes, mostly Agricultural and solid mineral products was put  at about $46,613,453.75, which is equivalent of nN14.24 billion, going by the exchange rate of N326.00 to a dollar recently approved by the Central Bank of Nigeria, for the clearing of all imported and exported cargoes.

The Command Enforcement officers may have been alive to their duties as they were said to have impounded  29 Containers loaded with items from China and were said to have contravened the country’s import procedures.

The items that were said to have been discovered in the Containers during a hundred percent  examination by Representatives of all the approved security agencies at the seaport including a  Representative of the Comptroller General, CGC, Strike Force, include tomato paste, vegetable oil, Ladies and girls fashion  foot wears. Perhaps, if the Command Enforcement  Unit , had not made the seizures , it would have fallen into the  waiting hand of Mohammed Aliyu, FOU, Zone A , Comptroller, Usman Yahaya, a Deputy Comptroller and Coordinator, of the  Strike Force team, Zone A, Lagos.

Many believe that the  seizure of trucks  laden Containers which had contravened the country’s import procedures released  at the Apapa seaport by FOU, Zone A, personnel, , had dropped in the recent time.  Maritime analysts would want the Customs Comptroller to extend the same control he has at the port on the Bonded terminals affliated to the Command , described to be a haven for  fraudulent agents and their Customs Collaborators.

Aliyu, the FOU, Zone A, Customs boss , could not hide his  feelings at a recent talk  shop at the  at the National Association of Government Approved Freight Forwarders , NAGAFF,  premises, dubbed NAGAFF village, at Apapa.

The Apapa Customs Comptroller have word of advice for stakeholders: to change their attitude of doing business to avoid falling into the waiting hand of Customs personnel at the port.