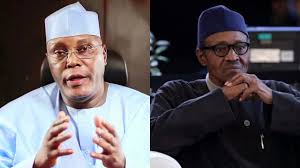 For daring to challenge President Muhammadu Buhari of the ruling All Progressive Congress, APC,  in the Election Petition Tribunal,  the party appears to have added another  dimension into the matter to force the Nigerian  Immigration Service, NIS,  officials,  to go after the former Vice president and   People’s democratic , PDP,  Candidate, on the allegation that  he was a Camerounian and therefore not qualified to have  contested the  Saturday, February 23,2019 Presidential election.

The Katsina born Nigerian President  and the APC, leadership, may have been forced to come up with the allegation  that the PDP Candidate is a Cameroonian   to complicate the matter in the Tribunal  because of  his petition before the three man Tribunal  stating that  he was the” lawful winner  of the February 23, 2019 election” .

He had  told that  he won the Presidential election  with about 1.6 million votes  to defeat, Buhari, the APC, Candidate , who was declared winner by the Independent National Electoral Commission, INEC, and thus, issued a Certificate of Return to him. The Commission had declared that the APC Candidate  won the election  with 15,191,847 votes  to  defeat the former Vice President  who polled  11,262,978 votes

Convinced that he won the election, the PDP Candidate was said to have  has urged the Tribunal   to nullify  the 2019  poll and ordered  for a fresh election  that will be conducted  in lines  with  the provisions of the country’s electoral laws. The initial claim by the APC Presidential Candidate  and the party  leadership to the security agencies  including the Department of State Security, DSS, was that Atiku hacked the result from INEC server to prepare the ground to force the Commission  to drag him to Court for  entering their server secretly.

Political watchers, however, believe leadership of the ruling may have known the direction of the case in the Election Petition Tribunal that they came up with the allegation of Atiku not being a Nigerian to facilitate his deportation to Cameroon and thus ruins his Presidential . The party had claimed in its petition to Tribunal that the PDP, Candidate is a Cameroonian and therefore   President Buhari, Candidate who won the last Presidential be ” for lacking merit”.

Lateef Fagbemi, a Senior Advocate of Nigeria, SAN, and  the party Lawyer ,  was said to have  also petitioned the Tribunal  insisting   that as Cameroonian , Atiku ought not to have ” taken part in the February 23, 2019, election  in the first instance”.

Going by the brief given to the  legal luminary by the APC  leadership,  the party claimed that  the PDP Presidential Candidate was born  on November  25, 1946 ,in Jada, Adamawa, in Northern Cameroon  and  therefore not a Nigerian by birth.   It is not surprising why  the party had consistently maintained in the recent time  that  Atiku had” no right to be voted for   in the  election to  the office of the President of the Federal Republic of Nigeria in the last Presidential election.

There are fears that  the Abdulrahman Shugaba Darman, who was an  elected a member of  the Borno state House of Assembly in 1979 on the platform of the late  Wakiri Ibrahim  Great Nigeria’s People’s Party, GNPP may play out itself again.. Darman who  rose to become the Majority leader of the House  bwas deported o a village in Chad in the allegedly politically motivated  action of  then ruling National Party of Nigeria, NPN.

have informed the reason why believe that  APC  allegation against Atiku, the PDP Presidential Candidate as a by the ruling APC  was politically motivated to have reason to push for his deportation to cameroon.

Describing the allegation as laughable, Atiku  said ”the position  of the APC  was so pedestrian  and shows such a straw  clutching  desperation  ” that should be ignored. Recall that between  the  1980s and now, Atiku had  been very visible in Nigeria Business and political circles but it did not occur to  Buhari  as  a former Head of State that he was not a Nigeria until he retired as a Director of the Nigerian Customs Service to ventured into the murky waters of Nigerian politics.

Note that he celebrate, years as the country’s Vice President and also made attempts to contest for the office of the President of Nigeria, on the platform of the PDP and APC,  respectively at different times. He is the  PDP, Presidential Primaries in 2007 but lost to late President Musa Yar’adua and in 2011 to Former President Goodluck Jonathan. Given his political ambition to rule Nigeria at all cost, he had contested the APC, Presidential primaries in 2015, but lost to Buhari. He had thrown his weight behind the APC Candidate to win the election.  The duo may have fallen apart because of the 2019 election and the APC leadership with the support of Buhari are out to use the Federal might to frustrate him.

A  source told the Value News that  Abdulrahman  Dambazau,  , Lt. General and a former Chief of Army Staff and who is incidentally  the minister of Interior  is waiting for a Presidential directive to give the final order to give a nod to Mohammad Babadende, Director NIS, to his officers to deport Atiku to Cameroon.

Many see the APC action as part of the political plot   to silence Atiku, to drop his case against  Buhari, the APC, Candidate at the last Presidential election  at the Tribunal.  Already the PDP Presidential Candidate  was said to have assembled  a team of over  twenty SANs  who are waiting in the wings  for the APC  in Court.

A Lawyer  averred that if APC, thinks, these would be another Shugaba Darman  case to celebrate , they have made the worst mistake as Atiku would floor the government in Court, with all the documentary  evidence to prove that he  is a Nigerian by birth day and had lived all his life in the country.