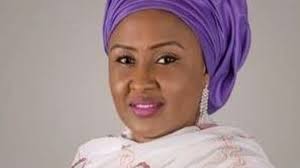 Aisha Buhari, Nigeria’s First Lady is not used  to frivolities. She  speaks out her mind whenever, she found  out that  things  not  going  the right way in the government under the close watch of her Husband. Recall that in 2018, She had told the BBC, in an interview that   there is a Cabal in the Presidency  holding back the development and influencing the President’s appointments.

This time around, the First Lady, appears  to have exposed  the rot   in the All Progressive Congress, APC,  controlled  government’s  Social  investment  Programme, describing it as a failure. Hajia Buhari, who spoke in an interactive  session    with women  in the Presidential Villa, on  Saturday, May 25, as a prelude to  the inauguration of  President Muhammadu Buhari, for his second term in office, on Saturday , May 29, 2019,had queried  the ”method  used by the government in executing  the programme”, which may  had seen  as a well thought out Investment but gone down the drain.

Note that in the last four year years, the government was said to have spent  about 480 million  on the programme alone. This is evident by  the remarks  of the First Lady  that the government spent  $16 million  to buy mosquito nets  in Kano , an APC , controlled state, in the north west geo-political region. An angry  Nigerian First Lady had described the amount as outrageous, noting that ” $16 million is enough to fumigate the whole country”. That the programme failed woefully in Kano state is not surprising. This is because of the too many interests involved which won the contract to supply the mosquito nets in the state without proper supervision .

Giving a further insight about the  mosquito m nets scandal in the state, She noted that  it never went round the people. ”I did not get it ”, she said.  Sh, has every reason to  worry. This is because   Maryan Uwais, the Manager of the Programme   and Senior Special Assistant to the President  on the Social Investment Programme   was an indigene of the state.. President Mummadu Buhari, of the ruling APC, according to Presidency sources meant well with the programme  to alleviate the suffering of the poor masses but  Could not be everywhere to supervise the execution of the Social  Investment Programme.

by The Value News shows that not all the the $16 million for the mosquito project. That much was confirmed by the First the interactive session with the women.  ”Most of the Northern states did not get the money”, she said. said to have cited Adamawa, her home state, which did not get the allocation, of the 22 Local government Areas benefitted from the failed programme.

The Programme , may not have  been a total failure,  as she confirmed  that it worked well in some states.   This is evident in Lagos and Rivers state and where  the   $16 million  mosquito nets allocation was actually used for the purpose as  the people  got it with happiness.  The Magazine learnt that there were  millions of mosquito nets left uncollected in  the local government areas in these  states  that  found their way into the market  for sales.

According to her, the President may have  to adopt  a different strategy in distributing  the money to the states  where the programme  did not succeed, particular the northern states in this his second term in office She had  expected  the N500 million, budgeted for the  Social Investmment Programme  to be utilised in different methods., in order to achieve the desired objective.

This is where Ibrahim Magu, a Commissioner of Police, CP, and acting Chairman , Economic and Financial Crimes Commission, EFCC,was to clamp down on the Uwais, overseeing the Programme and the outgoing states  to know how  the $16 million allocations to the states for the  Social Investment Programme, particular,  for buying of mosquito nets for distribution in the state was spent  before they finally handover  to the governors-elect  on May 29, 2019.

Many believe  that if Magu, who is feared in political circles, because of his no nonsense  attitude to issues relating Corruption in the country,  the new governors,  would do a similar thing if they have the opportunity of getting the same  allocation from the FG, for the Social Investment programme, to buy mosquito nets  for the people.

The  EFCC, operatives, may find it difficult to quiz, Uwais, the Manager of the programme, because  of her connection in the Presidency or  Gadunje, who won his re-election because of the immunity that covers his office . But Abdullaziz Yari, the governor of Zamfara state  and former Chairman, Nigerian Governors Forum , and others state governors, in the north who were not re-elected or who have completed their second term in office,  need to be quizzed  over the $ 16 million Social Investment Programme in their respective states. Critics averred that his is the only way the EFCC boss, may have to convince Nigerians  that the  Buhari government anti-Corruption war was not a  fluke.

Note that there have been allegations making the rounds that the President may be sincere but most of his political appointees and the cabal around him are swimming in corruption. The  sacking of Babachair Lawal, a former Secretary to the government  over alleged Corruption speaks volume.