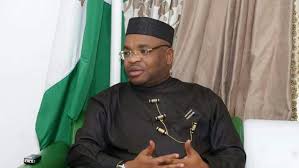 Ahead of the May 29, 2019 inauguration which will signal a fresh term for Governors and Governor Udom Emmanuel wants to be arm with the number of projects executed by his government both completed and ongoing since 2015 when he mounted the Hilltop mansion as Executive Governor of Akwa Ibom State.

In order to achieve this,the Governor on Monday May 13 inaugurated a five man Projects Verification and Compilation Committee to compile projects executed by his administration since its inception four years ago.

The Committee is to compile all the projects executed by the present administration, the cost implications and the work done.

He tasked the members of the inaugurated Projects Verification and Compilation Committee to carry out their assigned duty with utmost commitment to get accurate number of projects, level of work and cost of execution.

He said it was a step towards fulfilling his administration’s promises of displaying transparency and integrity in governance of the state. He said the goal of the project audit was to make account for the state funds expended on investments and projects execution.

For the achieve a smooth execution of the task, he want to be the head of government institutions to co-operate with the committee by furnishing the members with accurate information and documents so that the committee would be able to come out with untainted report that can be ascertained by the public put an end to speculations abound in the state that some of the projects were mere s . And he wants the report of the Committee to reach him before May 29.

The committee has Mr. Ephraim Inyang-eyen, the State Commissioner for Works as Chairman, while Pastor Uwem Andrew-Essien, the state Accountant-General is to serve as secretary.

It could be recalled that the Governor pre-campaign agenda hanged on Industrialisation and some of the key industrial projects his government has executed include the Toothpick and Pencil factory, Syringe factory, Coconut refinery, revitalization of Peacock Paint and a number of road projects.

However, critics still question the rationale in the Governor appointing the Commissioner of Works Ephraim Inyangeyen who is in charge of project execution in the state to head the Committee. Those holding this opinion argued that he heading an audit team of government projects which is to verify if such projects are actually on ground, and what level of completion are they, and the whether the amount deployed is in commensurate with work done amounts to government investigating itself or being a judge in its own case.

Their reasoning is that an independent body should have been incorporated into the team if the Governor expects to get a thorough report as he wants.

But the Commissioner say the team will do a thorough work to justify the confidence repose on them.

The Value News gathered that as part of the May 29 inauguration, the Governor is expected to commission some projects, although those projects are not yet known as the time of this report as the programme to commemorate the inauguration is yet to be release.