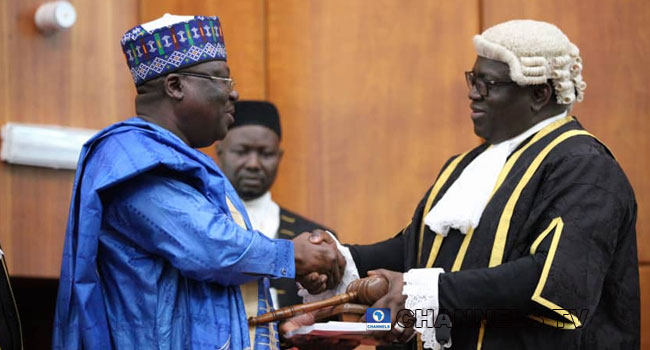 Not many people were surprised that  Ahmad Lawan, a Senator  elected under the platform  of the  All Progressive Congress, APC,  from Borno state, North east geo-political region defeated  Senator Ali  Ndume, also, from the Borno state, to clinch the president of the Senate.

This is because President Muhammadu Buhari, who could sit by and watch the National Assembly members elect their own leaders  in the spirit of Separation of Powers   had  intervened to forestall  a hostile  Camp backed by the Opposition People’s Democratic Party, PDP, taking  over the leadership of the Assembly.

Note that the party National Working Committee, NWC, at the instance of the Katsina state born Nigerian President  had adopted  Lawan and Ovie Omo-Agege, a  Senator elected under the platform of the APC, from Delta state, to be the deputy Senate President respectively.

The Value News learnt  that for much of last week  and late Monday, June 10, 2019, the Presidency and the  NWC, including the state governors , elected under the platform of  the party had  worked  round the clock  to ensure  that  the duo presented by the party   take over  the leadership of the 9th Senate  by getting  block votes from the APC elected Senators. The respective and members of the have had one on one discussions with the NASS members to force them to support the party adopted Candidates.

Note that the APC  has  a simple majority in the both the Senate and the House of Representatives, which places it on a better  position to produce the leadership of the NASS.  Danjuma Goje,a former governor of  Gombe state, may have read the handwriting  on the wall that whoever may be sponsored by the party  for the  positions of the Senate President, Deputy Senate President, Speaker of House of Representatives or the Deputy Speaker,  will be difficult to defeat by any other Candidate backed by the Opposition PDP,  that he quickly withdrew from the race to support the party  adopted Candidates.

rji Uzor Kalu, a former governor of Abia, who had signed interest for the position of the deputy had remained hesitant insisting that he will contest for the position on the floor of the Senate. He was said to have withdrawn from the race when there was intense pressure on him from both official and unofficial quarters to do so.

The pressure on him became more withdraw from the race when information leaked out that the PDP, may likely adopt S Ike Ekweremadu, a former deputy Senate President in the  8th  Senate from Enugu state,  south east Nigeria, to contest for the

The APC, NWC, did not want to take chances by giving Kalu, the former Abia governor, the go ahead to test his popularity on the floor of the Senate as it did to Ndume but forced him to withdrew and throw  his weight behind Lawan, the President’s Candidate. He has no option  as a Party loyal member than  to support the Borno state politician in his Campaigns to defeat Ndume.

The coast was left open for the elected PDP  present   Ekweremadu, to contest for the vacant position. They were optimistic that he will win his APC opponent Omo-Agege,  because of his experience.   He had tried to discredit the APC, Candidate, over involvement in last of the mace, which was a symbol of Authority to the Senate President.  In a voice laden with emotion, he had told the  Senators not to vote for someone who have the t interest of the hallowed heart but to serve the interest of the Executive arm of government. He had promised to  assit   the Senate President to do his job as it ought to . He got it wrong.

Unknown to him, the President and the APC NWC, had concluded plans to those that would take over the leadership of the NASS,  and  his name was not on the list. It was a complete break from the immediate  hostile Bukola Saraki, a former governor of Kwarra state era.

The pattern of voting in the Senate and the House of Representatives clearly shows that the Presidency and the party NWC, had made up their mind  on the  leaders of the 9th Senate. The Senators who were called out one after the other,  by the  presiding officer of the election  at the Senate to cast their votes on the floor of the Senate did not hesitate in doing so.  The 107 Senators may have voted according to party divide  going by the scores of each of the Candidates.

There are indications that Ekweremadu ,  for instance, may have lost some of the  votes from the PDP fesh and ranking Senators  who were not happy that he  had occupied the position of the deputy Senate President since the  fifth  and 8th Senate and therefore, should give room for  another person  person to occupy the position   for a change. He may not have the read the hanwriting on the wall as Goje did, as he accepted his nomination for the position and proudly came out to address the Senators on why he should be voted as the deputy  Senate President.  It was therefore not surprising why Omo-Agege  scored 69 votes to his 28 votes, described  in political circles as a humiliation considering how he emerged in 8th Senate despite opposition from the Presidency.

Political watchers believe that if the ranking Senators were satisfied  with the performance of  the   Saraki and Ekweremadu leadership, they would  have molised the first time Senators to support him to defeat  the APC  Candidate, . But the APC , Candidate eventually won him in  the election to occupy the Seat of Deputy Senate President.

Earlier , Lawan, may have  shown to  Ndume, described in political circles , as a very inconsistent politician with a wide margin to clinch the Senate President. He had polled 79 votes to Ndume’s 18, an indication that most  PDP, Senators , who he had hoped will support him had  voted massively for Lawan, the adopted APC , Candidate , anticipating placement in juicy Committees. The  emergence of Lawan  as the Senate President may have thrown the Borno state in  jubilation as  indigenes described him as a man of the people amidst cheers.

The voting pattern in the Senate was not different from that of the House of Representatives. Despite the initial  Campaign of calumny mounted against Femi Gbajabiamila, the President and Tinubu, a former governor of Lagos state  adopted Candidate,by those opposed to him  over his alleged conviction in the United States of America, USA, he sill polled  281 votes to beat  Mohammed Bago,  his closest rival  who got 76 votes.  Mohammed IDris Wase, a Plateau state born politician, from Wase , local government who  may have  won the heart of the President because of his conduct in the House has ran a joint ticket with Gbajabiamila,   the  Speaker-elect of the House.  He succeeds Yusuf Lasun from Osun state, south west Nigeria.

The President  who could  not hide his feelings that the party adopted Candidates emerged victorious in the National  Assembly election described it as  a ”dew down different  from that of the immediate past”. He has saluted  the lawmakers and their parties , over  their” display  of patrotism and non-partisanship  before and during the election”, noting that  the” voting process was vey transparent  and fair in nature”  as the losers congratulated the winners. ‘It is a plus for the democracy being practiced in the country ‘, he had said.

Uche  Secondus, the National Chairman, PDP, thinks differently. He  is not happy that the President and the APC ,NWC, were instrumental,  in the election of the principal officers of the 9th Assembly , stating  that the ”doctrine of separation of powers must be respected and guided to avoid dictatorship”.

The PDP National Chairman fears   that given the dictatorial  tendencies of  the Buhari Administration seen in the last four years, and his continuous propensity  to disregard  the  rule of law and the principles of democracy, the country may be worse for it in the next four years, now that that his loyalists are at the helm of affairs in both the Senate and the House of Representatives.

According to him, the President and the APC,NWC, had used intimidation and coercion  against the   legislators who were  not ready to  do their bidding  in their desperation  to ensure that the party  adopted Candidates emerge as  the new leaders of the upper and lower legislative Chambers. Given his assessment of the election, he said  , the presidency and the party NWC,  arm twisted  the technocrat officials  of the NASS    to fashion out  rules that favoured the party.

The PDP National Chairman,  insists that the Presidency  has finally achieved   their long time plan  of taking over the 9th NASS which began  in August last year   during the state sponsored stealing  of the Senate mace  and the aborted seizure of  the 8th  Assembly. An aggrieved Secondus, the PDP , opined that  the country may be  heading towards a” full blown  dictatorship” which many believe are only noticeable in military dictatorships.

Given the position of the PDP National Chairman on the elected  NASS leaders, nobody  expected the party  to Congratulate them or wish them well in their new assignment but the party did so. Kola Ologbondiyan,  the party  National Publicity Secretary had issued a Statement  last Tuesday, in Abuja, where  the party  had” acknowledged  the newly elected Senate President, deputy Senate President as well as the newly elected Speaker and deputy Speaker  of the House of Representatives respectively, on their new positions”.

The party was said to have   urged the  lawmakers , particular, the principal officers,  to” uphold the tenets of democracy and the dictates of the Constitution”, without allowing themselves to be manipulated by the Presidency.

Indeed, the Presidency, and the National Assembly officials  performed their first official function together, with smiles and laughter at the  Eagle Square, Abuja,  at the 20th, June 12, democracy day celebration and the first to be officially celebrated  in the country  since the amendment of  the Public Holiday Act by the 8th NASS, which had been signed into law by the President.