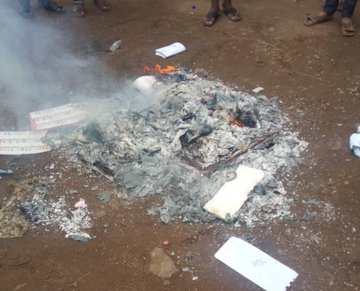 Until 12 noon , there was no sign of trouble in many pooling booths in various parts of the country as people trooped out en-masse to vote for the Candidates of their Choice. The Independent National Electoral Commission, INEC, were said to have extended the voting time of pooling time of voting centers  which lost time because of late arrival of  voting materials. There was expression of joy on the faces of the electorate who voted because of the  security arrangement put in place in place by Mohammed Abubakar Adamu, acting Inspector General of Police, IGP, and Tukur Buratai, a Lt General and Chief of Army staff .

Adamu and Buratai, may have heard good intentions for the conduct of the general elections but that could not be said of the officers.  The Value News witnessed  at Okota, Lagos state, where a ballot box , was carried out and all the ballot boxes, removed and set ablaze under security operatives watch. They had watched the ballot papers burnt to ashes, fueling speculation that that they have a working agenda to ensure that President Muhammadu Buhari of the ruling All Progressive Congress, APC, was returned to power. The officers who were armed to the teeth never allowed angry voters to put out the fire. The burning of the ballot papers by  the party thugs under the close watch of security operatives was happening in a state under the firm grip of Asiwaju Ahmed Bola Tinubu, Chairman,APC , Presidential Campaigns Council and Babatunde Fashola, minister of Works, Power and Housing  and Director of Planning , APC , Presidential Campaigns Council.

political watchers argued that the action of the security operatives was contrary to the earlier promise of Mohammed Abubakar Adamu , acting Inspector General of Police, IGP, and Tukur Buratai, a Lt. General and Chief of Army Staff that security operatives would be neutral during the elections.

The situation was worse in Rivers state where an INEC official explained that the electoral materials for the  Presidential and National Assembly elections which we had distributed and shared in my office  in the presence of all the political agents and security agencies including a  DCPO, for this Super RAC, had not arrived these voting centers. The Okirika police station  CPO and other security operatives were said to  have assured the INEC officials that they would escort the materials to the Okirika Super RAC enter  for onward distribution to the wards in readiness for actual voting the next day, Saturday, February 23, 2019 . they were said to assured the Commission officials that they have no cause to worry. That was how far they could go.  The electoral materials may have been hijacked on the way by party thugs to weaken Nyesom Wike , the People’s Democratic Party , PDP, governor of the state  who is seeking re-election support base.

It was not surprising why the materials could not be supplied to wards 6-9 in the Okirika local government. The INEC, official who was in Okirika on a fact finding mission based calls received from angry adhoc Staff  said he was surprised that the electoral materials  have not arrived the voting centers despite the promises by the security operatives who had escorted it from his office to do so. the electoral materials were said to have disappeared into thi air on Friday, February 22, 2019.

Quoting  the law setting up INEC, he assured the electorates that  since the electoral materials have not arrived as expected it has been  trashed.  According to the electoral law where electoral materials are not seen, the election would be postponed.   The question on the lips of most people was why security operatives could connive with party thugs to hijack electoral materials meant for some wards in Okirika local government, Dame Patience,  Former president Goodluck Jonathan’s wife and then First Lady, who is an arch supporter of governor Wike.

Note that on Thursday, February 21, 2019, on his way to visit some PDP Leaders in the state , he he was trailed by a vehicle with its occupants suspected to be soldiers from  the 6 Division armed to the teeth.  Going by the governor’ account but for the alarm raised by his security details who asked , what is going on, what is going on, he would have been killed.

In Bayelsa state, security operatives were found to have helped party thugs to hijack ballot boxes. The situation was  the same in many other states in the south, where Atiku, the PDP , Presidential Candidate has a very strong support base, an indication that the security agencies may have been  acting out a script to  return Buhari to power. The election was calm in Katsina , Buhari home state  as reported by Usman Bello, a retired Comptroller of Nigerian Customs Service, NCS, and district head of Kankara, who was said to have taking advantage of voting  in his district Headquarters to inspect on polling centers to ensure that the elections was going on smoothly. The Monarch confirmed that the election went on smoothly in the state. This is the situation other parts of the north.