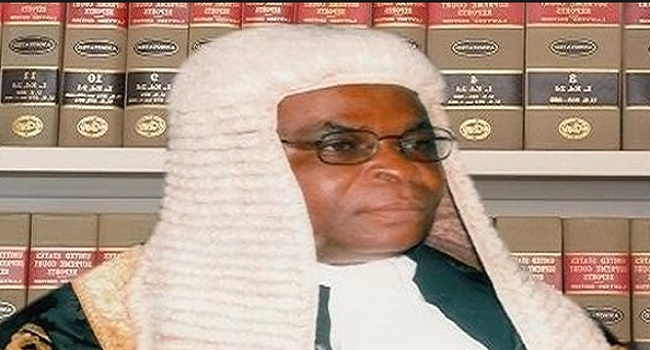 It did not come to many as a surprise when information filtered out  that Walter Onnoghen, the Chief Justice Of Nigeria, CJN, who was suspended by President Muhammadu Buhari on the advice of Danlandi Umar, Chairman of  the Code of Conduct CCT,  over alleged false Declaration of Assets and Corrupt enrichment could bow to pressure to resign his appointment.

that the embattled  CJN  was on his way out from the pronounced when the National Judicial Service Commission, NJC,  stepped into the matter by setting up a investigate the allegations against him and Tanko the acting CJN, and make their recommendation. The  duo said to have appeared before the Committee at different times to answer to the allegations in the petitions written against them  The Committee may have carried out its investigation without bringing the Presidency into it to avoid been labeled as a mere rubber stamp.

The NJC was said to have conveyed their Onnoghen, and acting CJN, after the Committee had submitted their report.  Soji Oye, the NJC had said that because of the nature of the decision  that  ”it would conveying it to the

It was reported that before his departure to Jordan, in the Middle East, the NJC, had also sent  the Council’s rreport and decisions on  the  suspended CJN and  Tanko, the acting CJN.  Presidency sources said   the  NJC’S report and decisions   were sent to him through  Abba Kyari, the Chief of Staff, regarded as a power broker in the Presidency . He was said to have been accompanied by Abubakar Malami, the Attorney General and minister of Justice.

The Value News was informed that the  Council report and its agreed decisions were conveyed to the President for approval.   Note that that the Council had  cued  into the recommendation of the five -man Committee   the  duo, Onnoghen and Tanko, the acting CJN. This may have informed the reason why it forced the Cross River state embattled CJN to  resign his appointment  .

have tendered his letter of resignation Thursday, April 4, 2019, thus ending several months of litigations in the Court over his trial at the CCT.  But the Presidency appears to have kept a sealed lips on the matter heating up the polity.

This is evident going by the response of Femi Adesina,  a Senior Special Assistant to the Media and to the alleged resignation of the suspended CJN. Adesina had he appeared in Channels the the suspended CJN’s reported resignation. He disclosed that he had met the Friday, April 5, 2019,  but they didn’t talk ”a sealed lip or not CJN.

Although information about the embattled CJN resignation still remain   sketchy, Maman Tahir,  a Professor and Vice  Chancellor of  Baze University, a private sponsored  University   said the CJN resignation came too late.  According to him, the embatled CJN ,  ought to have resigned his position  earlier before  his trial   at the CCT instead of allowing himself to be forced out by the NJC.

Tahir, who is a Senior Advocate of Nigeria, SAN,   noted that the trial of Onnoghen   , the CJN,  would not have been in public domain  if he had relinquished his position earlier.   He fears that the resignation may not be effective  because he had not resigned before the NJC took the decision,  an indication that he is at the mercy of the President  whether to” accept or reject that decision on his part” .

The legal luminary stated   that  the resignation may  face complication  for  him    since  he has not resigned before the NJC took the decision.  Apart from the petition written by  Dennis Aghaya,  Executive Secretary of the Abuja based  Anti-Corruption  Data Based  Initiative and Research which had started the troubles for his greatest problem was said to have the Ibrahim Magu led Economic and Financial crimes Commission, EFCC.

The according to sources had actually laid the foundation for the problem the foundation for the resignation of the  CJN  The Commission was said to have begun a secret investigation on his Accounts both local and domiciliary and his other foreign transactions ostensibly to justify why he has to be sacked or forced to resign.

Recall that the Commission had submitted its was a product of three years of investigation on Onnoghhen to the Katsina state born Nigerian January 30, 2019. The anti-graft agency was said started on him before his appointment as acting CJN in 2016 and in 2017.

The Commission,   had  investigated  his transactions with the  Nigerian Stock Exchange, NSC,  Central  Security and Clearing System, CSCS,  to get details  of high yield  stocks  and bond options  held in the Capital Market to have something incriminating to nail and thus force him .

it was also said to have beamed its searchlight   on the country’s Discount Houses  to check his ”transactions history in Treasury bills  and how such instruments were financed. The  investigators were   said  to have reached out   to the Abuja Geographical Society, AGIS,  to obtain his  list of properties, Vehicle Inspection office, VIO, to know the exotic  vehicles owned by him, and the Nigerian Customs Service , NCS,   to know his currency declarations  for movements  outside the country.

It may have found within its three years of  secret investigation of the  CJN,  that he has  major investments  in”Life  Friend PLC, agricole, Lloyds and Pur Noble which were foreign Companies  which was yielding him thousands  of dollars annually.  The Companies were said to have paid  $121,116 and $482,966  respectively into his  domiciliary   accounts  that   was said to have a  yearly turn- over of  55,154 Euro between 2013 and 2016,  His choice property in  Maitama , a high brow area of Abuja, speaks volume.

The Commission may have come to the conclusion   that the cash flow  to the embattled CJN’s accounts  could not be justified by his monthly salary  of about N751, 082.37 or an annual Salary of  N9, 012,988.44 , was an idictment on as a Corrupt  government official .

Political watchers believe that if the NJC had not been forced out of office by the NJC,, there are possibilities that  Buhari, who won his re-election bid in , Presidential election  may have tinkered with the option of sacking him  going by the damning  evidence in the EFCC report about  him which c be a dent on  his legal career.