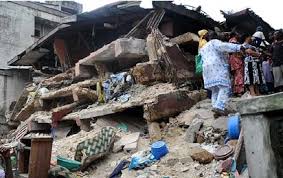 Lagosians were stunned again on Wednesday March 13, with the news of a collapsed three-storey building in Lagos Island. The incident which occurred in the morning involved a building on 63 Massey Street, Ita Faji area of Lagos Island.

The building housed a school, Ohen Nursery and Primary school, shops and residential apartments. A total of 18 persons were said to have lost their lives in the unfortunate incident. Sadly among the dead were Nursery school pupils of Ohen Nursery and Primary school. Government rescue agencies that worked for 72 hours to evacuate victims from the rubbles also put the number of those rescued as at Thursday (March 14) evening when the exercise stopped at 50.

The building according to residents may have collapsed because of its dilapidated state. They also alleged that government officials responsible for inspecting and certifying buildings for habitation in the area have always turned blind eye after being bribed by the owners.

The owner of the building named Ehaemuron was also said to be a victim in the incident though he  survived. The building was under the management of a developer, who was supposed to manage it for 10 years.

Expectedly, the incident has reverberated  blame game as has always been the case in previous incidents. Whereas many blamed the owner of the house for using inferior materials to build the building to save cost, others blamed government and officials in charge of building plan not being alive to their responsibilities. Some people curiously blamed the parents of the kids in the school for sending their children to a school in such a building. Again in the same light, many also tongue lashed the proprietor of the school for renting the relatively dilapidated building to operate his school more especially the school that is pupil by kids of 2 to 10 years on the third floor of the storey building said to be 30 years old.

Beyond the blame game, another usual scenario that has played out which has been a recurring decimal is the crocodile tears from Government officials and political office holders expressing regret at the unfortunate incident which sent to early grave school pupils with the mother of two of the dead school pupils of the school reportedly committing suicide.

Governor Akinwumi Ambode of Lagos did the usual thing by describing the incident as unfortunate and commiserate with the families of those that died, promising an investigation and to sanction those found culpable. He said most of the buildings in the area had been marked for demolition, but the owners had defied demolition notices, that henceforth structurally defective building would be demolished. He promised to foot the bill of those injured” This is unfortunate but we will investigate what has happened and also see the punishment for whoever are the culprits”.

President Muhammadu Buhari also joined the fray, he said he was extremely saddened by the collapsed which claimed lives including school children. He condoled with the families of the victims and the Lagos State Government.

The president asked the state government to put structures in place so that such tragedies did not occur again. Senate president Bukola Saraki also consoled the families of those who were affected by the collapsed.

Not left out was the Speaker of the House of Representatives, Yakubu Dogara who expressed deep sadness over the death of the pupils following the collapsed of the building. Dogara, Special Adviser on Media and Public Affairs Turaki Hassan said it was heart breaking that innocent souls would perish in such a dreadful manner and called for thorough investigation of the unfortunate incident. This is one too many of these building collapses that usually claim the lives of innocent people. It is time for decisive actions to be taken against all found culpable of breach of building standards that end up in disasters.

For many concern Nigerians it has always been the culture of government officials to cry crocodile tears when incidents of this nature occur with the usual promise to set up an enquiry and punish those found guilty and after that nothing happens again.

On why government officials dilly dallying in carrying out demolition of marked faulty structures only to wake up when such building collapsed, he blamed it on resistance by landlords who resort to legal tussle with government to present the demolition of the structures.

” I can say that the owners and tenants are recalcitrant, in as much as we try to evict them, they continue to evade arrest and go through the back door and we feel that this structure might go down as soon as possible and that is why we have to bring them down”. Stressing on the legal road block he said ” There is a lot of legal tussles that relate to demolition we always have to get court”.

He said government was ensuring the tenants in the buildings marked for demolition are evacuated. Apart from the buildings that are being demolished aftermath the collapsed structure, Governor Ambode has vowed to demolished all faulty structures housing schools especially storey buildings. He said government will carry out a general assessment across the state not only in Lagos Island.

Inspite of this, many concern Nigerians look at the current action of Ambode like a fire brigade approach which could only be described as a ‘drop of tea in the ocean’ given the fact that such deadly structures are abound in the state.